Green clearances are being increasingly treated as a mere formality

In the garb of streamlining green clearances, the Union government has sidelined communities and diluted environmental regulations over the past four years

When the National Democratic Alliance (NDA) came to power in May 2014, riding on a public sentiment for change, we, as researchers on environmental governance, nurtured a fear: the overtly business-friendly government would dilute environmental norms.

The previous government, the United Progressive Alliance (UPA) in its first term, had brought in legislations, such as the Environmental Impact Assessment Notification (2006), to tighten environmental impact assessment process, and introduced rights-based legislations, such as the Scheduled Tribes and Other Traditional Forest Dwellers (Recognition of Forest Rights) Act (FRA), 2006, and the Right to Fair Compensation and Transparency in Land Acquisition, Rehabilitation and Resettlement Act, 2013, empowering gram sabhas (village councils) to give consent for development projects that involved forest diversion and land acquisitions. But in its second term (2009-14), UPA started diluting these legislations. The fear was that NDA would continue with the same approach. It has come true.

Just four months after it came to power, NDA set up a High Level Committee on Forest and Environment Related Laws, headed by former cabinet secretary TSR Subramanian, to propose reforms to India’s complex and much-maligned environmental clearance (EC) and forest diversion processes, and other environmental laws. However, no such overhaul happened. The Parliamentary Standing Committee on Science and Technology rejected the Subramanian committee’s patchy recommendations in July 2015.

Moreover, in the past four years, the Union Ministry of Environment, Forest and Climate Change (MOEF&CC) has deluged us with amendments and guidelines in two key laws related to EC and forest diversion—the Environmental Impact Assessment (EIA) Notification (2006), as developed under the parent Environment (Protection) Act (1986), and the Forest Conservation Act (1980). Green clearances are being increasingly treated as a mere formality.

The first change came the week the NDA government took office. On May 30, 2014, MoEF&CC did away with EC public hearing requirement for coal mining projects with specific capacity expansion. Two more notifications to provide relaxations to developers followed in the next four months. In July 2017, the Expert Appraisal Committee (EAC) of MoEF&CC exempted companies from undertaking public hearings for up to 40 per cent capacity expansion for coal mining projects (see NDA v UPA). 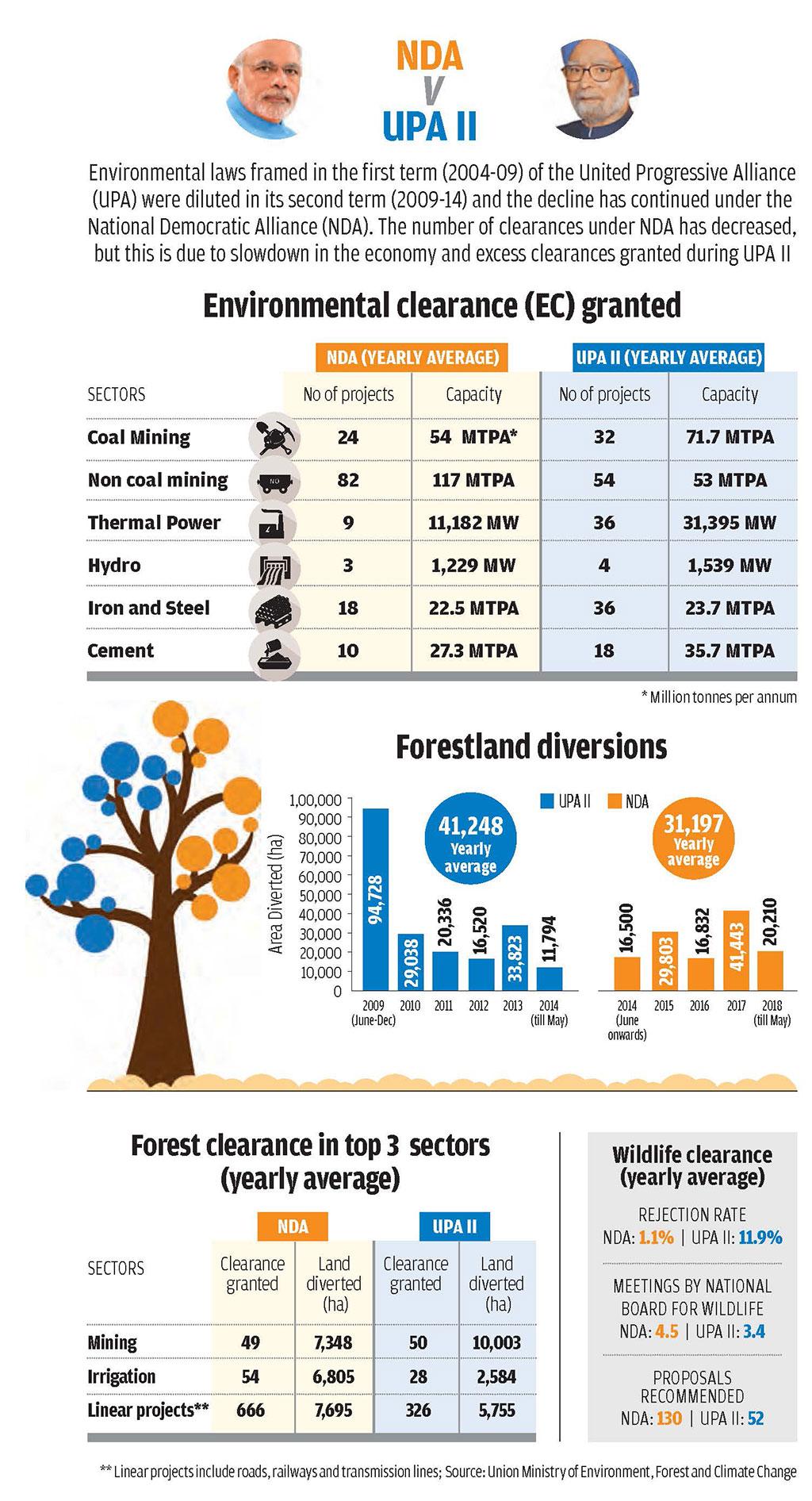 So while the scope of people to voice concerns has been restricted, the government has remained sensitive to the need of the developers. For instance, in October 2014, MoEF&CC issued guidelines to give developers an “opportunity” to present their case while proposals for forest clearance (FC) were being reviewed by the Forest Advisory Committee (FAC) at the Centre or the Regional Empowered Committees (RECS) at MoEF&CC’s 10 regional offices. The government, however, has not shown similar enthusiasm for another important aspect of the FC process—the settlement of forest rights under FRA. While such rights must be settled before a Stage 1 FC is given, this is not being done.FC is a two-stage process: in Stage I certain conditions are stipulated, such as compensatory afforestation, and upon compliance of those conditions, the Stage 2 clearance is given. Even in January 2018, the Union Ministry of Tribal Affairs asked the MoEF&CC to ensure this, without any success.

The government has used decentralisation as a key policy move to expedite ECs and FCs. For ECs, development projects have been increasingly placed under the ambit of state-level authorities, such as state expert appraisal committees (SEACs) and state environmental impact assessment authorities (SEIAAs). These include projects in sectors such as thermal power, irrigation/river valley and construction. Simultaneously, district-level authorities, such as District Environment Impact Assessment Authority (DEIAA) and District Expert Appraisal Committee (DEAC), have been created to deal with ECs pertaining to small-scale mine leases. Amendment to the EIA Notification in January 2016 made EC compulsory for mining of minor minerals in areas less than or equal to 5 ha, which these authorities will clear. They have also been charged with ECs for clusters of small leases, where the cluster size is over 5 ha but less than 25 ha, with no individual lease being over 5 ha.

In case of FCs, the focus of decentralisation has been on linear projects, such as roads, transmission lines, canals, pipelines and railways. In October 2014, the Forest (Conse rvation) Rules (2003) were amended to give RECs the power to grant FCs to all linear projects.

While the idea of devolving power is not problematic per se, it should only be done after adequately enhancing the capacity of the respective authorities. But this has not h­a­­­­­­­­­­ppened and the assessment process has remained weak. For example, a state-wise review of the meeting minutes of SEACs and SEIAAs in key industrial states, such as Gujarat, Karnataka and Tamil Nadu, shows that these authorities sometimes review over 50 project proposals in a day. The rejection rate at the state level has been a mere 1 per cent in the past four years.

The question about quality of project assessment before it is cleared is a concern at all the levels and for all types of clearances. The slew of notifications issued by the government does not reflect any intention to insist on “comprehensive assessment” before projects are cleared, or to ensure compliance and monitoring once they are in place. In fact, the changes that have been done are primarily for the convenience of the developers and to reduce clearance time. A prime example of this is the de-linking of FC and wildlife clearance for projects within ecosensitive zones. Earlier, FC was contingent upon the developer obtaining a wildlife clearance from the National Board for Wildlife. But this was done away with in August 2014.

The drive to make way for developmental projects is also weighing on most sensitive wildlife habitats, such as Protected Areas (PAs). In April 2015, the government introduced a provision of “most exceptional circumstances” to allow use/diversion of forests within PAs. But there is no clarity on what constitutes such cases.

Equally poor is the government’s compliance and monitoring mechanism. A review of monitoring reports made available by the 10 regional offices, shows that for projects granted EC since 2014 in major development sectors, there are barely any reports available. Compliance is completely dependent on submission of periodic compliance reports by developers, the availability of which are equally poor, and those submitted often go unverified. For FC, there is no monitoring report available in the public domain.

The government also seems to be adopting a reconciliatory approach towards the violators. In March 2017, MoEF&CC issued a notification giving a six-month window to project proponents who have been operating without obtaining an EC to apply for the same.

The pretext under which this was allowed was to improve “compliance”. While at that time it was said that all such violations, irrespective of size and capacity, will only be reassessed and cleared at the Centre, due to the extremely large number of such cases coming up, the government decided in March 2018 to allow SEAC/SEIAA to decide on them, depending on their size and capacity. This is at a time when the capacity of these authorities even to clear regular projects is questionable. Projects in violation of coastal regulation zone clearances have also been given a second chance. In March 2018, MoEF&CC issued a notification in this regard.

The situation is clearly dire. The four years indicate that not much thought has gone into improving the green clearance mechanism. The government still has nine months to revisit its promises.