Illegal and unfair acquisition of mining land in Korba 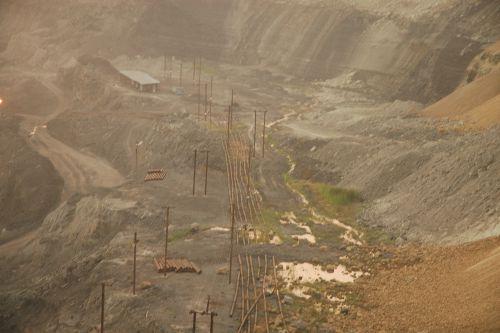 Dilharan Sarthi recalls the time when land acquisition first took place in his village, tracing his memories back to 1980. He resides in Pali village located in Korba district of Chhatisgarh, that witnessed the first phase of land acquisition under Coal Bearing (Areas Acquisition and Development) (CBA) Act 1957 around that time. More than three decades have passed since then but villagers’ trouble continues. “Farmers in Korba sacrificed their land thinking about the nation’s future and development. Our farmers treat their land like their own parents. If they cannot secure their and their children’s future even after giving their land—their main source of livelihood—then there is some serious problem. The profit has to be shared with the people who have parted with their land,” says Sarthi.

Korba witnessed a massive protest on May 2, 2016 against land acquisition for mining by South Eastern Coal Fields Limited (SECL)—a flagship subsidiary of Coal India Limited (CIL). Around 679 protesters from 41 villages were arrested, including the sitting MLA Jaisingh Agrawal, however they were released later. As has happened in the past, the administration had put prohibitory orders under Section 144 in The Code of Criminal Procedure, sensing further protest from locals.

The coalfield has been exploited for decades. Its expansion may swallow the lands of many, including people belonging to scheduled caste and scheduled tribes. Meanwhile, proper compensation and rehabilitation has still not been granted to those who were moved when mining land was first acquired, in the 1980s.

The power hub of Chhattisgarh, Korba district, is situated two hundred km from the state capital Raipur. It has seen rapid industrial growth in the past 15-20 years due to coal mining. Currently, there are seven coal mines, 12 thermal power plants and other industries operating within 25 kilometres of the district.

Gevra opencast coal block is located in the south-central part of Korba coalfield , that also includes Dipka and Kusmunda mines. It is one of biggest coal mines in the country—with an estimated 10,000 million tonnes of coal reserve and spread across almost 19.03 sq kms. In 2011-12, this project contributed a little over eight per cent of CIL’s annual production of 435 metric tonne and approximately 15 per cent of the company’s pre-tax profit of Rs 8,606 crore.

The forest land around Podi, Ralia and Amgaon villages is crucial to their largely ST and SC inhabitants. The forest land is used by the villagers for grazing cattle, collecting fuel, forest products and cultural activities, making them heavily dependent on it. The SECL's proposal plans to use this for mining, depriving locals of their livelihood and way of life, undermining their forest rights.

The recent protests are an outcome of growing discontentment regarding compensation, resettlement and rehabilitation.

Initially, SECL was reluctant to accept “The Ideal Rehabilitation Policy 2007 (Adarsh Punarwas Niti 2007)” passed by Chhattisgarh government and chose its own resettlement and rehabilitation policy brought from time to time. In a rush to expedite the land acquisition process, the company announced land compensation ranging from Rs 6 to 10 lakhs in 2011 depending upon the fertility of land, as per the Chhattisgarh Rehabilitation policy. However, the demand of jobs for one member from each of the displaced families was not fulfilled. SECL gave priority to big land owners and excluded girl children from the provision of jobs. As of now, only 179 people in four villages of Pori, Bhagora, Bahanpat and Raliyal have been given employment. Total claims for employment in the region have been close to 500. The situation in other villages continues to be similar.

Dilharan Sarthi adds, "Initially when the company started acquiring land around 1980s, they discussed the benefits of mining in village meetings and even gave jobs to marginal land owners having less than ten decimals of land (100 decimals equal an acre)."  Things have changed over the years as the company has adopted capital-intensive methods for mining, with minimum requirement of labour. Farmers were forced to give up their land without an alternative source of livelihood; this has made the protests fiercer.  As per media reports, the root cause of the problem lies with early notification for land acquisition by CIL in 1980s and delaying it for actual possession of land.

SECL notified section 4 (i) under CBA Act 1957 in Bahanpath and adjoining villages for the expansion plan of its Gevra coal mine in 2011. The villagers rejected the compensation from SECL as the management only wanted to pay the land price as per the state government’s policy and had refused to give job to the affected people.

The expansion of the Gevra mine, one of India’s largest open-cast coal mines, threatens thousands of families who are already impacted by air pollution, depletion of their water resources and loss of common lands.  India’s Central Pollution Control Board ranks Korba among the country’s most critically polluted regions.

Apart from the 12 thermal power plants producing 9000 MW power in the city, there are various new coal mining and thermal power plants that have been proposed in Korba. The cumulative impact of these industries has made this region critically and highly polluted, as declared by Ministry of Environment, Forest and Climate Change in 2010[G3] . A moratorium was imposed on 13.01.2010 for setting-up of new industries, but it was withdrawn in 2013[G4]  even though the district’s ambient air quality, water bodies, land, agriculture and health of the people reel from environmental pressure.

Although the mining land in Korba was acquired through CBA Act 1957, it is mandated that compensation and rehabilitation should be provided under the new Land Acquisition Act, 2013. Undermining this law, the SECL has followed its own rehabilitation provisions. As part of Coal India's latest policy of 2012, SECL will give one job per two acres, leaving small landholders without a job. The rest have been offered livelihood compensation of Rs 5 lakh per acre, which the farmers have rejected as too low.

Acquisition of land and departure from procedure

Land acquisition for the block was done primarily under Coal Bearing (Areas Acquisition and Development) (CBA) Act, 1957 and partly under Land Acquisition Act, 1894.  Around 3,000 hectares of land was made available to the Gevra mine during 1980s. In 2011-12, SECL had shovelled out last of the coal reserves from the mining area.

In 2009, the then Ministry of Environment and Forests had permitted SECL to expand its production from 35 metric tonnes per annum (MTPA) to 40 MTPA, which could lead to the eviction of over 5,000 people from their homes in over 18 villages. Dwellers of these villages include Kawar, Gond and Korwa Adivasis (indigenous tribes) and dalit families.

A Public Interest Litigation (PIL) filed in Chhattisgarh High Court by a local non-profit, Sarthak Srijanatmak Sanstha, claims that multiple laws have been violated during the acquisition. It mentions violation in the provision of CBA Act 1957, PESA Act 1996 and Forest Rights Act 2006.

A notification under the Section 4 (1) of CBA Act was issued in 2001 for acquiring land in five villages–Podi, Ralia, Bathora, Wahanpath and Amgaon for the expansion of SECL’s Gevra open cast mining project. However, as per the act, the land can be taken over only within a period of three years of the notification. By acquiring the land after a gap of 11 years, SECL has violated the law.

The Chhattisgarh government has created land banks by taking control of land under various land acquisition laws like CBA Act 1957, Land Acquisition Act 1894, and Madhya Pradesh Land Revenue Code 1959. The land was then handed-over to private players. “In many of these cases the land was being acquired under urgency clause and in the name of public purpose,” says Lakshmi Chand Chouhan, secretary, Sarthak Srijanatmak Sanstha.

If a region is notified under section 4 of the CBA Act, sale of that land is banned, with immediate effect. The owner cannot sell any portion of this land, howsoever pressing the financial need.

Korba qualifies as 5th scheduled area, with 41.5 per cent of its population falling under the scheduled tribe category, as per census 2011. Due to this status, the Panchayats (Extension to Scheduled Areas) (PESA) Act, 1996 mandates consultation with the gram sabha or the Panchayat before land acquisition. However, the SECL has not followed this procedure, claiming that Coal Bearing Act 1957 applies in this scenario and not PESA. SECL has been following the CBA since its promulgation, which does not takes the consent of gram sabha or the owner of the land , and the prices of the land given to affected people are dynamic and changes time to time, as dictated by the company. The district collector of Korba, in 2012, stated that SECL must follow PESA Act. Implementation of PESA should have been coordinated by the state government, but it has remained silent on this matter till date and SECL still continues to violate PESA.