The global crash in aluminium prices, triggered by overproduction in China, is forcing Indian companies to shut down operations. The solution may lie in recycling the metal 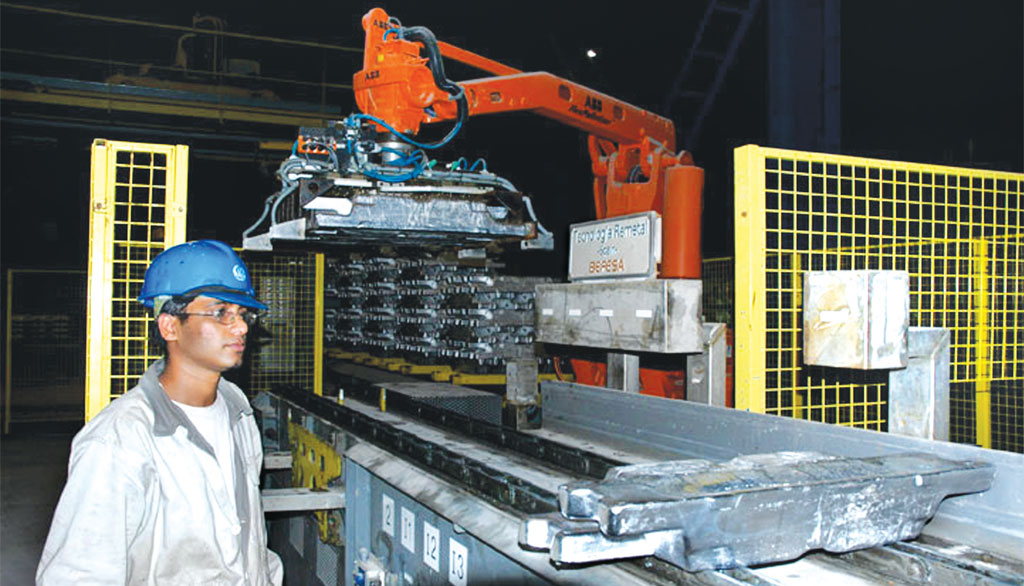 On September 9, the Bharat Aluminium Company Ltd (BALCO) informed the labour commissioner that it had started shutting down its rolling plant at Korba in Chhattisgarh as aluminium prices had crashed in the international market and there was shortage of bauxite ore, the raw material for aluminium. The decision triggered protests among plant workers, who have moved the labour court against the closure. BALCO is co-owned by Sterlite Industries India Ltd, a subsidiary of Vedanta Resources, and the Union government.

Sources in the company say Vedanta is also planning to shut down its Lanjigarh aluminium refinery plant in Odisha by December. Closure of the plants would render 1,750 people jobless.

The local people, who had parted with their land to set up Vedanta’s refinery, held a protest on September 3 against the shutting down of the refinery. They also wrote a letter to the state government and Vedanta asking them not to shut operations. According to Uday Kumar, president of Vedanta Land- Losers Association, the plant had given jobs to almost 1,000 people who had lost their land to the company.

The situation is no different in other aluminium refinery plants in the country. While Hindalco Industries Ltd of Aditya Birla Group is incurring heavy losses, the Union government has deferred its disinvestment plan for two plants of the National Aluminium Company Ltd (NALCO) till next year. Officials of the Union ministry of mines (MoM) told Down To Earth that the decision was taken after nalco’s share prices fell sharply at the Bombay Stock Exchange on September 7. At the current market rate, the 12.5 per cent stake sale in nalco would fetch Rs 865 crore, roughly half of what it would have fetched in September 2014, they say.

This perilous situation, says the Aluminium Association of India (AAI), has arisen because aluminium prices have hit a six-year low due to overproduction in China.

Prices are expected to fall further to US $1,500 per tonne, as China starts exporting three million tonnes of aluminium stashed in its warehouses at an even cheaper rate.

Chinese trigger
China, which has been expanding its infrastructure over the past decade, is the world’s biggest consumer of aluminium. It started overproducing the metal, thanks to cheap land and labour and government subsidies.

The country today controls over half of the global production and dominates the estimated US $100 billion aluminium industry that produces the metal for an array of products, including cars, cans, railway coaches, aeroplanes, windmill blades and high-tech electronics such as smart watches.

The problem began when the world was recovering from the global financial crisis around 2009. During this time, China started building an inventory for its domestic industry by buying bauxite from India and Malaysia. This led to an oversupply of the metal in China’s domestic market. China’s metal demand experienced a crash in the first half of this year after its economy began to slow down—its GDP growth rate has fallen from a peak of 14.2 per cent in 2007 to seven per cent in June 2015. 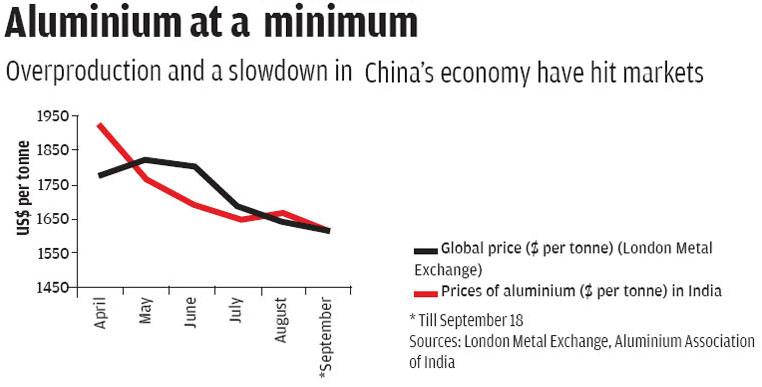 This economic turmoil led to a slowdown in Chinese demand, causing a steep drop in metal prices, says Rahul Dholam, senior research analyst of Mumbai-based financial consulting agency, Angel Broking. By early June, aluminium prices began to plummet at all metal exchanges in China. Fanya Metal Exchange, which was storing the metal as collateral for loans, had to wrap up its business. Its head, Shan Jiulang, who was absconding, has been nabbed by the police. The crash had global repercussions. By July, prices fell to US $2,000 per tonne at the London Metal Exchange, the main trading platform for aluminium (see ‘Aluminium at a minimum’).

India could not remain immune from this international turmoil. Owing to cheap availability of aluminium in the international market, Indian companies imported the metal, mostly from China and West Asia, rather than domestically producing it. The share of aluminium imports is 56 per cent.

As per aai, the share of domestically produced aluminium in domestic consumption reduced from 66 per cent in 2008 to 44 per cent in August 2015.

In fact, the situation has worsened. “Today, it costs US $1,800 to produce a tonne of aluminium, while its market price is around US $1,640. This is unsustainable,” says Abhijeet Pati, president of AAI. This trend is likely to continue till 2016, he adds. On September 1, AAI representatives met Principal Secretary to the Prime Minister, Nripendra Misra, and hinted at resorting to production cuts and retrenchment if the government does not immediately raise import duty on aluminium from the current five per cent to 10 per cent to protect the domestic market from increasing imports.

“A rise in import duty of finished aluminium would protect domestic manufacturers,” says Satish Pai, managing director of Hindalco. The Union government is yet to indicate any changes in the import duty. “Secondary aluminium companies that depend on aluminium scrap imports do not want the duties to be raised,” says Balvinder Kumar, secretary of mom.

Scrap alternative
As the aluminium crisis is set to continue for a prolonged period, the question arises whether it is essential to mine or import bauxite when a surplus of aluminium scrap is available in the domestic market? Every year, India imports 860,000 tonnes of scrap aluminium, which is used in the foundry and extrusion industries. Domestic generation of scrap is almost nil. Big companies like Vedanta and Hindalco have set aside aluminium scrap for captive usage.

So the trade is still limited to the unorganised sector, catering mostly to the utensil and casting industries. As of now, there is only one recycling unit of Hindalco in the organised sector at Taloja near Mumbai, with a capacity of 25,000 tonnes annually.

According to MoM, although the plant at Taloja was suffering due to want of scrap, the production from the unit has improved recently. The plant is now operating at 80 per cent capacity, as against its earlier capacity of 60 per cent. According Metalworld editor, D A Chandekar, aluminium recycling is less capital intensive than primary metal production and it involves only five per cent of the energy used to make new aluminium.

According to India Mineral Yearbook, published in May 2015, aluminium is 100 per cent recyclable and there is no loss of properties or quality during recycling. It also emits five per cent less greenhouse gases compared to primary aluminium production.

India produces roughly 0.6 million tonnes of secondary aluminium through captive processing of seconds and scrap imports. By 2019, it will account for 35-40 per cent of the country’s aluminium consumption, says the India Mineral Yearbook. It has been estimated that recycling will help preserve 600,000 tonnes of bauxite ores every year. As the world battles the plummeting prices, India has the potential to emerge as a leader by recycling aluminium scrap.