Mumbai tries pumping oxygen into the river to keep it clean

Until five years ago very few people in Mumbai were aware of the Mithi river running through it. Then, in the monsoon of 2005 it flooded, drowning 500 people. With the devastation it erupted into public consciousness, dark and stinking. Ever since the authorities have been trying to revive it. Their latest experiment is putting it on oxygen.

For three months oxygen was pumped into water along a kilometre stretch of the river to raise the level of dissolved oxygen.


Though the authorities are happy with the results, a section of urban planners is calling it a stopgap solution because the source of trouble, the city’s sewage, is still being dumped into it.

The Mithi forms with the overflow from Vihar and Powai lakes. After flowing for 17.6 km through the suburbs of Mumbai, it meets the Arabian Sea at Mahim creek (see map). Along its length untreated sewage is dumped at 43 places. This lowers the level of dissolved oxygen in the river. Oxygen is essential for fish, which eat mosquito larvae.

Last year in November, the Mumbai Metropolitan Region Development Authority signed an agreement with the US firm Environmental Consulting & Technology to clean part of the Mithi and beautify it on a trial basis. The three-month project began in December along the stretch behind the authority office at Bandra-Kurla Complex. “We chose this stretch because it is the fag end of the river, hence the most polluted,” Vikas Tondwalkar, joint project director of the authority, said.

The consulting firm is using its patented technology DynamOx (dynamic oxygen delivery). “Our technology infuses oxygen into the river, not air. Hence it is very effective,” said Satish Kastury, principal engineer with the firm. “Polluted water from the river is taken into machines and super saturated with oxygen. The water is then pumped back. This goes on 24x7.” The firm has rented out two units of DynamOx, each with a capacity to infuse oxygen into eight to 10 gallons of water a minute, for the pilot.

Kastury said the dissolved oxygen level in the kilometre stretch of the Mithi has gone up three times, to six parts per million, since the experiment began. The firm had used the same technology to clean the Rouge river in the us state of Michigan. “After 20 years of work the Rouge has been transformed from an open sewer into a vital regional resource,” said Kastury. People working at the Mithi site said the stench has decreased considerably and mosquitoes are fewer.

The cost of infusing oxygen for three months came to Rs 1.5 crore. Neither the development authority nor the consulting firm know how DynamOx compares with the conventional technology of sewage treatment plants in terms of cost. Tondwalkar said the authority plans to hire the National Environmental EngiNEERIng Research Institute (NEERI) for an independent assessment of the project and will look into cost comparison after the assessment. “This is a new technology and we wanted to test its efficacy. Based on their (NEERI’s) report, we will decide the course of action,” he added. 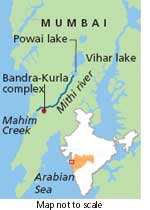 Urban planners are questioning the long-term effectiveness of pumping oxygen. “For how long can the consultants continue oxygenating the river? What is the point when untreated sewage is thrown into the river every day?” asked Roshni Udyavar Yehuda, head of Rachna Sansad Academy of Architecture, an environmental architecture institute. “It will make more sense to stop dumping sewage into the river.”

Kastury admitted it is crucial to stop sewage dumping. But that is something for government agencies to ensure, he said. The development authority refused to speak on the matter.