Much of today's environmental impacts originate in cities 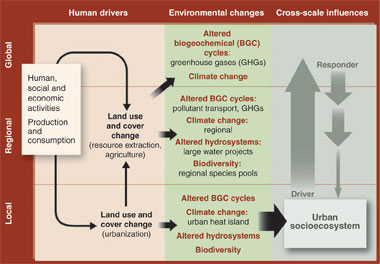 Cities are both drivers of and responders to environmental changes in rapidly developing countries like China and India. Unprecedented growth in urban population over the past century has occurred in less than 3 per cent of the global terrestrial surface. But their impact has been global, with 78 per cent of carbon emissions, 60 per cent of residential water use and 76 per cent of wood used for industrial purposes

Perceived opportunities in growing urban centres and lack of opportunities in rural settings resulting from degraded landscapes and economic imbalances have triggered migrations since 1950 and the trend continues.The concentration of transportation and industry in urban centres means that cities are sources greenhouse gases that cause climate change

In the past two decades, there has been large increase in the output of materials such as the food-waste and solid waste accumulation and growth in demand for building materials

City centres are physically hotter.Known as the heat island effect, urban and suburban temperatures are 1 to 6C hotter than nearby rural areas, says the us Environmental Protection Agency. Just one-degree rise in temperature can increase residential water use 1098 litres per month on average for a family

Within cities, urbanization and allied changes reduce species diversity and evenness. For example, urban sprawl in northern latitudes appears related to declines in abundances in some migratory birds in southern latitudes

Cities are also hot spots for solutions and problems. Urban ecology has a pivotal role in finding those solutions and navigating for a sustainable urban future