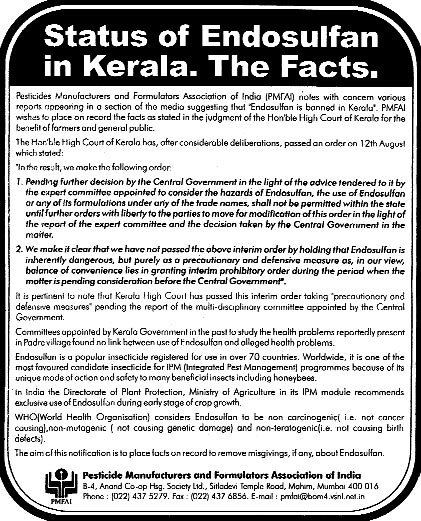 Pesticide industry is at it again. Placing advertisements in newspapers and bringing out 'selective' facts seems to have become their favourite indulgence. Sometime back it was 'A clarification on endosulfan' and this time it is 'Status of endosulfan in Kerala: The facts'. Worried about the backlash of Kerala high court's (HC) order to ban endosulfan and the resulting publicity, the industry association decided to place an advertisement in a Kerala daily and 'educate' people about the intricacies of the order.

Earlier, the industry through its clandestine supporters in the scientific establishment and the central and state government machinery had been trying to scuttle the ban. All its efforts went in vain after the HC called for a ban as "precautionary and defensive measure during the period when the matter is pending consideration before the Central Government". In a desperate attempt to garner public support, the industry in the advertisement has suppressed certain important facts. It says that committees appointed by the state government "found no link between the use of endosulfan and alleged health problems". However, they conveniently forgot to mention the studies which say otherwise. Interestingly, from the language of the advertisement, it can be inferred that the pesticide industry is quite confident about the decision the multi-disciplinary committee of the Central government is expected to arrive at. The head of this committee is a known industry supporter. He had visited Kerala just a few days before this advertisement appeared. Locals from Kasaragod, where endosulfan was sprayed aerially and resulted in severe health problems, reported the haphazard way in which the investigation was carried out.
Features Water Supply Water Resources Water Conservation Urban Water Harvesting Roof Top Water Harvesting Hyderabad (T) Endosulfan Kerala India Pesticide Industry Pesticide Industry Pesticide Industry Kasargod Media
SUPPORT US