Nagpur ragpickers out, machines in 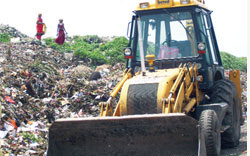 TWO months ago, a fleet of hydraulic trucks of a private company started collecting garbage from homes in many areas of Nagpur. The trucks transport the garbage directly to the landfill site managed by another private company. This privatization of garbage collection has alarmed some 5,000 ragpickers who earn their living by rummaging through the city's bins and dump yards. They are likely to lose income.

The new garbage management system, Bin Free City project, is meant to reduce the litter on the streets by doing away with municipal bins. Already, the number of bins has been reduced from 300 to 200. "The bins will be retained only in commercial areas once the project becomes fully operational over the next 18 months," said M R Ganvir, head of the municipal corporation's health department. According to rough estimates 400-700 ragpickers retrieve recyclable waste from the city's main dumpyard at Bhandewadi, another 4,000 people sift garbage in the bins, a few collect garbage door-to-door and 800 dealers buy recyclable waste from the ragpickers. Most are migrants and their income is Rs 2,000-Rs 6,000 a month. Privatization would mean they would be barred from entering the bins and the dump yard. Municipal commissioner Aseem Gupta said the ragpickers can be diverted to other sectors through requisite training. "It isn't good that they earn a living by picking up refuse."

But the ragpickers demand their share in the garbage business. Savita Marware who set up her own garbage dealing business after working as a ragpicker for 10 years said: "Garbage is most profitable today. Why should we be pushed out of it?"

A US-based non-profit Community Housing and Finance International recently helped 500 ragpickers get work at the city dump yard. But their jobs may not last long as the companies plan to use machines for all the tasks, from recycling to treatment.