Energy labelling is the latest buzz in 'save-power' plan 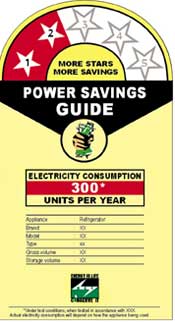 The Bureau of Energy Efficiency (bee) has introduced the 'National Energy Labelling Programme' for electrical home appliances, which means that consumers will now be able to choose them based on their performance. Under the programme, electrical appliances would be rated on a scale of one to five, with the most efficient product getting a 'five-star rating'. bee -labelled products will be in markets from July.

Labelling will be done on frost-free refrigerators and fluorescent tube-lights to start with. Other domestic products will be brought under the programme's ambit within a year. According to V S Verma, bee director-general, "Consumers will benefit by way of lower operating costs of the higher efficiency products".

Energy-efficiency labelling is an informational instrument that is widely used across the European Union to raise awareness of environmental issues, such as global warming. Experts feel that energy labels have an impact on consumer behaviour and an acceptance for clean technologies as well. There are both mandatory and voluntary forms of labelling. In India, manufacturers are expected to label products on a voluntary basis initially. It will be made mandatory within six months.

Energy labelling will provide consumers with a wider choice to choose the most efficient product and reduce the electricity bill at the same time. Lighting, fans, refrigerators account for most of the energy demand in India.

On an average, lighting and fans account for 62 per cent of the domestic power bill. Home appliances use up another 20-25 per cent and air conditioning consumes as high as 70 per cent of the power bill in summers. Water heating increases the bill by 30-40 per cent in winters.

While industrial motors consume almost 38 per cent of electricity, agriculture pumps use 23 per cent. Poor specification leads to consumption of more electricity and often results in making users pay 200 times the original price. The kind of labelling proposed for home-appliances sector should also be extended to industrial motors and agriculture pumps because the scope for energy saving is tremendous.

India's overall installed energy capacity is 125,000 mw. It faces a shortfall of about 11 per cent. Experts believe, through management alone, almost 40 per cent energy can be saved. One watt saved at the point of consumption is more than 1.5 watts generated. In terms of money, it costs about Rs 4 crore to create 1 mw of new generation capacity. But if the same Rs 4 crore is spent on energy conservation methods it can provide up to 3 mw of avoidable generation capacity.

Consumers, however, may have trouble interpreting messages on labels. "With the star rating criterion one cannot compare products with marginal energy-efficiency difference, even though in the long run it may have greater impact," said an official from Hitachi India. "We already have acs in the market with energy efficiency ratio specification and one can choose among the most efficient acs," he added. Moreover, several companies would prefer to label products voluntarily to gain an edge in the market.

India has definitely moved a step ahead towards energy conservation. But it will not be effective until minimum standards of energy efficiency are set because manufacturers always have the possibility to use it for their advantage. The purpose would then be lost.