'Beast from The East' – the science behind Europe's Siberian chill

Explaining how the wind chill came to Europe's doorstep 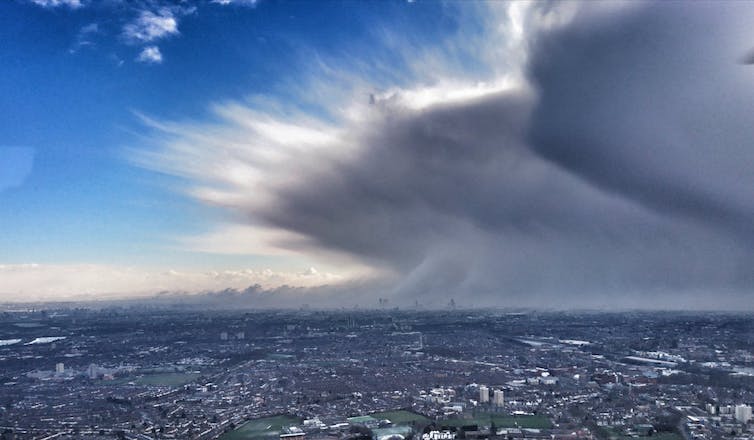 The so-called “Beast from the East” has arrived in the UK, bringing unusually cold weather – about 7°C colder than the historical average for this time of year. Wind chill is making temperatures feel particularly arctic. So how did the Siberian gusts come to arrive on Europe’s doorstep?

The movement of air across the globe, and the weather it brings with it, is governed by three major influences: gravity, the sun, and something called the Coriolis effect. The influence of gravity is simple, constantly pulling air towards the Earth’s surface.

The rise and fall of the sun dictates whether the air stays there. During the day, radiation from the sun heats the Earth, warming air directly above the surface and causing it to rise, leaving behind a region of low pressure (a low density of air particles). As the air rises, it cools and spreads outwards. This mass of air, now denser than the air below it, sinks back down under the force of gravity, and naturally flows back towards the lower pressure region of air, creating a cycle of air circulation. These circulating patterns of wind exist on an intercontinental scale, transporting heat all the way from the tropics to the poles.

However, thanks to the Coriolis effect – the deflection of objects moving in a straight path due to the Earth’s rotation – the winds do not travel directly north or south. To illustrate this effect, imagine a spinning top. Parts of the spinning top closer to the spindle rotate at slower speeds than parts further away, as they have less distance to travel to complete a full circle. Similarly, the equator has to travel much faster than the poles do as the Earth rotates. As air travels north from the equator, its extra momentum compared to the slower rotating land that it is moving over makes it curve across to the east, while air travelling to the south pole curves westward.

In the northern hemisphere, this interaction between the Coriolis effect and the circulation systems produces the northern polar jet stream: high altitude currents of air blowing eastwards at hundreds of miles per hour, moving weather systems around the globe. This causes the UK’s prevailing westerly and south-westerly winds, which usually draw weather systems in from the relatively warm Atlantic and shield us from colder air masses to the east.

The shape of the jet streams is not rigid – it follows a meandering path, much like a slithering snake. Occasionally, the jet stream path can become so twisted that it folds back upon itself, reversing the direction of the prevailing wind, and drawing in cold air from the east. A complex cascade of events associated with a phenomenon called Stratospheric Sudden Warming led to exactly this happening. In the last couple of days, the bitterly cold front combined with water vapour in the air to carpet the country in a blanket of brilliant white.

As the warmth of the sun disappears each night, the cold can feel all the more biting. But in the absence of the sun’s heat, the smaller difference in temperature between air near the ground and higher up makes air circulate more slowly. This often creates calmer conditions that might just provide a brief respite from the extra chill of the wind. For this same reason, air passengers generally experience smoother flying conditions when flying at night.

If you live in the city however, your experience of the “beast” can vary wildly from place to place. Cities continue to produce heat at night, generating their own microclimates. This man-made heat keeps air moving, and warms city dwellers up more than those in rural areas. At the same time, the ordered formation of buildings in cities creates strong wind corridors that are certainly best avoided at times like these.

Wherever you are experiencing this freezing weather, you can at least be thankful that you are here on Earth. Wind circulation patterns on other planets produce far more extreme weather than we will ever experience. Visitors to Venus, for example, would experience some serious turbulence when approaching landing, as the 500°C difference between surface and cloud generates extreme air circulation.

However, if you were lucky enough to touch down and survive the experience of the crushing pressure found on Venus’ surface, you would feel nothing more than a gentle breeze, thanks to the planet’s very slow rotation, weak Coriolis effect, and dense air. You might want to seek shelter though – at close to 460°C, suddenly a cold chill doesn’t seem so bad.