237 million people in 6 Asian countries at risk due to coastal flooding by 2050: Study

In India, six times more people are at risk from coastal flooding than the earlier estimates based on satellite data from NASA

Climate Central's map showing which areas of Asia could disappear under the sea, marked in red

237 million people in six Asian countries are at risk due to coastal flooding by 2050, a new study published in Nature Communications on October 29, 2019, has said.

The study is based on a new global coastal digital elevation model called ‘CoastalDEM’ prepared by non-profit ‘Climate Central’.

This is nearly four times more than the previous estimates of 54 million. The countries include China, India, Vietnam, Bangladesh, Indonesia and Thailand.

The study also notes that 300 million people would be under threat from coastal floods every year. That is nearly 73 per cent or three times more people being prone to risks than the earlier estimates of 79 million.

In India, six times more people are at risk from coastal flooding than the earlier estimates. Five million people in coastal regions were estimated to be under floods, but the new model projects 36 million people to be at risk. 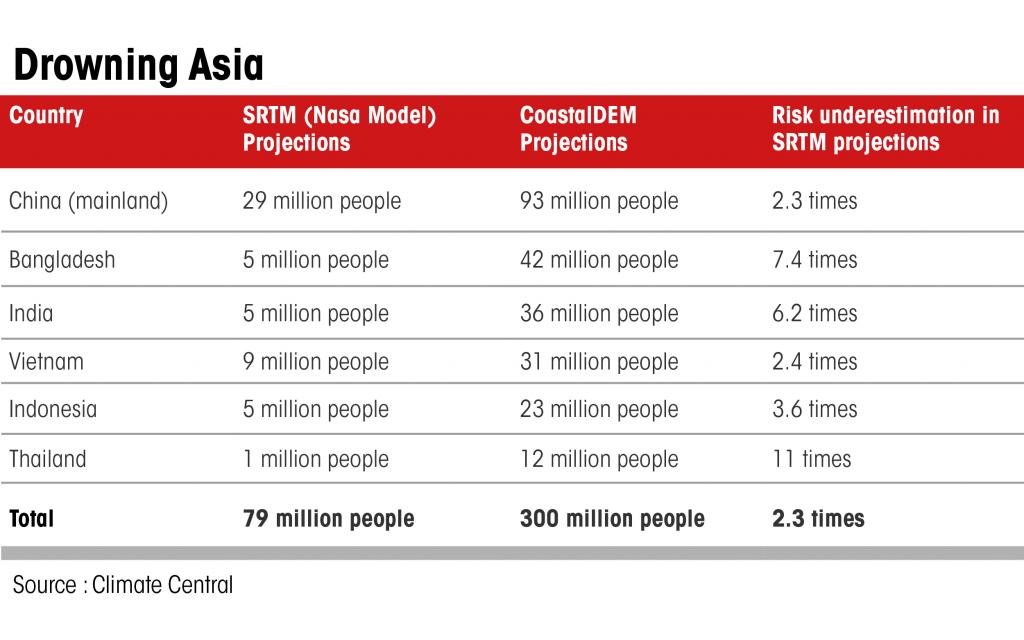 The earlier estimates were made based on satellite data provided by NASA’s Shuttle Radar Topography Mission (SRTM). Satellite datasets were unable to provide the correct picture since they reported the elevation of treetops and rooftops, rather than the ground itself.

The new model, CoastalDEM, considered other aspects along with the vegetation cover and included population density and land slope among others.

The new model is thus much more accurate on estimating sea level rise and analysing coastal floods across the world, the scientists who created the model, said.

However, there is a catch. The new model is based on Representative Concentration Pathway 4.5, which assumes that humanity will moderately reduce warming emissions roughly in line with the 2015 Paris Agreement. But it is now known that the world is far from meeting the Paris Agreement’s goals.

Thus, the scientists warn that their new model’s projections might also be an underestimate on the extent of populations exposed to future flooding.

The study calls for vulnerable nations, especially in Asia, to strengthen their ability to cope-up with coastal disasters. It suggests that constructing levees and other defences or relocating to higher ground could lessen these threats.

The study also calls upon the world to reduce carbon dioxide emissions.