Tremors felt in many places, including Jammu and Kashmir and Delhi-NCR 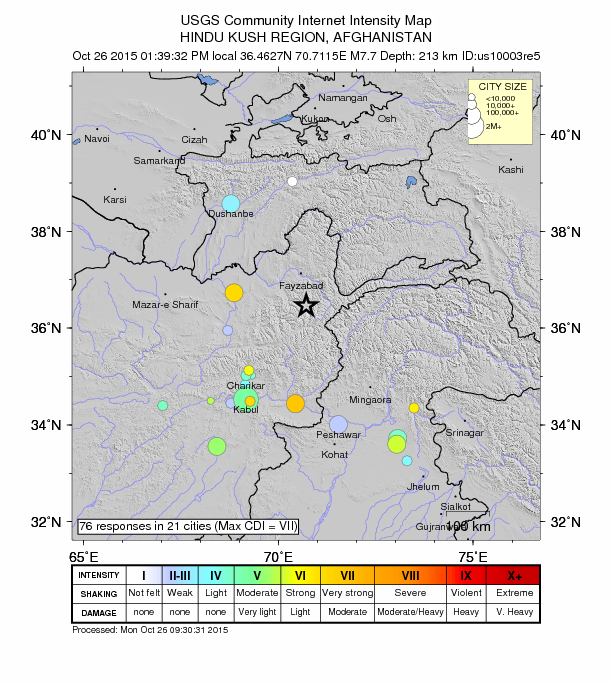 According to the US Geological Survey, the epicentre of the earthquake is in the Hindu Kush mountain region,73 km south of Fayzabad in Afghanistan and 256 km from capital Kabul. The earthquake was recorded at a depth of 213 km.

Strong tremors were reported from many parts of northern India. Tremors were felt in Srinagar, Delhi and the National Capital Region (NCR) and Chandigarh, among other places. According to media reports, at least 260 people have been killed in Afghanistan and Pakistan. Indian Prime Minister Narendra Modi tweeted that India was ready to provide assistance wherever required.

The Hindu Kush earthquake comes almost six months after the devastating 7.9 magnitude Nepal earthquake on April 25 earlier this year which led to more than 8,000 deaths.

The US Geological Survey states that numerous earthquakes occur in the Himalayas and their vicinity due to continental collision of the India and Eurasia plates, making "this area one of the most seismically hazardous regions on Earth".

C P Rajendran, professor at the Bengaluru-based Jawaharlal Nehru Centre for Advanced Scientific Research, says that recent earthquakes in the Himalayas show that seismic activity has picked up in the region.

"It is a rare earthquake in that it was very deep. 200 km is quite a distance. This is a different kind of tectonic activity as compared to the Nepal quake but it isn’t unexpected from the region," Rajendran says.

But scientist V K Gaur of the Council for Scientific and Industrial Research’s Fourth Paradigm Institute in Bengaluru explains the Hindu Kush has its own seismicity and cannot be linked to quakes in the Himalyan region at large. "It will not tell us why the Himlayan region is becoming more or less prone to earthquakes," he says.

Rajendran says it is worth monitoring whether activity picks up in the Himalayas and that more data must be collected before predicting future seismic activity.