It is the strongest storm to hit Japan this year 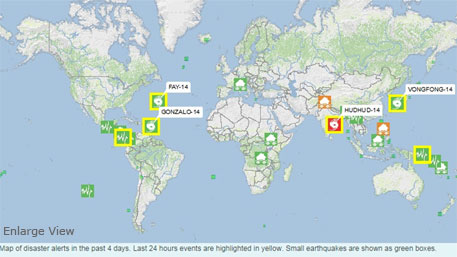 Typhoon Vongfong made its landfall on Japan’s main islands and injured at least 30 people in the island of Okinawa, say news reports. According to BBC News, this is the strongest storm to hit Japan this year.

It has also been reported that more than 300 flights were cancelled and hundreds of thousands had to be evacuated from their homes. Meteorologists say that Vongfong could pass over the capital, Tokyo, on Tuesday.

Vongfong, which means wasp in Cantonese, currently has winds of up to 120 km/h (75 mph), with gusts of 175km/hr, the Japan Meteorological Agency says. Areas of Japan have received massive amounts of rainfall in past months, and the slow, plodding nature of Vongfong could raise the risk of deadly landslides and flooding yet again, says Reuters.

What's in a name? That which we call a #Vongfong by any other word would SWELL as BEAST. pic.twitter.com/j1Hpl87BnK

Just a day earlier, on Sunday, powerful cyclone Hudhud made its landfall in the India coastal city of Visakhapatnam, causing extensive damage to property and claiming three lives. Authorities in the city had evacuated more than 300,000 people to safer places by Sunday morning. About 40,000 of them are in relief camps.