A drought of up-to-date data

A CLASSIFICATION of drought-affected areas was done in India in 1973-74 when the Drought Prone Areas Programme (DPAP) was launched. It has been used since then for carrying out drought-proofing measures. However, researchers from the Central Research Institute for Dryland Agriculture in Hyderabad contend that it is time to relook at the classification.

B Venkateswarlu, director of the institute and one of the researchers, says a new classification is necessary to ensure that funds are directed towards those areas which are most affected by droughts. Their study was published in the August 25 issue of Current Science.

As the nodal agency for the Indian Council of Agricultural Research’s adaptation and mitigation studies on climate change, the institute has been analysing the effects of global warming on districts in India. The researchers used recent data on rainfall and evapotranspiration from 144 stations located across India to compute the moisture index for figuring out different climatic zones in the country down to the district level. Such a classification could be a big help in formulating programmes for the 12th Five Year Plan (2012-17), which says that developmental schemes should be implemented using district-level plans and must meet the need of each district.

When the researchers compared their results with a similar classification done in 1988, they found that arid regions had substantially increased in Gujarat and decreased in Haryana. The study also found that some dry sub-humid regions in Madhya Pradesh, Tamil Nadu and Uttar Pradesh had now become semi-arid. The most important shift observed was inÃ”Ã‡ÃªChhattisgarh, Orissa, Jharkhand and Madhya Pradesh where 12, 7, 4 and 5 districts, respectively, shifted from moist sub-humid and humid to dry sub-humid category (see map). 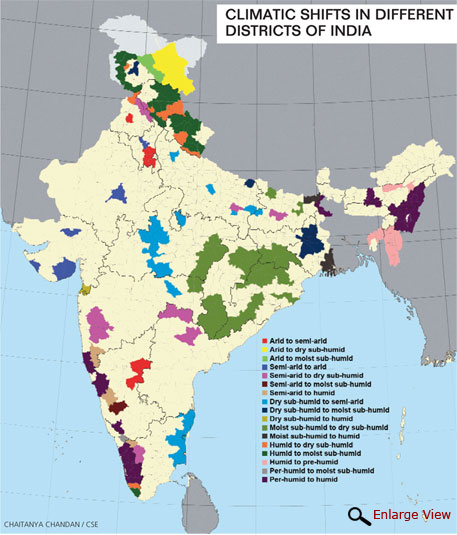 Overall, around 27 per cent of the geographical area of the country has seen a climatic shift since the study conducted in 1988. The shift from moist sub-humid to dry sub-humid was the largest and made up 7.23 per cent of the country’s area. Venkateswarlu points out that due to this shift, some new areas have emerged which are in dire need of assistance and should be given priority. “The eastern states which have become dry are also poverty-stricken. We need to focus on them,” he says.

“This study necessitates reorientation of agricultural planning in different states of India,” says A S R A S Sastri, professor at the department of agrometeorology, Indira Gandhi Agricultural University, Raipur, Chhattisgarh. Sastri too worked on climate change in different districts of Chhattisgarh. “We found that while earlier the climate type of Chhattisgarh was moist sub-humid, due to global warming, it has changed to dry sub-humid. In eight districts, the climate had changed to semi-arid and our projections indicateÃ”Ã‡Ãªthat in seven more districts it would change to semi-arid in the coming 10-15 years. In other words, desertification process has started in these districts,” says Sastri.

The researchers say that climatic classification should be revisited at least once every 30 years.