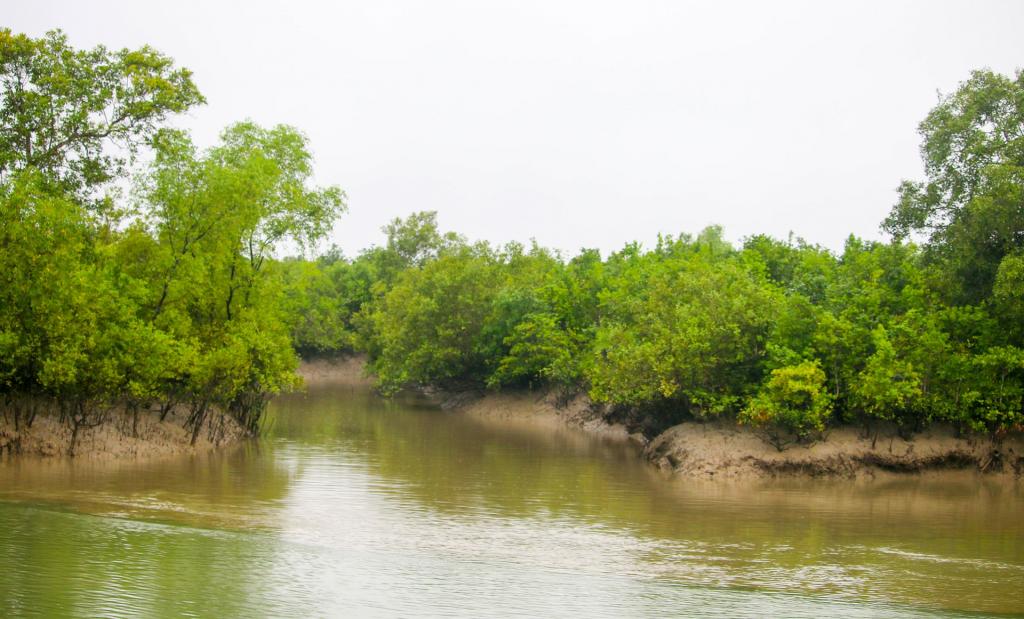 Cyclone Amphan may bring sea water around 25 kilometres inland because of a storm surge of four to six metres. The storm surge will cause large scale inundation and saline water ingress in the coastal areas of West Bengal and Bangladesh, according to the India Meteorological Department.

A storm surge is a rise in sea level that occurs during tropical cyclones. The surge will cause large-scale flooding and bring saline water in agricultural fields and people’s homes, leading to long-term damage, including a decrease in soil quality.

The inundation will occur along small rivers that feed into the Sundarbans delta.

Water ingress is a major issue in the Sundarbans even in normal tidal situations, said IMD Director-General Mrutyunjay Mohapatra, in a live question and answer session on social media site Facebook May 18, 2020.

“The problem is aggravated because of the shallow nature of the West Bengal and Bangladesh coasts, especially in the delta region of the Sunderbans,” he said. “With a storm surge of this magnitude, the situation will be devastating,” he added.

Rising sea levels due to anthropogenic global warming have already resulted in the migration of 1.5 million of the Sundarbans' residents.

The Bay of Bengal is currently rising twice as quickly as the average of other seas around the world. Intense cyclones like Amphan and Bulbul — that struck the region in November 2019 — add immediate intensity to a long and slow problem for the region.

In May last year  — during the landfall of cyclone Fani in Odisha’s Puri district — a strong storm surge opened up four new mouths in the brackish Chilika lake. This caused sea water to enter the lake for several months, disturbing its delicate salinity gradient.

Fisherfolk around Chilika — who also depend on the lake for their livelihood — reported a drop in catching fish until at least February 2020.

Amphan will bring other hazards to life and property in the region, both in the short and long terms. Initial damage will be done by the cyclone’s strong winds that will be as high as 165-175 km / hr, with gusts of up to 185 km / hr, according to Mohapatra.

This will cause property damage, including uprooting trees, electric poles, damaging houses, roads and other infrastructure. The region will also witness heavy to extremely heavy rain that may cause flash floods, landslides and inundation.

Amphan will maintain at least cyclone intensity (wind speeds of up to 70 km / hr) for up to 18 hours after making landfall, according to IMD’s latest prediction. This means several impacts of the cyclone will be felt much further inland from the West Bengal coast, a situation that occurred in the case of cyclone Fani in May last year.

The cyclone will make landfall between Digha in West Bengal and the Hatiya island in Bangladesh around late afternoon on May 20. It will decrease in intensity from a super cyclone to an extremely severe cyclone before making landfall, but will remain a major threat.

Odisha’s north coastal districts — Jagatsinghpur, Kendrapara, Bhadrak and Balasore — will also suffer impacts from the cyclone, with wind speeds of 110-120 km / hr and gusts of up to 135 km / hr.