Another year, another mismanaged flood response in Assam

As floods ravage Assam and other north-eastern states in India, failed promises by politicians to deal with floods come under close scrutiny 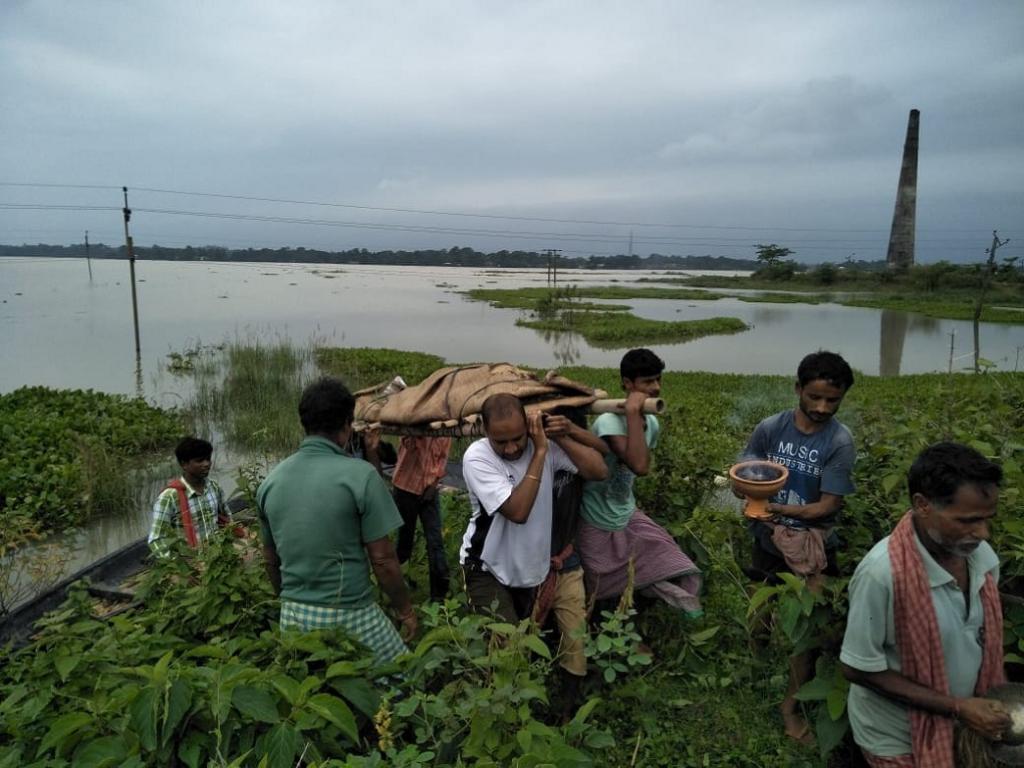 Locals carrying a body of a flood victim in a funeral. Credit: Madhav Bhattacharya

Kamalakhya Dey Purkaystha, the Member of Legislative Assembly from Karimganj, Assam, led the boat that carried the bodies of Mishu Malakar and Kulendra Malakar from Sharifnagar in Karimganj who were killed in the ongoing floods. Their bodies were cremated on the Karimganj-Tripura National Highway 8 where thousands of flood victims were taking shelter. At least 18 people have been killed in the first wave of flooding that hit the Barak and Brahmaputra Valley this year.

The Brahmaputra and Barak river systems account for one-third of India’s run-off, and are highly prone to floods. The Indian state of Assam receives both the monsoon rains, and water from perennial rivers originating from the Himalayas. Since the glacial melt coincides with the summer monsoon season, any intensification of the monsoon is likely to contribute to floods downstream. Coupled with floods, erosion by rivers causes loss of nearly 8,000 hectares (80 square kilometres) of land in the state every year.

The Barak and Kushiara rivers were flowing above danger level with incessant rains since June 12. The first surge of waters inundated vast areas of Karimganj, Hailakandi and Cachar in the Barak Valley. The southern district of Hailakandi seems to be the worst affected in this first surge of flood with over 200,000 people severely affected.

The first flood-related death was reported from Golaghat district. Sunil Mura was swept away by a flash flood in the Difoloo and his body was recovered the next day. In the Dima Hasao district that has been hit by flash floods, eight people and five trucks were washed away in the Mahur river. While six of the people were later rescued by a State Disaster Response Force (SDRF) team, the body of truck driver Thoubal Singh was recovered two days later.

In the Brahmaputra Valley, the Kapili river wreaked havoc in the hill districts of West Cachar and Karbi Anglong while flooding in the Nishari river affected Nagaon district. Over 40% of the Dibru Saikhowa National Park and Biosphere Reserve was submerged under the flood waters of the Dibru river.

The first bout of floods hit the Barak valley hardest. Humans and livestock were washed away and thousands were people displaced. Currently, 716 villages are under water and 3,292 hectares (32.92 square kilometres) of crop area have been damaged, the Assam State Disaster Management Authority (ASDMA) said. More than a week of heavy rains in Assam has caused the Barak and the Brahmaputra to exceed danger levels. Smaller rivers have also burst their banks. Road and rail communication remained disrupted due to flood and landslides between the Brahmaputra and the Barak valleys for days.

The ASDMA said in an official flood bulletin on June 16 said that the number of flood-hit people in the state has risen to 425,373 in 716 villages; 235 relief camps were opened where 173,245 displaced people have taken shelter, the bulletin added. Around 1,500 villages in 10 districts were severely affected by this first wave of floods. Personnel of the National Disaster Response Force (NDRF) and the State Disaster Response Force (SDRF) rescued 422 marooned people from flood-hit areas. Camps of the Border Security Force were inundated by flood waters, and shifted to nearby schools on the India-Bangladesh border at Laksmi Bazar area in Karimganj.

Other states have not been spared either. At least 21 people have died in flash floods and landslides in Manipur and Tripura. The states face severe infrastructural problems with bridges and roads washed away. Two national highways which link Manipur to Assam and Myanmar have caved in along the mountain slopes, blocking heavy vehicular traffic for the past three days.

More than 180,000 people have been affected by the floods in Manipur. Although, the intensity of rainfall decreased in Imphal, the situation was yet to improve in the valley districts of Thoubal, Imphal West and Bishnupur, a report issued by the Relief and Disaster Management Department said. The number of damaged houses across the state has increased to 22,624, necessitating the setting up of 48 new relief camps. Meanwhile fresh areas at Mayang Imphal, Uchiwa and other villages have been inundated by the flood waters. 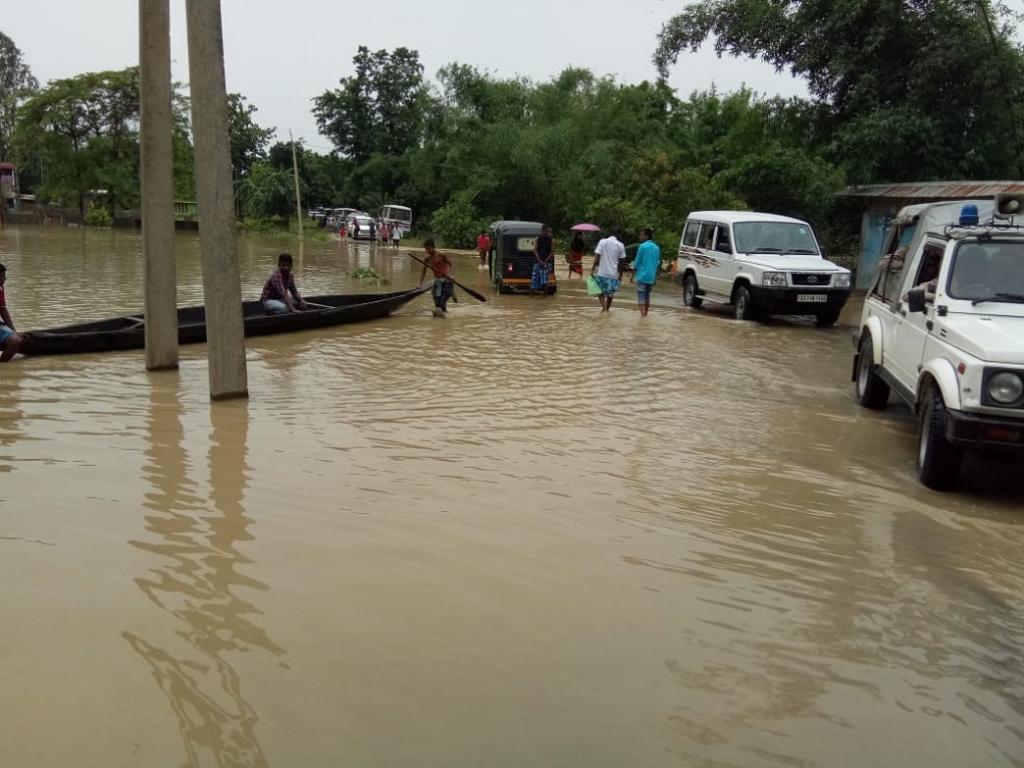 The flood situation improved slightly in Tripura even as over 40,000 people continue to remain stranded in 189 relief camps across the state. The situation also improved in Mizoram with the water level of river Tlawng and Langkaih receding but 500 families were displaced and a number of houses were still under water, said officials in the Disaster Management and Rehabilitation Department. Fresh landslides in Dharmanagar area of Tripura have also cut off the state from the rest of the country. The railway and highway to the landlocked state pass through this area. Some 200 workers of the National Disaster Response Force have been flown into the state for rescue operations in Unakoti, South Triprua and West Tripura districts, where more than one million people have been affected.

The north-eastern states of India have experienced the impact of climate change in excessive rainfall and flash floods. Subtle changes have already been noted in the monsoon rain patterns by the scientists at IIT Delhi and IIT Guwahati. Scientists from the two institutes further warned that rising temperatures will lead to the raising of the snowline, decreasing the capacity of natural reservoirs, and thus increasing the risk of flash floods during the monsoon season.

Last year the Union Minister of State for Home Affairs, Kiren Rijiju, told the Rajya Sabha (the upper house of the Indian Parliament) on August 10 that the national government had earmarked INR 1 billion (USD 14.67 million) to find a permanent solution to floods in the north-eastern region. The Chief Minister of Assam, Sarbananda Sonowal, had told a visiting groups of ministers led by Joint Secretary of the Home Ministry, V Shashank Shekhar, that the state had a proposal to develop embankments as road-cum-embankments stretching to a length of 5,000 kilometres under the ‘Prime Minister’s Special Programme for Flood and Erosion Control’. Most of the embankments along the Brahmaputra and its tributaries in Assam have outlived their lifespan and the need for their major overhaul is pressing, but only minor repairs have been carried out over the years. This year repairs to most of the embankments could not be completed.

The Assam Government also planned departmental reforms in face of last year’s floods that included dredging a few tributaries of the Brahmaputra on an experimental basis as the water-carrying capacity of the rivers is diminishing every year. The Water Resources Minister of Assam had also spoken of a state-of-the-art flood-monitoring and flood warning system for effective flood forewarning.

However, all these promise turned out to be empty rhetoric. Without effective solutions or policies, things remain unchanged.

At the fourth meeting of the Governing Council of NITI Aayog – the Central government’s think tank – the Chief Minister of Assam has urged the central government to come to Assam’s rescue. The Prime Minister has assured that all help will be extended. Last year, during the review of the flood situation with the Chief Ministers of Assam, Manipur, Nagaland and Arunachal Pradesh, the Prime Minister had announced the constitution of a high-level committee for holistic management of water resources. It was also decided to set up a Northeast Water Management Authority where all the north-eastern states would be stakeholders. The meeting noted that the optimum management of water resources is a cross-cutting task which requires multi-sectoral interventions and concerted strategy, including management of catchment areas in upper reaches involving concerned central ministries and state governments.

The government constituted the committee, headed by the Vice-Chairman of NITI Aayog, but nothing more has come of it yet. The report of the committee, including an action plan, is due to be submitted this month.

Mubina Akhtar is a freelance journalist based in Assam