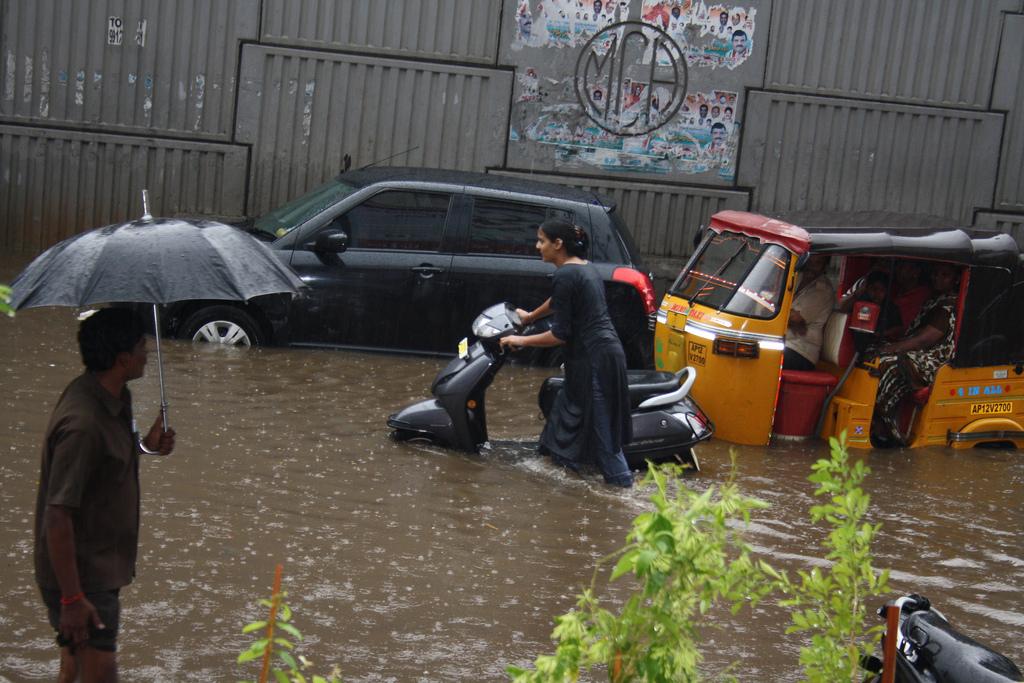 At least 10 people have died in Andhra Pradesh and Telangana as heavy rains continue to lash in both the states. While at least six persons have so far died in Guntur district (Andhra Pradesh) alone, Medak district (Telangana) has recorded four deaths in the last 12 hours.  Unprecedented rain has forced at least 7,000 people out of their homes and cut off the rail link between Secunderabad and Guntur for over 30 hours.

This torrential downpour can be attributed to a low pressure area over Bay of Bengal that persists over coastal Andhra Pradesh and adjoining areas. The state is likely to witness heavy to very heavy showers for another 48 hours, following which this weather system is likely to move towards Telangana. This will further increase the rain intensity.

Chief Minister K Chandrasekhar Rao has said that the army could be called in to help the National Disaster Response Force (NDRF) and Rapid Action Force who have already been pressed into action.

Vehicular movement between Guntur and Hyderabad was interrupted due to flooding. In fact, train services between Macherla and Guntur were also cancelled after a 500-m-long portion of the railway tracks was washed away in the flood. Cotton fields near Parchur in Prakasam district were flooded.

Hyderabad and other parts of Telangana

On Thursday, eight areas in Hyderabad recorded over 20 mm rainfall in just 60 minutes. Within a span of 21 hours from 8:30 am on Thursday, the capital city recorded 59 mm of rain. It started pouring at around 10 pm on Tuesday and picked up pace during midnight. Since then, rains in varied intensity lashed over Hyderabad and other districts of Telangana.

A high alert has been sounded in Hyderabad after more rain was predicted in the next few days. Submerged streets, overflowing lakes and ponds brought back the memories of Chennai floods of November 2015.

The water level in Hussain Sagar Lake is reaching full level, with water being let out through a surplus drain. The Guntur-Hyderabad highway has also been cut off after the flash floods.  While the government has declared a two-day holiday for educational institutions in Hyderabad, the IT companies were urged to announce holiday or allow employees the option of working from home.

Cities of Telangana on high alert against the flood like situation

Apart from clearing water logging near the Raj Bhavan, the workers of the Greater Hyderabad Municipal Corporation were pressed into service in the affected areas of Kukatpally and Moosapet to clear the road of sand and other debris.