Bulbul kills in Bengal before moving onto Bangladesh

Cyclone Bulbul moved into Bangladesh over the night and of November 9-10 after disrupting life in West Bengal and Odisha. It was likely to weaken into a depression. Three persons were reportedly killed while many lost property.

In the Sunderban delta region of Bengal's South 24 Parganas district, several left their homes for higher ground, some taking shelter in schools and other community areas like flood centres. Moving people to safety became more difficult as power supply was switched off. Some embankments gave way, inundating low-lying areas. 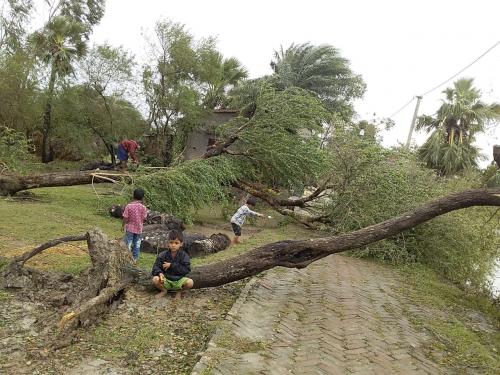 Trees were uprooted in several places, many mud houses were weakened by the rain, standing crop was damaged as were vines of betel leaves.

Earlier in the evening, 381 fishermen in 43 boats took shelter at Dhamra and Talchua in Odisha's Bhadrak district while heavy rains lashed at 10 coastal and northern districts of the state: Kendrapara, Bhadrak, Jagatsinghpur, Balasore, Jajpur, Puri, Cuttack, Mayurbhanj, Khurda, and Keonjhar. According to rainfall data received from Odisha's special relief commissioner’s office, Rajnagar and Rajkanika blocks in Kendrapara district recorded a rainfall of 180 mm and 136 mm. Chandbali block in Bhadrak had a rainfall of 150.1 mm while Tirtol block in Jagatsinghpur recorded 100 mm.

“A total of 3,682 persons in the four districts were evacuated from vulnerable places and kept in 46 cyclone shelters. They were given dry and cooked food, and drinking water,” said Special Relief Commissioner Pradeep Kumar Jena.

Besides, The rain and wind have caused damaged to paddy and non-paddy crops in the districts. According to primary estimates, 35 per cent to 40 per cent crop loss has occurred in around 6 hectares of land. Many trees were uprooted and communications disrupted due to the impact of the rain. Besides, there have been reports about damage caused to electric poles in several places.

Teams of Odisha Disaster Rapid Action Force and National Disaster Response Force and fire brigades have been engaged in clearing the fallen trees.