Centre announces Rs 940 crore, but Tamil Nadu yet to learn from disasters

As floods in Tamil Nadu cause a financial dent and Chennai is declared a disaster zone, a look at the rescue efforts and what’s missing in the disaster management in Tamil Nadu 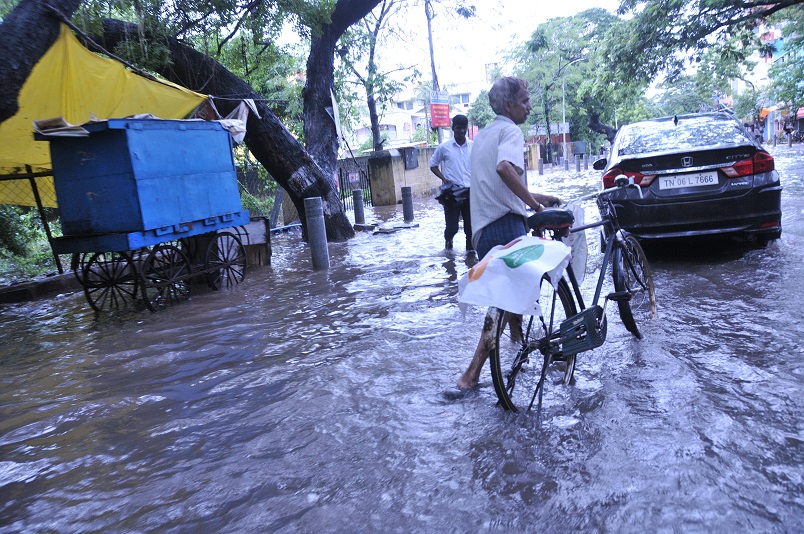 With 269 deaths and half the coastal districts including major areas of state capital Chennai under water, Central and state authorities were inundated with rescue and relief work. As arterial roads, railways and even air services shut down after the second wave of the northeast monsoon hit Tamil Nadu, disaster response force teams had evacuated about 5000 persons.

On Thursday, Union Home Minister Rajnath Singh announced relief worth Rs 940.92 crore in the Lok Sabha, even as Tamil Nadu Chief Minister J Jayalalithaa had written to the prime minister seeking Rs 8,480.92 crore from the National Disaster Response Fund (NDRF). According to the Chennai chapter of Associated Chambers of Commerce of India (ASSOCHAM), the state has suffered a loss of Rs 15,000 crore.

According to NDRF Chief O P Singh, the number of rescuers in Chennai and the adjoining areas has been doubled to 1,200. Prime Minister Narendra Modi conducted an aerial survey of the flooded areas of the state. In a meeting held on Thursday morning in New Delhi with officials of ministries of home, defence, food, railways, agriculture, health, department of telecommunication, National Disaster Management Authority (NDMA), India Meteorological Department (IMD) and National Disaster Response Force (NDRF), it was decided to move two additional columns of the Indian Army to the affected areas while Central agencies would continuously coordinate with their Tamil Nadu counterparts. (One column of the army comprises around 75 personnel.)

"We have 30 teams, each having 40 members, working in these areas now and we plan to concentrate in the areas of south Chennai which are the worst affected. The meeting took stock of the preparedness of various agencies," Singh said after the meeting. He said the force has deployed about 110 inflatable and other kinds of boats and separate assortment of buoys and life jackets with the rescue and relief teams so that the needy can get help. The force has also deployed two teams, out of the 30, in Puducherry while another set of NDRF teams are on standby at Patna and Pune which can be airlifted at short notice, he said.

It was only on Wednesday, two weeks since disaster had struck, that Chennai was declared a disaster zone. According to the State Revenue Department, as many as 35 lakes in the state are flowing above the red mark, raising fears of more flooding. Since Wednesday evening, several parts in the state reported power outages that continued till Thursday evening. Telecommunication facilities across the state were also badly hit as many living in other metros could not reach out to their relatives.

The situation in Kancheepuram, Thiruvallur, Cuddalore and in southern parts of Seemandhra such as Nellore and Chittoor are yet to ascertained. According to Puducherry District Collector D Manikandan, 400 houses have been damaged in the Union Territory alone.

Is Tamil Nadu prepared for disasters?

With Met officials warning of more rainfalls, questions have been raised about the disaster preparedness of the state. According to Delhi-based advocate Gaurav Kumar Bansal, who moved a petition against Government of India on the implementation of disaster management act passed in 2005, Tamil Nadu and six other states did not have any disaster management plan in place till 2013.

In the aftermath of the Uttarakhand disaster of 2013, a bench headed by Justice A K Patnaik sought response from the Centre, six states and the Union Territory of Andaman and Nicobar Islands on disaster preparedness. "However, responses from Tamil Nadu government showed that most of the plans were only on paper. For instance, the state advisory board, which is supposed to meet periodically to review disaster preparedness, has not met even once. This is not only restricted to Tamil Nadu but even the Delhi government till recently did not have disaster management plan in place," added Bansal. The case is coming up for hearing in January 2016.

With the coastal state witnessing a massive tsunami in 2004 and recurring floods during the retreating monsoon since 1977 and earlier, the disaster management plans should have been in place. However, apart from a US $337.20-million World Bank project which is progressing at a snail’s pace, only to be completed in 2018, the state government has not made much progress in taking measures to protect the state from vulnerabilities. A review of the World Bank project in Puducherry and Tamil Nadu meant to deal with multi-hazards shows that only 5 per cent of the institutional capacity for risk reduction could be achieved in March 2015. According to former Member of Parliament M Ramadass from Puducherry, the Ministry of Home Affairs which oversees the needs of the Union Territory should immediately take steps to constitute a Union Territory Disaster Response Fund (UTDRF) to help the local government dispense flood relief to rain-affected people.

It was only in May 2015, following the deadly earthquakes in Nepal, that the Municipal Corporation of Chennai started the process of preparation of comprehensive disaster management plan for the city which includes pre-defined roles for the officials while facing a disaster. According to N Madhavan, a disaster management expert who worked on the resilience index for the city, ward-level vulnerability mapping was done after the tsunami in 2004. "However, efforts went to waste as boundaries of wards and zones changed following expansion of the city," said Madhavan, who worked with the Municipal Corporation of Chennai. Bansal said that disaster response of the government as a whole is in shambles. "For every kind of disaster relief, Indian armed forces have to be called into action. At Central level, the decision-making rests with retired bureaucrats who have no experience of working on the ground. Not just Tamil Nadu but every other state is in danger," he added.