Just weeks ago, Chennai was staring at the possibility of a severe water shortage as storage in reservoirs stood at an abysmal 90 per cent deficit 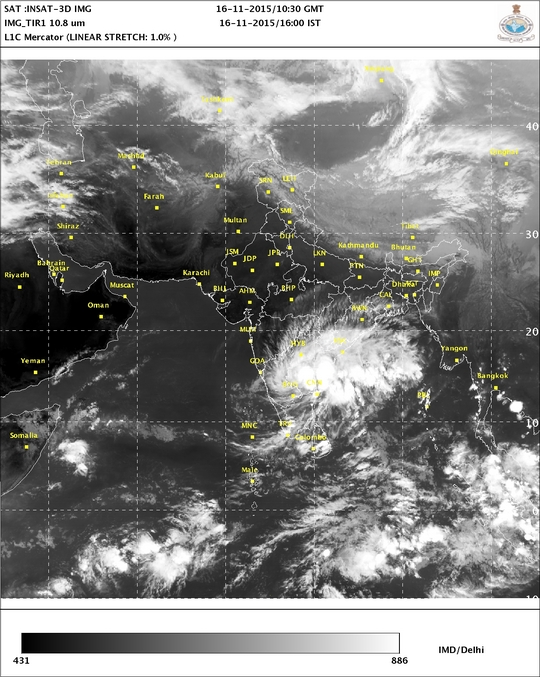 A well-marked depression over southwest Bay of Bengal has been moving west-northwest towards Tamil Nadu and India's southeastern coast, causing heavy rains, severe flooding and water-logging in several areas including Chennai city. According to a bulletin issued by the India Meteorological Department (IMD), rains are set to continue for another day after which they will abate to some extent. But isolated thundershowers may be experienced until November 21.

Just weeks ago, Chennai was staring at the possibility of a severe water shortage as storage in reservoirs stood at an abysmal 90 per cent deficit. But two low pressure formations and heavy rains have changed the scenario considerably within a week as storage (5,088 mcft) in four reservoirs around Chennai stood at 46 per cent of the total capacity (11,088 mcft). During the same time last year, storage stood at over 40 per cent lower at 2,940 mcft.

Heavy rainfall may have brought good news for water security in Tamil Nadu, and Chennai in particular, but it has also exposed the state’s under-preparedness. Large parts of Tamil Nadu were flooded over the past week following the heavy rains. Chennai had received 265.5 mm of rainfall until 8.30 am on November 16. The city reported several instances of flooding and water-logging.

"Even though my my office is just 2 km away, there is no way I can reach. It looks like I will have to go back home today," said D Shankar, a commuter, on Monday morning. Schools and colleges in districts of Chennai, Kancheepuram and Tiruvallur have been declared shut as another day of incessant rains is expected.

People can be seen wading through knee-deep or even waist-high water. Potholed roads have become a common sight. "The situation is very bad, there are several vehicles that are breaking down and so we have to be very careful about the routes that we take and the fares that we accept," says S Ramesh, a Chennai autorickshaw driver.

City officials have been deployed in several areas to pump out the accumulated water. "We are trying to bring the situation back under control but water levels in several areas are so high that it might take some time and a lot of manpower," said a city official who declined to be named.

Several inter-state trains have been redirected due to flooding on the railway tracks. Suburban trains have also been affected and are running slow.

The death toll has also been mounting with 55 people reported to have lost their lives due to the rains. Four people died due to rain-related incidents on November 13 and 14 in Kancheepuram and Vellore districts. Chief Minister Jayalalithaa is reported to have been taking stock of the situation. A compensation of Rs 4 lakh has been announced for the families of each of the deceased from the Disaster Relief Fund.