Flood waters brought about by rains due to Cyclone Yaas breached embankments across region; residents used their bodies to plug embankment breaches 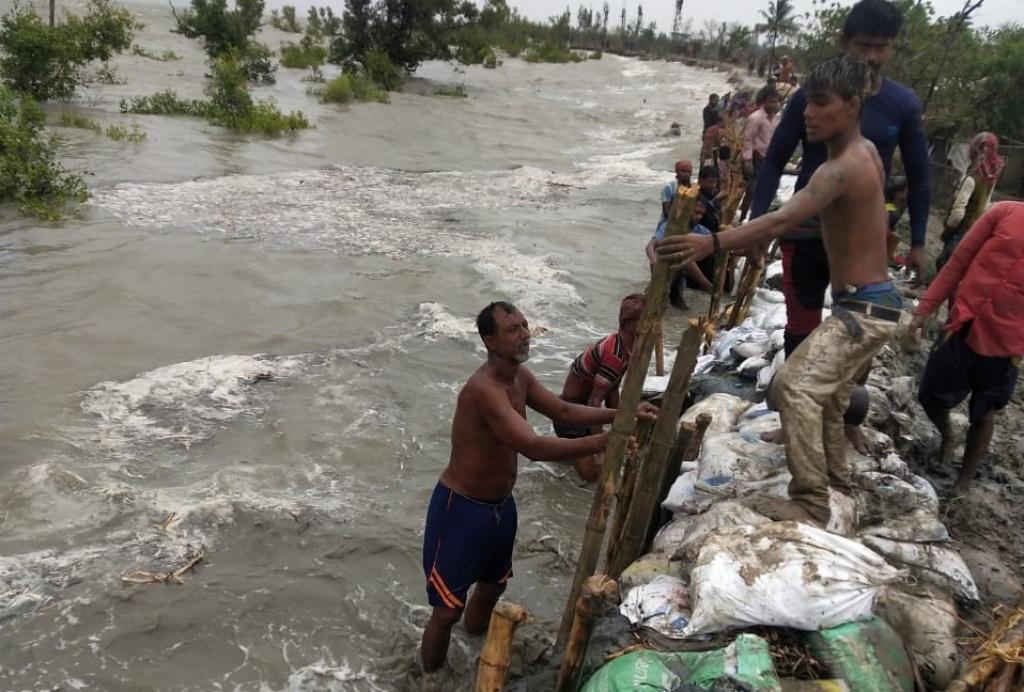 The inhabitants of West Bengal’s Sundarbans region may have been saved from Cyclone Yaas due to timely evacuation. However, their livelihoods have been lost due to embankments in the region being breached.

People in at least one area of the world’s largest delta shared by India and Bangladesh used their own bodies to plug the breach in an embankment. However, with most of the region underwater currently, it will take a lot of time for shattered livelihoods to be revived.

The ‘human wall’ was made by people in the G Plot of Pathar Pratima block in the Sundarbans. As Yaas subsided May 26, 2021, residents noticed the embankment on the Jagaddal river adjoining Sitarampur village beginning to wobble.

The embankment adjoins agricultural land as well as residential plots. People quickly ran and tried to stop the water with whatever they could find, be it hay, plastic or tarpaulin. They even used their bodies to form a human chain. Others dug earth to plug the embankment.

However the embankment gave away during the next high tide.

“I am now in the G Plot area and can’t distinguish where the river ends and where land starts … It seems that rivers have completely swallowed Pathar Pratima. Many areas of Pathar Pratima are under water,” Samir Jana, member of the legislative assembly from Pathar Pratima told this reporter May 27.

A similar fate befell Mousuni island, squeezed between Sagar island and Bakkhali and part of the Namkhana block. Residents could do little as the island, like G Plot, is surrounded by rivers and the Bay of Bengal.

“The whole of Mousuni is under water and even the pucca houses have chest-high water on their ground floors. The mud houses are not there anymore,” Adalat Khan, a resident of Mousuni, told this reporter over the phone May 27.

Both, Pathar Pratima and Mousuni remain flooded even 30 hours after Yaas’ landfall.

Chief Minister Mamata Banerjee, who has been monitoring Yaas since May 25 from the state secretariat Nabanna, said May 26:

The cyclone has impacted nearly 10 million people. Though it will take 72 hours to make a detailed damage assessment, our preliminary findings suggest that about 300,000 houses got damaged. Some 134 river embankments have been breached.

Banerjee is scheduled to make helicopter trips to ascertain the damage first-hand in most impacted areas. She will also hold review meetings in the districts of Purba Medinipur and South 24 Paraganas.

Banerjee admitted that agriculture and fisheries would be the most impacted as saline water had entered inland areas due to storm surges and encroached on agricultural land.

Yaas, a very severe cyclone, did not hit West Bengal directly but its coastal areas experienced squalls in the range of 100 km or more, apart from large-scale flooding.

This happened primarily because the storm’s landfall overlapped with high tide. But so far, only one person has reportedly died as a consequence of the cyclone.

According to state government sources, nearly 1.5 million people were evacuated before and during the disaster into 14,000 flood shelters, both formal and temporary ones.

The evacuation of about 500,000 people during Cyclone Amphan was the record in West Bengal before Yaas. Around 0.7 million people each were evacuated during cyclones Phani and Hudhud, which mainly affected Odisha.

“We planned carefully after Amphan. We enhanced our capacity, procured machinery and above all, the coordination has been very good under the leadership of the chief minister. That did the trick,” state disaster management minister Javed Ahmed Khan claimed.

Experts are also attributing the success to the state government’s preparations. “This effort of the state government, with the chief minister leading from the front, particularly evacuating such a record number of people smoothly and that too during this pandemic period, is definitely praiseworthy,” Nasir Ateeq, a disaster management expert attached with an international organisation, told this reporter May 27.

Locals in the Sundarbans however pointed out that a heightened level of awareness among people, especially after Amphan, did the trick.

“People, who earlier refused to go to the flood shelters, complied with government directives this time, which minimised casualties,” a non-profit worker from Sagar island, said.

Yaas has also caused a thaw in the continuing face-off between the West Bengal government under Mamata Banerjee and the Union government as well as the state governor and the state Bharatiya Janata Party (BJP) leadership.

The two sides had been on daggers drawn since Banerjee won the bitterly-contested state election less than a month back.

Banerjee had earlier criticised the Centre for not providing enough support to the state after Amphan. But her tone this time was reconciliatory and cooperative.