Sylhet’s traditional wetlands, which act as sponges absorbing surface runoff, have been destroyed, thereby enabling the current floods, they say 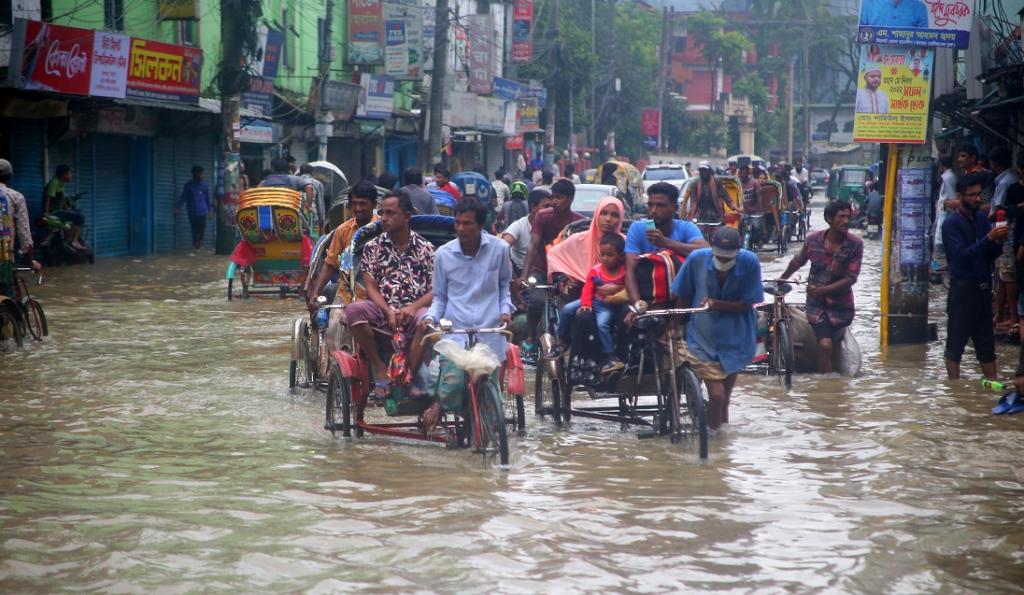 Experts in Bangladesh have cautioned against solely blaming climate change for the ongoing floods in the country’s north-eastern Sylhet division. They say the destruction of Sylhet’s traditional wetlands, known as ‘haors’ are also part of the reason.

The whole of Sylhet division has been flooded since June 16 and 17, when rains upstream in India’s Meghalaya and Assam caused rivers flowing from there to Sylhet to swell and burst their banks.

“About 80 per cent of Sylhet is under water. Schools are closed indefinitely and thousands of people have been forced to flee their homes in search of dry land,” Wendy McCance, country director for the Norwegian Refugee Council (NRC) in Bangladesh, said.

“We urgently need funding to respond to this crisis, so we can work with local partners and authorities to provide immediate life-saving assistance,” she added.

Experts highlighted how the excess water moving from upstream towards Sylhet had deluged Bangladesh’s fourth-largest city and its vicinity because of the encroachment and destruction of haors.

A haor is a bowl or saucer-shaped shallow depression. During the monsoon, haors receive surface runoff from rivers and canals to become vast stretches of water.

It is similar to other types of wetlands found in West Bengal and Assam such as the jheel or beel. The essential purpose of such wetlands is to act as sponges, absorbing excess rainwater.

“Excess rainwater cannot move. Various types of infrastructure has been constructed on Sylhet’s haors. This is obstructing the flow of water. That is why the floods in Sylhet division have been so intense,” Saiful Islam, a professor at the Institute of Flood and Water Management, Bangladesh University of Engineering and Technology (BUET), said.

M Zakir Hossain Khan, a climate and sustainable finance analyst and executive director of the research organisation, Change Initiative, also emphasised on the role of haor destruction in the deluge.

“There are human-made causes of the floods in Sylhet. The haors have been ruined without conducting any kind of environmental impact survey. Various structures have been built on the haors. Necessary dredging has not been done in Sylhet’s rivers. As a result, the rivers are full of silt,” he said.

Experts have urged protection of Sylhet’s haors and the dredging of its rivers to prevent similar deluges in the future.

Mushtaq Ahmed, a professor in the department of urban and environmental engineering at the Shahjalal University of Science and Technology in Sylhet, said long-term planning was needed to protect Sylhet from floods.

The length, width and depth of the rivers of Sylhet should be increased by dredging them scientifically. Indiscriminate destruction of hills and filling of ponds should be stopped in Sylhet.

Khan said, “Flood control structures cannot be set up for Sylhet and its haors. There has to be flood management. The big problem in the area is that after the construction of infrastructure, the repair and maintenance work is done very poorly.”

The destruction of wetlands is of course an important reason. However, what should also not be overlooked is that low-lying Bangladesh is particularly susceptible to climate change, experts said.

In 2019, Sunamganj and Sylhet cities were flooded. The flood waters had receded in two or three days, though. But most of the area of the​ Sylhet division has never been flooded before.

“The main reason behind this sudden flood is the heavy rainfall in Cherrapunji and Maysynram in India. However, due to the increase in global warming, the pattern of rainfall has changed,” Islam said.

This is true. For instance, Cherrapunji in Meghalaya, once the world’s wettest spot, received 972 mm of rainfall till 8.30 pm June 17. This is the third-highest rainfall in 122 years, according to the India Meteorological Department.

And all this excess water flows downstream. “Now, it takes just 6-8 hours for rainwater to reach Tahirpur in Bangladesh from Cherrapunji,” Islam added.

The number of natural disasters has been increasing in Bangladesh for the last 15-20 years. The country has been witnessing frequent cyclones, rising sea levels, salinity, river erosion, etc.

The number of people displaced due to extreme weather is expected to rise in the future. The World Bank estimates that 217 million people in six regions of the world will be internally displaced by 2050 if necessary steps are not taken to combat climate change.

Of these, 40 million will be displaced in the South Asian region. Bangladesh alone is expected to account for 19.9 million of those.

“Not only Bangladesh, no country in the world is adequately prepared if the average annual global temperature crosses 1.5 degrees Celsius. We need to reduce our dependence on coal, oil and natural gas. The power of the sun and the wind must be used,” Saleemul Huq, an international climate expert, said.