Flash floods and cloudburts have been reported in districts of Himachal Pradesh and Jammu and Kashmir, including the Ladakh region 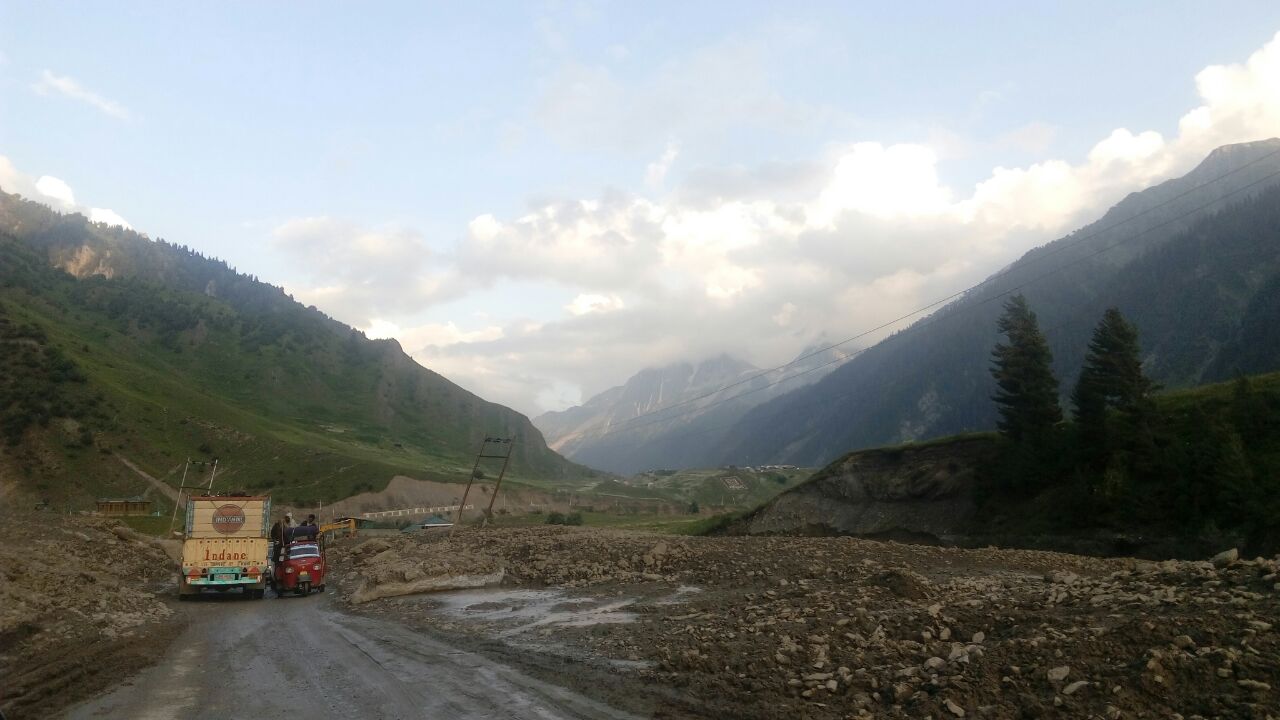 A stretch of road on Srinagar-Leh road, cleared immediately after a landslide (Photo: Neha Sinha)

Merely four days after flash floods hit two districts in Himachal Pradesh, the state government has issued an alert against heavy rainfall in the next 48 hours.

On August 7, heavy rains had caused landslides and flash floods in Himachal Pradesh, killing four persons in Mandi and Solan districts. According to Manmohan Singh, director of India Meteorological Department (IMD), Shimla, Mandi, Kullu, Una, Kangra and Bilaspur districts could witness heavy rainfall and landslides during the next week.

The district administration of Kullu has asked the residents to stay away from Beas river and its tributaries as it has surged considerably. According to IMD officials, the unprecedented rainfall between August 7 and August 8 was caused by a cloudburst over Solan valley. Hydromet division of IMD, Shimla has also stated that Arki, a municipality near Solan recorded 145 mm rainfall in less than an hour, which the officials say fits well into the definition of a cloudburst. Experts suggest if more than 100 mm of rainfall is recorded over an hour, it can be considered as a cloudburst. From the beginning of July till now, five cloudbursts have been reported by the authorities from various corners of the Western Himalayan region.

With 44 houses and 82 cowsheds damaged during the flash flood and a large number of cattle and vehicles swept away, Dharmpur tehsil in Mandi district was the worst affected area. According to the revenue department, three members of a family—Bachan Singh (90), his wife Gambhri Devi (75) and their daughter-in-law Shesha Devi were buried alive when their house collapsed at Sakraindhar village of Taher panchayat due to the landslides that were triggered by the weather event. Rescue operations are still on to find Sunder Singh, a resident of Langair panchayat, who was reported missing on Sunday. Total loss of up to Rs 20 crore has been reported.

Ani tehsil in Kullu district also faced major losses as structures raised by people along a tributary of Beas were swept by strong water currents. The National Highway-21 was blocked for two hours due to a massive landslide near Bilaspur while many interior areas remained cut off. Loss of property and damage to the roads was reported from Una, Chamba, Bilaspur, Naina Devi where heavy downpour was witnessed.

On the same days, heavy rainfall was also reported in Udhampur, Jammu and Ladakh region. While no loss of life has been reported from Udhampur and Jammu apart from landslides along the highways connecting rest of the India with Jammu and Kashmir, Indian Army’s northern command issued a release stating that Indus, Nubra, Shyok and their tributaries in Ladakh were flowing above the danger mark. News daily Indian Express had reported that on August 6 and 7, the Indian Air Force helicopters also rescued 22 British and French trekkers stranded in the high altitude regions of Ladakh. While IMD does not have any reliable data on cloudbursts in Ladakh region at the moment, experts suggest that thunderstorms and high rainfall have caused extensive damage. “Though reports are increasingly talking about cloudbursts, it is the thundershowers, and not cloudbursts, that have been disastrous for the region this season,” says Sonam Lotus, a scientist at IMD in Srinagar. “Ladakh is evidently witnessing all the impacts of climate change,” he adds.

Meanwhile, Bhakra Beas Management Board (BBMB) released water from the Bhakra and Pong dams on Monday, following which several low lying areas, including farms, in Rupnagar and Anantpur Sahib have been inundated. A BBMB official, in a press release, said these were unavoidable “controlled releases” due to heavy inflow of water into the dams to ensure that there is some capacity available in case there is sudden increase in water levels. The water level in Bhakra Dam stood at 1,662 ft on Monday. “The increase in water level is at about two feet every day. Due to the ongoing monsoon season, the situation can vary. On Monday, 10,000 to 15,000 cusecs of water (one cusec = 28.32 litres of water per second) was released. The inflow of water into Pong Dam resorvoir was greater with water level touching 1,380 feet on Monday. The BBMB informed the Punjab government and district authorities in downstream areas of both dams before releasing water.

(With inputs from Vani Manocha)