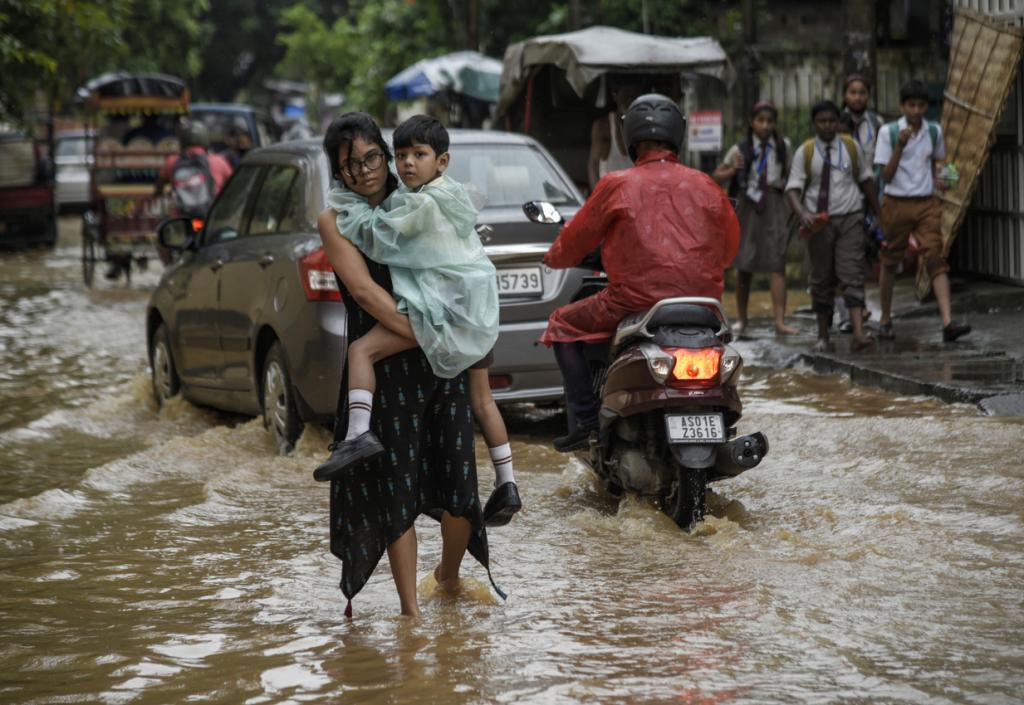 India suffered huge economic losses from floods and storms in 2021 as climate change has made these events more frequent. The country was only second to China in the Asian continent in this regard, according to the recently released The State of the Climate in Asia 2021 report.

Floods and storms accounted for 80 per cent of the natural disasters that struck Asia in 2021. Asian countries incurred financial losses worth $35.6 billion (nearly 2.9 lakh crores) in 2021 because of natural disasters. Flooding was the event with “by far the greatest impact in Asia in terms of fatalities and economic damage.”

This showed that the economic impact of such disasters is on the rise compared to the average of the last twenty years, according to the report released November 14, 2022.

The report published by the World Meteorological Organization and the UN Economic and Social Commission for Asia and the Pacific (ESCAP) said China suffered the highest economic loss in Asia ($18.4 billion) after flooding.

Also read: Here is how India counts loss and damage due to extreme weather

India suffered a total loss of $3.2 billion from flooding. The country faced heavy rains and flash floods during the monsoon season between June and September 2021.

These events resulted in about 1,300 casualties and damaged crops and properties, the report said.

The extremely severe cyclonic storm Tauktae (May 14-May 19) that formed over the Arabian Sea during the pre-monsoon season was the most devastating. The storm claimed more than 140 lives across western India.

This was followed by Severe Cyclonic Storm Yaas (May 23-May 28). It hit West Bengal and northern Odisha, causing damages worth Rs 20,000 crore and Rs 600 crore, respectively.

Cyclone Gulab (September 24-September 28), which landed on the Andhra Pradesh and Odisha coasts, accumulated damages to the tune of Rs 2,000 crore.

Cyclone Shaheen was formed from the remnants of Gulab and caused heavy rainfall in Gujarat. Finally, the year ended with Cyclonic Storm Jawad, causing heavy rainfall over the eastern coast.

Additionally, in 2021, thunderstorms and lightning claimed around 800 lives in different parts of the country, the report highlighted.

ESCAP’s Asia-Pacific Disaster Reports of 2021 and 2022 estimated that India would need an annual investment in adaptation measures at $46.3 billion. It is estimated to be 1.7 per cent of India’s GDP.

“The investment in adaptation is much lower than the annual average loss from disasters, which shows us how much economic losses we could be saving by investing in adaptation measures,” Sanjay K Srivastava, chief of Disaster Risk Reduction at ESCAP, told DTE.

Generally, comparison to the GDP reflects the capacity of a country to invest in adaptation. Small Island Developing States and Least Developed Countries always fought for this by comparing loss and damage after disasters to the GDP to reflect the vulnerability, Srivastava added.

“For Indian states, it depends on the risk context. For coastal states with an increased risk of cyclone surges, nature-based solutions assume significance. In the coastal states, protecting mangroves could help cushion the impact of storms,” Srivastava said.

India does not have a separate adaptation fund, but the money is embedded in several schemes by the agriculture, rural and environmental sectors.

For example, flagship projects such as the Mahatma Gandhi National Rural Employment Scheme, which had an annual budget of $13 billion in 2020, should address adaptation in disaster-prone areas. Around 70 per cent of its budget is marked to go into natural resource management and to build resilient infrastructure, Srivastava added.

Warming is particularly strong in the Arabian Sea and in the Kuroshio Current system. These regions are warming more than three times faster than the global mean upper-ocean warming rate, the State of the Climate in Asia 2021 report also highlighted.

“Upper-ocean warming is important because it directly affects the atmosphere in terms of convection, winds, cyclones and so on”, Raghu Murtugudde, visiting professor at the Indian Institute of Technology Bombay’s department of Climate Studies, told DTE.

The deep ocean does not affect the atmosphere directly, Murtugudde added.

The Arabian Sea is unique because it has pathways to receive excess heat through atmospheric tunnels and bridges. Mixed warm water from various oceans is pumped into it.

However, this is not the case with Kuroshio Current system. The current system takes warm water from the tropics and stronger winds force more heat into the current, Murtugudde explained.

“The seasonal rainfall over southern peninsular India during the northeast monsoon was exceptionally above normal (171 per cent of the long-term average) and was the highest (579.1 millimetre) since 1901,” the report read.

During the season, many low-pressure systems (wind speed less than 17 knots) formed in the south and adjoining the central Bay of Bengal.

These systems moved in a westerly/north-westerly direction and caused large amounts of rainfall, the report explained.

Murtugudde attributed this to La Nina. “The last two years were also La Nina years. During this time, the pressure patterns set up in India go from North to South, which drives circulations from Eurasia and China,” he added.

This can cause excessive rainfall patterns over parts of India, particularly in the Southern Peninsular, which gets the Northeast monsoon. The excess last year was related to the La Nina pressure pattern, he said.