New research shows the earthquake that struck central Nepal in April this year was only a partial rupture of the fault line, meaning another strong quake could be due in future 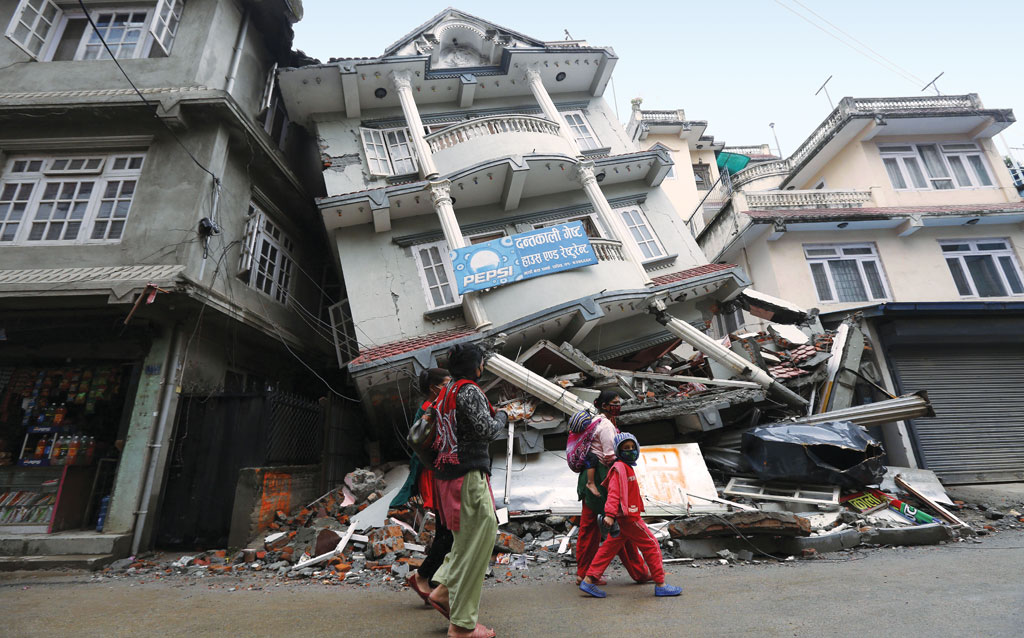 New research shows the earthquake that struck central Nepal in April this year was only a partial rupture of the fault line, meaning another strong quake could be due in future (Photo: Ravi)

New research shows the earthquake that struck central Nepal in April this year was only a partial rupture of a regional fault line, meaning another strong quake could be due in future.

The study, published today in Nature Geoscience, suggests the magnitude 7.8 earthquake that killed more than 9000 people released, or “unzipped”, stress on only a portion of the Main Himalayan Thrust fault, leaving the western portion of the line at risk of a large earthquake in the future.

The research team, led by Jean-Phillipe Avouac from the University of Cambridge in the UK, analysed the April 15 event using synthetic aperture radar imagery along with seismological measurements to show the location, geometry and nature of the fault patch that ruptured during the Nepal earthquake.

“The earthquake originated northwest of Kathmandu within a cluster of background seismicity that fringes the bottom of the locked portion of the Main Himalayan Thrust fault,” the researchers said in the paper.

“The rupture propagated eastwards for about 140 km, unzipping the lower edge of the locked portion of the fault […] Eastward unzipping of the fault resumed during the (Magnitude) 7.3 aftershock on 12 May.”

When a large earthquake occurs, the impact of the strain and stress release on a locked fault can set a series of ruptures in motion over time.

C P Rajendran, Professor of Geodynamics at Jawaharlal Nehru Centre for Advanced Scientific Research in India, who was not involved in the study, said there was a need to understand how earthquakes are influenced by their geographic location.

“Geodetic models indicate that the system remained nearly fully locked from below the high Himalaya to where it emerges along the foothills,” he said.

“Aside from the Main Frontal Thrust we also need to understand further the seismogenic potential of the hinterland structures and what role they play in the rupture processes”, he added.

“Studies along the Main Frontal Thrust in the central Himalaya imply over 600 years of elapsed time since the last great earthquake in this region. Such conclusions should, in fact, be a wake-up call for the administrators for bringing in various measures to lessen the impacts of such potentially devastating earthquakes.”

The next rupture need not be the rapture

Kristin Morell, Assistant Professor at the School of Earth and Ocean Sciences at the University of Victoria, said the study shows complexities that challenge common understandings.

“The earthquake did not rupture the Main Frontal Thrust, the fault that was often considered the culpable fault responsible for the largest events,” she said. “More earthquakes could occur in the region, especially in the area to the west.”

Morell said the recent earthquake revealed insights into the seismic cycle of this system.

“Building engineers need to use the findings of this study to prepare for future earthquakes across the entire Himalaya, including India, Bhutan, Nepal and other adjacent countries,” she said.

Eliza Berlage is Editor at The Conversation