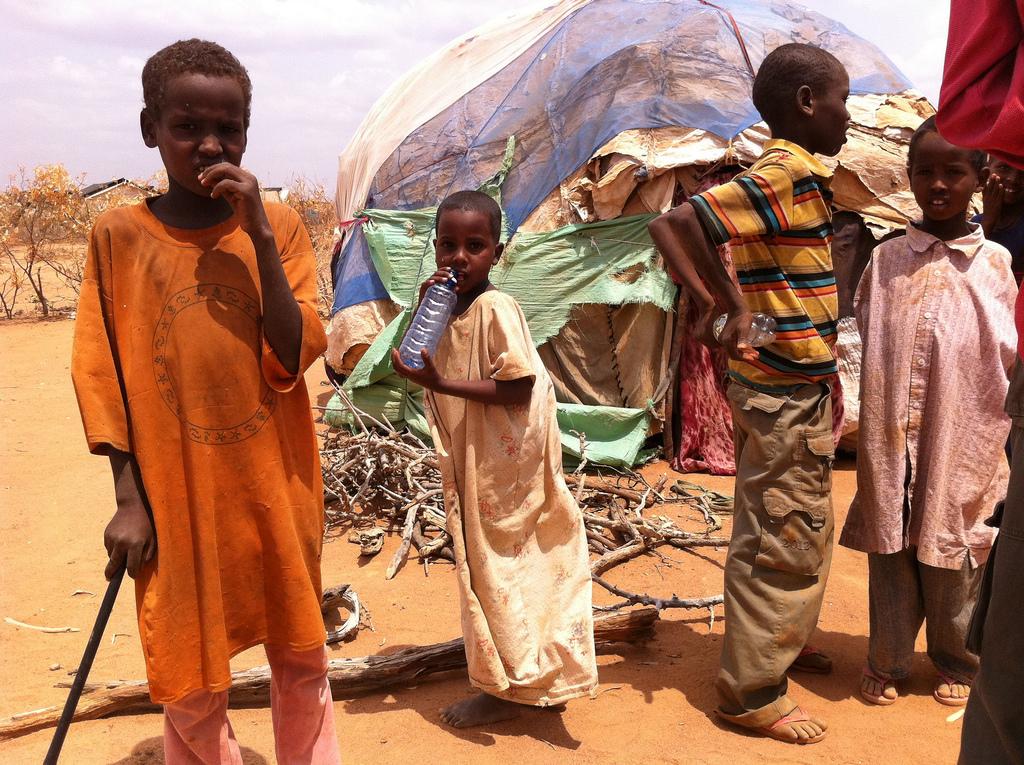 When we were kids, watching the Earth from space was fun: weather satellite images were eye candy displayed on the evening news. Today the data from these satellites help create the first line of defence for the 60 million people suffering food insecurity due to the recent massive El Niño.

We have mixed emotions about this success: we are glad that our information can help identify food-insecure populations before disaster strikes, but dismayed that such populations exist at all. Like the inventor of a better fire hose, we hate to see CHIRPS in use for drought early warning, but this is the reason we developed it.

The CHIRPS is a gridded rainfall time series that brings together high-resolution average rainfall data gleaned from satellites and weather station data to provide a comprehensive picture of rainfall patterns from 1981 to the near-present. Alone, the dataset can be used to assess droughts over a 35-year period. Together with longer station-based datasets like the 1900-2014 Centennial Trends archive it can be used to assess droughts over 50 or 60 years. This allows us to identify rainfall declines and specify precisely how bad a bad season is.

For example, data from CHIRPS, combined with the Centennial Trends archive, shows that northern Ethiopia is facing its worst drought in 50 years. Figure 1 shows a time series we produced to document the severity of the Ethiopian drought. We call this kind of figure a “science haiku”. It is years, if not decades, of effort boiled down into a simple info-graphic that we hope will motivate action.

Such graphics can also be spatial. In the case of southern Africa, rainfall for much of the region from October to February has been extremely poor. This widespread dryness is having a dramatic effect on food production, with sown fields showing barely a hint of emergence at a late stage of the season. As a result, maize production in Zimbabwe may be as little as one-quarter of the recent average.

For early warning of such droughts, it is necessary to gather data on rainfall and rainfall variation. If conditions that are drier than normal are considered against a historical backdrop, the severity of the rainfall deficit can be quickly evaluated. This, in turn, could inform drought responses.

Since the 1960s we have observed clouds from satellites in space. NASA’s Television Infrared Satellite was one of the first. By 1962 the NASA programme was providing continuous coverage of Earth.

The satellites housed two infrared television cameras that recorded the brightness of infrared radiation emitted from the Earth’s surface or clouds. These images left two profound legacies: a better understanding of our dynamic Earth; and a better means of tracking severe droughts.

To understand how the satellites work, we need to consider the relationship between the temperatures of an object and the intensity of the emitted radiation—or “light”, in the case of visible radiation. Two important aspects of electromagnetic radiation are:

The amount of energy emitted by an object increases dramatically as the temperature goes up. This allows us to discriminate, in satellite imagery, between cold clouds and the warm surface of the Earth. As seen from space, infrared images record dark cold clouds and warm bright emissions from Earth’s surface. When we see satellite images on the evening news these are typically reversed.

While everything on Earth emits electromagnetic radiation, the type of radiation is determined by its wavelength. This is a function of the object’s temperature: at the coldest end of the scale, the near vacuum of empty space emits radio waves; at the hottest extreme objects such as pulsars or the edges of black holes emit x-ray or cosmic ray radiation.

In measuring radiation, we are able to get a sense of temperature. Warmer places emit much more radiation than cold places. High-level clouds, for example, are much colder (about -40°C) than the surface of the Earth (about 15°C). By tracking how temperatures in the satellite images flicker between passing cold cloud tops and the warmer surface of the Earth, we can estimate the “cold cloud duration” of each day—the fraction of time that the satellite sees very cold cloud tops.

The radiation that is recorded by satellites and transmitted to Earth also provides an indication of precipitation. Very high clouds— particularly in the tropics—indicate deep convection, which could indicate precipitation. While a lot can go wrong with these estimates they perform reasonably well in many tropical and sub-tropical regions.

What geostationary satellites are particularly good at is seeing droughts. While seeing a lot of cold cloud tops may indicate that it is raining a lot, not seeing any cold cloud tops means it is definitely not raining. So if you know when and where to look—like in the middle of the grain filling period in a food-insecure place—and day in and day out you only see the hot surface of the Earth, you can be pretty sure of trouble.

A 35-year dataset allows us to better place current conditions in historical context.

The current Ethiopian and southern African crises are linked to the recent monster El Niño. El Niño sea surface temperature anomalies between December 2015 and February 2016 were much warmer than at any time in the historical record. The increase of 2.2°C was also much warmer than those of the recent massive El Niños in 1997/98 and 1982/83 (both an increase of 1.6°C).

This time series also displays a long-term warming trend, and a much greater frequency of strong (+0.8°C) El Niños. Since 1980, these have occurred once every four years. This is a rapid increase compared with the period from 1855 to 1979, when they occurred once every 14 years.

If extreme El Niño and La Niña events are becoming more common, the CHIRPS and Centennial Trends data sets will help us respond to these extremes.