Preparing for the deluge in Bihar

Despite excellent information from across the border from Nepal, and much preparation Bihar remains flood prone, with problems of communication with officers in the field and an embankment approach to flood management 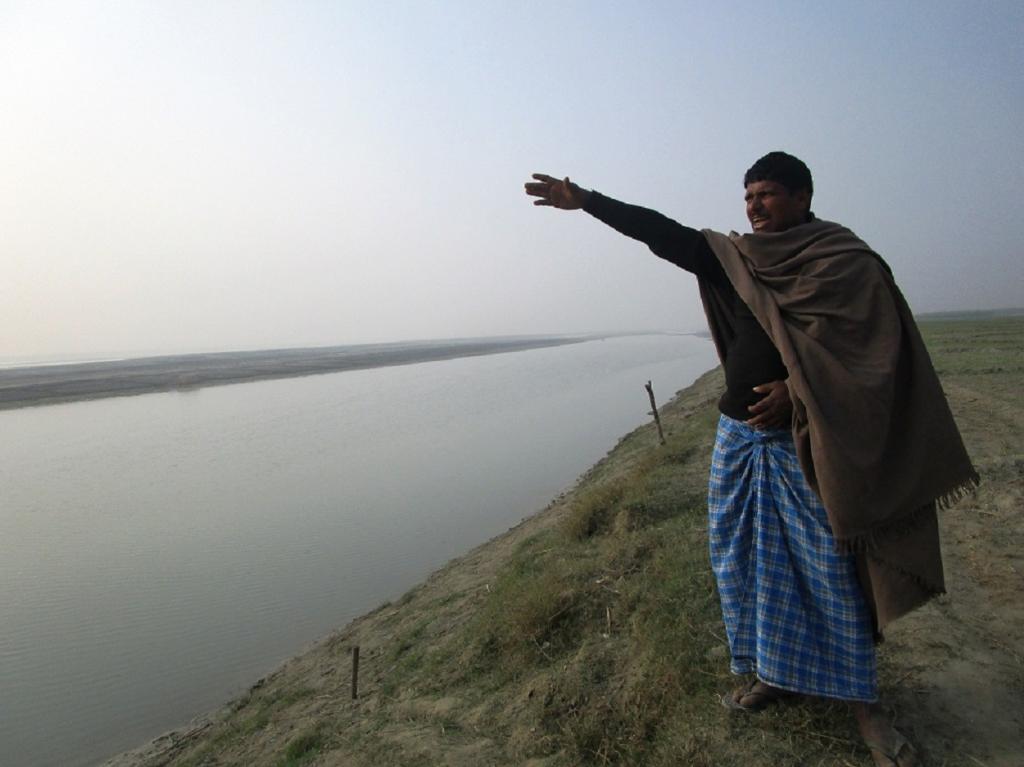 Lal Singh Yadav, a resident of Naika tola fears that soon Ganga ji (Gandak is referred to as Ganga by the local villagers) will wash them away. Credit: Nidhi Jamwal

After learning from repeated mistakes and negligence, the Indian state of Bihar is prepared to fight floods and flash floods this monsoon – at least on paper. Different government agencies claim that they have completed preparations for floods, an annual curse for millions.

A year after devastating floods that claimed the lives of 514 people and thousands of livestock in 21 districts, affecting nearly 17 million people, Bihar does not want a repeat. “We are fully prepared, ready and alert this time,” says Dinesh Chandra Yadav, the minister in charge of disaster management in the state.

On August 2, 2018 this year, the minister of water resource development in Bihar, Rajiv Ranjan Singh, said that there was no threat of floods in the state. This was especially important to the hundreds of thousands of people living in the flood prone regions of Seemanchal, Kosi and Mithilanchal in north Bihar. All eyes will be on the discharge of water in rivers flowing down from Nepal during monsoon due to heavy rainfall. Currently all the major rivers are flowing within the normal range and all the embankments are safe.

As a seasoned politician, Singh admitted that one cannot predict that there will be no floods this year. ”It is difficult and not easy to say anything on likely floods. We never know when the flood will come and when the embankment will breach. But we have to be fully prepared and ready to face it and fight till the last moment to save the lives and embankments,” he said.

This year, the government agencies have used high tech tools, information systems, a flood forecasting system and have stocked sandbags and other flood protection material near embankments. They have stationed engineers and labourers at vulnerable places in an effort to react quickly, if a flood does occur.

“Unlike in the past, this year we have completed preparation on ground zero to fight and manage floods. We have smooth coordination with Nepal on floods. We hope its result will be positive,” Yadav said.

According to the official website of the state’s Water Resources Department (WRD), “Almost all rivers of North Bihar have their origin in Nepal and even beyond. As such, the issues related to utilisation of water resources and flood control, related to these rivers, have international aspects. The benefit provided to both India and Nepal by the Kosi and Gandak Projects have been result of the spirit of goodwill and cooperation between people of the two countries who have very close historical and cultural ties.”

Arun Kumar Singh, principal secretary at the WRD, said that cooperation between Bihar and Nepal exist that help to monitor and control floods, “We exchange information in advance that come handy to alert likely affected people.”

Rajesh Kumar, the engineer in chief of flood control and water drainage, WRD, said that there is good operational cooperation and coordination between the government of Nepal and the state of Bihar. Kumar said a nodal officer of Bihar is deputed at Kathmandu to keep a close watch on the concerns of the state during the monsoon season. WRD officials are also camping at important places near the Kosi, Gandak and Bagmati rivers near the India-Nepal border to collect information and alert the flood control cell if necessary.

“There is no such thing like lack of cooperation and coordination from Nepal side. We get timely information from them and communicate to all concern government agencies” Kumar said.

He also said that some officials engaged in monitoring floods have been asked to watch the official website of Nepal related to catchment areas of rivers. This has proved fruitful in anticipating floods. A senior official of the WRD told thethirdpole.net that advance information from Nepal reached on right time but the problem lay with timely communication to concerned officials and districts. “Without delay Nepal communicates to us about any development in the catchment areas of rivers and alerts us.”

Arun Kumar Singh from the WRD said, “We have identified more than 20 super sensitive places at different locations on Ganga, Kosi, Bagmati, Gandak and Kamla Balan embankments. Senior officials including engineers have been deputed there to take care of any threat to embankments.”

According to him, this year the government has completed 423 anti-erosion and flood protection works at different places at existing embankments that cost INR 12.5 billion (USD 182 million). The flood protection plan was prepared on the basis of suggestions made by a team of 15 retired engineers, who were part of the flood fighting force. The government has deployed 12 senior engineers to keep a watch on flow of water at super sensitive spots, in addition to permanent deputation of junior engineers and Home Guards at each 10 km section of the embankments across the state.

If not flood, drought

This year, during the monsoon season that started in mid-June and will go on till mid-September, it was not the floods that were of the most concern. Until the third week of July, the rainfall that Bihar had received was 48% deficit. The government directed concerned departments to gear up to face drought. But heavy rainfall in the last week of July and continuing in August has come as a big relief, particularly to farmers.

Vyas Ji, vice chairman of the Bihar State Disaster Management Authority (BSDMA), said that though there is no possibility of floods this time, the state had made preparations at all levels for it, “Preparations in accordance with standard operating procedures have started since April this year. Identification of shelter places, arrangement of feed for animals have been done. NDRF (National Disaster Response Force) have been deployed, divers deputed at selected points.”

The state government has set up a Flood Management Information System (FMIS) in capital Patna with its main focus on improving flood forecasting with increased lead time and accuracy. “Due to lack of early warning and preparedness measures, floods wreaked havoc in the state” in the past, an official of FMIS said.

In a bid to send a strong message to engineers deputed on different embankments and other works related to flood control, the state government had dismissed three engineers, including one chief engineer and two executive engineers, on charges of laxity during floods in 2017.

Not everybody is impressed, though. Dinesh Mishra, Bihar’s foremost river expert, said the claim made by the government of full preparation for floods is rhetoric, and nothing more than that. Every year they claim the same thing including in 2007, 2008 and 2017 when massive floods hit Bihar, he added.

“I have been suggesting for years to merge the Water Resources Department and Disaster Management Department into one for smooth coordination of flood control and its management on the ground. But [until now], the government has hardly paid any heed to it. The government should know where the problem lies. Main approach should be to focus on how to prevent floods, not relief oriented policy, Mishra said.

What worried him most was the lack of accountability on flood control. “The government has to ensure accountability by making ministers to engineer in chief concerned responsible for what happens.”

Mishra, who has spent over four decades studying rivers and floods in Bihar, reiterated that 3789.96 kilometres of embankments had not helped the people of Bihar. “Constructing more flood embankments, with breaches at dozens of places, [help those with] vested interests, certainly not the people.”

With prompt cooperation from Nepal, but still a history of embankment failures, the problem may lie more within the state than without.

Mohd Imran Khan is a Patna based journalist