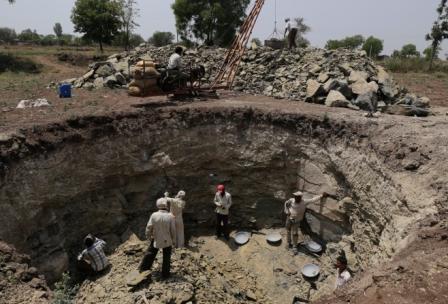 The Supreme Court has directed the Centre to formulate a national plan on drought management at the earliest and revise the current drought manual.

The petition has demanded timely compensation for farmers for crop loss and input subsidy for the next crop, restructuring of crop loans, availability of jobs under the Mahatma Gandhi National Rural Employment Guarantee Act and distribution of food grains to the drought-affected people under the National Food Security Act. Besides this, Swarajya Abhiyan has also demanded that children be provided milk or eggs as part of the mid-day meal scheme or the Integrated Child Development Services and fodder for cattle.

In its order, the apex court directed the Union government to revise the Drought Management Manual at the earliest till the end of 2016.

The drought manual was first published in 2009. According to the Supreme Court, several new developments have taken place and there is a need to revise the contents of the manual.

The manual should carry weightage of all the four indicators of drought with fixed determinants. These indicators are rainfall, storage water level in reservoirs, surface water and ground water levels and sowing and crop conditions.

Though the current manual emphasises that rain deficiency is the most important determinant of drought, state governments give greater weightage to the crop sown area out of the total cultivable area.

The apex court also asked the Centre to ensure that the manual should declare drought timely.

The adverse or negative impact of a delayed declaration of drought affects the people, particularly women and children, and postpones the required assistance, it declared.

The Supreme Court directed the Centre to constitute a special group, the national disaster relief force, which can assess drought in a time-bound manner. At present, there is no such group. The force should be constituted with regular experts within six months, the apex court said.

The Supreme Court also asked for the provision of separate funds under the national disaster mitigation fund to provide timely relief to the drought-affected people.

It also directed the states and the Centre to use technology to assess drought timely.

The apex court also took a dig at Haryana, Bihar and Gujarat for not declaring drought as yet.

It said that silence on the part of these states would only perpetuate the distress to vulnerable population groups and deprive the poorer sections of timely assistance to lead a dignified life.

The Supreme Court directed the secretary of the Union agriculture ministry to urgently hold a meeting with the chief secretaries of Bihar, Gujarat and Haryana to review the drought situation and persuade the states to declare drought in their affected districts or blocks.