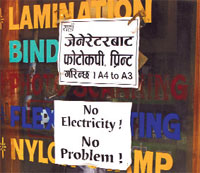 REELING under routine 12-hour power cuts daily, Nepal has launched an ambitious multibillion rupees initiative to add 2,500 megawatts (MW) of electricity by 2016. Addressing the country’s Parliament on March 23, Bharat Mohan Adhikary Deputy Prime Minister who also holds the finance and energy portfolios, declared the next four-and-a-half years as a period of “energy emergency”.

The ‘energy crisis bill’ that will be tabled in Parliament in April promises to free Nepal from load-shedding by 2016, for which it has earmarked Nepali rupees 20 billion ($275 million). Of this, US $68.3 million is to be allocated for power sector reforms, while another US $204 million is for new hydropower projects. The bill includes significant power policy revamps, a determination accelerate private sector investments in the power sector, and announces a powerful three-member energy commission with sweeping powers to tackle the crisis.

Nepal’s oft-quoted hydro-potential of 43,000 MW has remained a chimera. Against a peak-hour demand of 980 MW that grows by 9.2 per cent each year, the country faces a shortfall of 168 MW in the rainy season, which shoots up to a deficit of 588 MW in the dry winter months.

The country’s power sector is in a mess with ageing power infrastructure, transmission and distribution losses at well over 25 per cent, and a hemorrhaging Nepal Electricity Authority (NEA) that has accumulated losses of over Nepali rupees 12 billion.

It will get worse in years to come. NEA’s own load forecasts project the peak load demand by 2025-26 to be 3176.7 MW, or 14971.2 GWh of energy. Projects are routinely delayed, and if the current installed capacity of 668 MW is not enhanced, load shedding is expected to go up to 17 hours in the dry- and five hours in the wet season, by 2011-2012, according to Ratna Sansar Shrestha, a senior water and energy analyst who finds the government’s ambition unattainable.

New hydro projects have been stymied by the decade-long civil conflict which ended in 2006 and that kept investors away, while electricity transmission lines destroyed during the Kosi River floods in 2008 has made the crisis acute.

“Hydro projects are not something you pull out of a hat. Today, there is only about 700 to 800 MW of new projects in the pipeline. Going by the track record of power projects in Nepal, I don’t see how they are going to install 2500 MW in only four-and-a-half years. Also, given the plant load factor, this will add only about 1400 MW in the wet season, and 800 MW in the in the dry season,” Shrestha said.

Most of Nepal’s hydropower plants are run-of-river projects that produce only a third of their installed capacity in the dry winter months, precisely the period in which demand is the highest. There are calls now to construct more reservoir-based hydroelectric projects to supplement the 92 MW Kulekhani reservoir hydropower plant. The country imports about 92 MW from India.

The energy crisis bill sweetens the deal for private investments in the power sector. It gives an income tax waiver for 10 years on new hydro power plants, a subsidy of Nepali rupees 1 million per MW installed capacity on VAT for cement and steel used for constructing power plants, and a 20 per cent hike over existing power purchase agreement rates, together with concessional loans and refinance facilities for power projects.

The bill also waives custom duties on solar power panels, and supports private investments in industry and agricultural waste-to-energy power plants. Investors will be provided special security by making the obstruction of hydro electricity plants punishable by a five-year prison term for offenders.

But independent power producers (IPP) remain cautious. “Our main worry is the stipulation that IPPs will need to pay a fee of Nepali rupees one million for every MW of installed capacity for new projects above one MW,” said Pradeep Gangol, executive manager of the Independent Power Producers’ Association, Nepal. “We also need clarity on the on the tariffs for power purchase agreements,” he said.

The draft bill gives enormous muscle to a proposed three-member High Powered Energy Crisis Mitigation Commission, appointed by the cabinet, with the singular objective to end the energy crisis by generating 2,500 megawatts of electricity by 2016.

The commission, accountable directly to the council of ministers, has the authority to issue and cancel licenses, negotiate directly with domestic and foreign power producers, act as a single window clearance body for procedures related to land acquisition, forest diversion and environment impact assessments. It has the authority to order security forces to fire on those obstructing hydropower development work, a measure of the government’s desperation to get projects off the ground.

The electricity crisis bill is likely to draw flak when it is tabled in Parliament in April. The UCPN (Maoist), the largest party in the Constituent Assembly, supported the proposed bill, but was concerned by the ‘unilateral’ decision of Bharat Mohan Adhikari, who holds the dual ministerial portfolios of finance and energy, to present the bill without holding consultations with other bodies. The CPN-UML too was peeved at not being consulted over provisions of the bill. The Nepali Congress has expressed reservations that the bill in its current form will undermine existing institutions, including the Ministry of Energy, Water and Energy Commission Secretariat, Department of Electricity Development and the Nepal Electricity Authority.