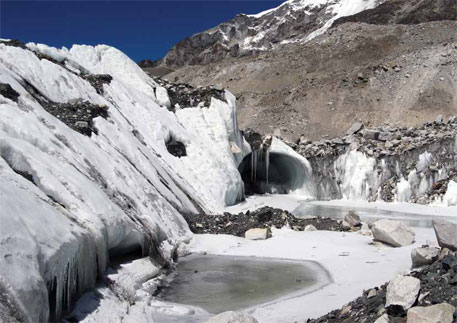 The area covered by glaciers in Nepal depleted by 24 per cent between 1977 and 2010; during the same period, ice cover decreased by 29 per cent. These are the findings of a report jointly prepared by International Centre for Integrated Mountain Development, Nepal, and Norwegian ministry of foreign affairs. The shocking data emphasises on fast changing climate and a need to take adequate actions.

The report says maximum change took place between 1980-90. The high Himalayan region contains important freshwater reserves in the form of glacier ice. Glacial shrinkage will have an impact on the long-term availability of freshwater from these reserves, it adds.

The overall land area of Nepal covered by glaciers decreased from 3.6 per cent to 2.6 per cent. The loss of ice reserves increased between 2000 and 2010, the report states. 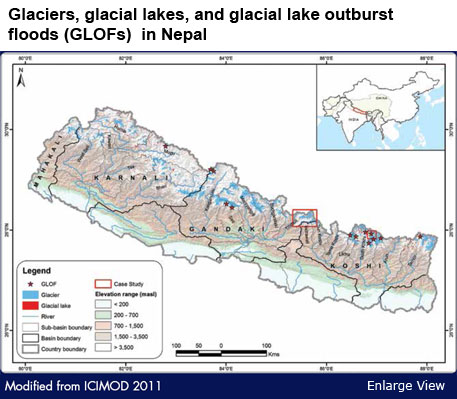 The number of glaciers in the country in 2010 was 3,808, an increase of 378 glaciers since 1977. This indicates that individual glaciers are shrinking, retreating, and fragmenting. The changes appear to be linked primarily with a marked rise in average temperature associated with global climate change, the report notes.

Apart from losing freshwater reserves, the depleting glaciers will have many more implications for human life. Due to fast melting of ice, flow in rivers will increase. But in the long term, this will lead to reduction in amount of water flowing in the rivers. The authors argue in the report that the frequency of glacial lake outburst flood (GLOF) will increase. Some small-sized glaciers face the threat of disappearance if the trend continues.

The trends presented in the report are overall trends. The authors emphasise the need to study individual glaciers and observe local trends. This would help, they say, to project future scenarios and develop plans for mitigation and adaption. 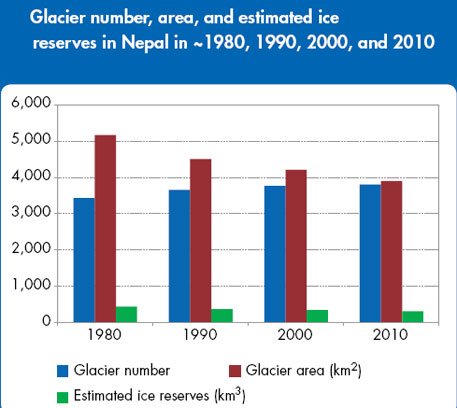