Some of the 33 Chilean miners trapped 700 metres underground for 69 days had informed the management about the risk of a cave-in three hours before it occurred. Their bosses told them not to stop the work.

The workers had heard loud noises inside the San Jose copper and gold mine on August 5. The mining firm denied receiving any warnings. President Sebastian Pinera has vowed Chile will sign an international agreement on mine safety.

Chile produces a third of the world’s copper, but the South American country is not known to provide good working conditions. Hundreds of dilapidated, centuryold mines are present, employing thousands. Thirty five miners have died in accidents in Chile this year.

Construction of an airport in Modlin, 40 km from Warsaw, has come under fire because the area is a bird habitat. Protesters want the airport’s investor to buy 700 hectares of swamps and move all the birds from Modlin to the Bialowieza primeval forest.

If company gives in to the demand, it would have to pay US $252,000 for swamps to house the birds. Modlin airport’s president of the board made light of the protest, adding ecologists are objecting to all construction investments in Poland. The airport is billed to be ready for the Euro 2012 soccer championships.

A Global Positioning System (GPS) device has been fitted into the horns of five rhinos living in a reserve in South Africa’s North West province. The device, inserted by drilling a small hole in the inert or dead part of the horn, will help protect the animals from poachers.

Besides GPS tracking, the device is equipped with alarm systems to alert wardens of unusual movement or movement outside the Mafikeng Game Reserve. Over 200 rhinos have been slaughtered in the country since the beginning of this year. Demand for rhino horn is high. It is used in traditional Chinese medicine.

To reduce the demand for illegal logging, the Brazilian government will auction large chunks of the Amazon rainforest to private timber companies and cooperatives. Illegal logging has destroyed almost 20 per cent of the Amazon.

The government will grant private companies logging concessions for nearly one million hectares (ha) by the end of the year. Within four to five years, it will be extended to 11 million ha. Existing concessions total 150,000 ha. Most of Brazil’s Amazon timber is consumed domestically.

WATER RESOURCES
FROM FARMS TO BASIN

An authority which looks after Australia’s largest river system, the Murray-Darling basin, has proposed a cut in water allocation for irrigation. Irrigation rights would be reduced by 3,000 to 4,000 gigalitres a year, with farmers getting 27 per cent cut. The Murray-Darling Basin Authority took the decision to secure the basin’s environmental health and increase water flow in its 23 river systems and 30,000 wetlands.

The basin, which occupies about one-seventh of Australia and is home to 10 per cent of the country’s population, is badly degraded due to over-allocation of water rights by state governments. It accounts for 40 per cent of national farm output.

The UN Food and Agriculture Organization said it would suspend its efforts to eliminate the deadly cattle plague, rinderpest, after scientists announced that they have eradicated the virus. Over 80 per cent of cattle who contract the virus die.

The virus originated in Asia but spread worldwide through imported livestock. The disease causes respiratory disease and gut problems that lead to diarrhoea, dehydration and eventually death. 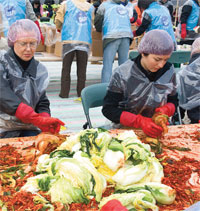 South Korean government has temporarily abolished tariffs on cabbage and imported extra stock from China to save the country’s national dish, kimchi. Heavy rain, and suspected hoarding, forced the price of cabbage, the main ingredient in kimchi, to rise about five times last year’s price. A head of cabbage now costs US $9.

CARBON EMISSIONS
FLIGHTS IN, SHIPS OUT

All 190 nations that are part of the UN’s International Civil Aviation Organisation signed a deal to reduce aviation’s impact on climate change. The agreement sets targets for improving fuel efficiency by two per cent annually till 2050.

It also defines capping carbon emissions from 2020, and setting a global carbon standard for aircraft engines by 2013. The EU in 2008 said airlines should be included in its emissions trading scheme, which forces industry to pay for permits for each tonne of carbon dioxide they emit.

Maritime nations have refused to agree on proposals for technical and operational measures to cut carbon emissions. They were blocked by developing nations, including China and South Africa, which cited disproportionate effect on their shipping industries. Shipping and aviation each account for three per cent of the world’s total emissions.

At least 14,662 people in a remote Tibetan region have been diagnosed with a rare and incurable bone disease. Doctors suspect a fungus in barley, a staple food in the plateau, causes Kaschin-Beck disease. Low iodine intake may be another cause, health experts said.

Patients develop thick and deformed joints, which eventually prevents them from moving. The government is relocating to prevent the spread of the disease. In the past five years, nearly 20,000 residents have been relocated at the cost of US $13.55 million.

Federal regulators in Canada have asked industry to voluntarily end the production, import and sale of jewellery containing cadmium for children. Cadmium is a toxic, heavy metal and carcinogenic. Government says tests have shown that the metal is increasingly used as a substitute for lead in cheap, costume jewellery. The government worries that children might suck, chew or swallow jewellery, which could lead to health problems.

An EU arm has proposed a temporary ban on livestock cloning in the 27-nation bloc and on the use of cloned farm animals and sale of food produced from such sources. The European Comission said cloning should be allowed only for practices such as saving species from extinction or breeding performance animals like racehorses or fighting bulls.

The commission ruled out the possibility of banning food derived from the offspring of clones due to difficulty in tracing meat and milk products. Animal cloning has a success rate of less than 20 per cent since most cloned animals die during or shortly after birth. The technique is complex and costly.

Denmark is the only EU state that has banned animal cloning for commercial purposes.

Environmentalists and the timber industry in Tasmania ended a three-decade-old war with a deal to end logging in the state forests. The agreement will see loggers shifting to a sustainable plantation industry. It commits to eventually stop logging in the entire country’s forests which could leave 3,500 jobless. Demand for environment-friendly timber has soared in Tasmania’s biggest market, Asia, but the forestry industry is declining. Over the past 25 years, tens of thousands of hectares of eucalyptus forests have been cleared.