A four-day people’s conference on climate change in the central Bolivian city of Cochabamba rejected the UN initiative to pay countries not to cut down trees through Reducing Emissions from Deforestation and Forest Degradation (redd). The World People’s Conference on Climate Change said redd is backed by rich nations and institutions like World Bank that disregard indigenous people’s rights. The meeting also challenged UN’s definition of forests which permits monoculture plantations and transgenic trees; it proposed community-led reforestation programmes instead. The conference, attended by non-profits, scientists and delegates of 145 countries, said rich countries should prepare to compensate countries at risk from climate-linked destruction. The conclusions of the conference are expected to be presented at the Cancun Conference of Parties later this year.

Zambia is pushing ahead with formulating an anti-counterfeit law that includes medicines. The authorities said the legislation aims to curb crimes related to intellectual property rights. The law is seen as a threat to import of cheap generic drugs. But the authorities said generic medicines won’t be hindered as they are produced with licences from the brand owners. Activists questioned the bill as Zambia already has a law against piracy and counterfeiting, implemented by a regulatory authority. Uganda too has drafted a Counterfeit Goods Bill, with funds from the European Union. Indian pharma company Cipla has partnered with a firm in Uganda to produce generic antiretroviral and antimalarial medicines; similar initiatives are on in Ghana, South Africa and Mozambique. 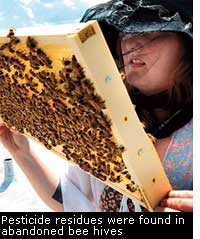 Lack of data on causes of cancer-related deaths around uranium mines in Nigeria is allowing French company Areva escape censure. Recent research by Greenpeace suggested Areva’s public claims of decontamination of populated areas near its mines are false. High radioactivity persists in towns and rural areas near the mines, affecting some 80,000 people, it said. But company doctors denied any link between deaths among mine workers and radioactivity from mining. Areva is operating two uranium mines in the country since the 1960s for its nuclear power projects in other countries. Earlier research by Greenpeace along with an independent French investigative commission in 2007 had found abnormal levels of uranium in the soil near the mines and radioactive gas radon in the air. Areva claimed it undertook decontamination measures.

Commercial beekeepers in the US lost a third of their honey bee colonies during winter, according to the annual survey by apiary inspectors of the US government’s Agricultural Research Service (ars). Subtle interactions between nutrition, pesticide exposure and stress factors are converging to kill honeybee colonies, ars researchers said. The bee colonies started disappearing from 2006 in the US and may cause food scarcity as bees pollinate 90 per cent of commercial crops, including apples, avocados and cucumbers. In some commercial operations, 50 per cent honeybees were lost. 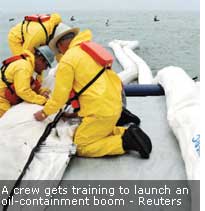 The oil spill caused by the sinking of a BP-owned deepwater oil rig in the Gulf of Mexico threatens the coast of the US state of Louisiana. Mexico is also preparing to deal with the environmental effects of the continuing oil leak from the oil well in the sea floor. Energy giant BP tried to plug the leak without success. Floating oil barriers were placed to protect most sensitive coastal areas like a national wildlife refuge in Louisiana. “If the projections remain steady, the oil slick will not reach Mexico. But if the weather conditions change, it would mean an environmental disaster Mexico is not prepared to cope with,” said Gustavo Ampugani, Greenpeace International political coordinator for Latin America. Eleven persons were killed and 17 injured when the Deepwater Horizon oil rig, leased by BP from a Swiss firm, exploded and caught fire. Greenpeace Mexico warned the water pollution threatens marine fauna, waterfowl, beaches and wetlands.

Lawmakers in the US called on president Barack Obama to develop wind power along the coasts and reverse his recent decision to back more offshore oil-drilling in US territorial waters. Democratic lawmaker Rush Holt said wind resources, in the long term, are more important than fossil fuels. He said off-shore wind power could supply more than half the electricity needs of the eastern United States. Obama said he still believed domestic oil production is an important part of overall strategy for energy security. The Obama administration, meanwhile, approved the first offshore wind farm project in the US. The 130-turbine Cape Wind project will be located near Nantucket Sound off Massachussets. The 420 MW project will produce enough electricity for 400,000 homes. In Germany, the first offshore wind turbines started operating near the North Sea coast. The $333 million project generates enough power for about 50,000 households. 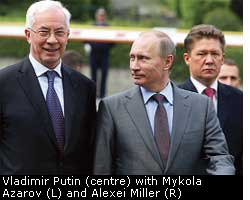 Prime minister Vladimir Putin proposed merger of two large gas firms—Russian Gazprom and Ukraine’s Naftogaz—at a meeting with Ukranian premier Mykola Azarov. Ukraine gas pipelines are the key to Russia’s Europe-bound gas exports. Gazprom, the world’s largest gas producer, cut supplies to Ukraine twice in the past four years, reducing flow to Europe. While Ukraine said it is considering the proposal, Gazprom chief Alexei Miller said discussions with his Ukranian counterpart will begin this month. He said asset swaps would be discussed to give Ukraine access to Gazprom’s reserves and Gazprom in turn would have access to Ukraine’s gas pipelines. He said Russia was ready to invest on the old pipelines. The proposal won’t affect Russia’s plans to build the South Stream gas pipeline to supply gas to Europe. Ukraine’s opposition parties criticized the proposal as a takeover, not a merger.

The Arctic region is caught in the cycle of ice loss and temperature rise which could speed up ice cover loss, scientists have confirmed. A new analysis shows dwindling ice cover is responsible for unusual levels of global warming in the region. Researchers said the concept of the Arctic sea ice having a tipping point is debated and it could not be proved if that tipping point has passed. But the emergence of ice-temperature feedback cycle can only increase warming, they said. Arctic temperatures are said to have risen twice as fast as in the rest of the world. Scientists suspected loss of sea ice earlier but other factors like changes in wind and ocean currents were also blamed. 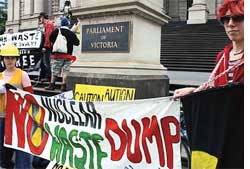 Aboriginal landowners in Australia’s far north are resisting government plans to construct a nuclear storage facility on their land. Diane Stokes, an indigenous woman representing Warumungu and Warlmanpa tribes in the Northern Territory, said nobody in the region wants radioactive waste dumped at Muckaty Station near Tennant Creek Town. A bill before the Australian parliament says Ngapa clan members voluntarily nominated the site. But other indigenous landowners said they were not consulted. The country’s radioactive waste from medical and industrial research using nuclear material is currently stored at various sites, including outstation sites in Scotland and France.