Nine months after Zimbabweans voted him to steer the country out of the economic and political rut, Morgan Tsvangirai was sworn in as prime minister on February 11 under a power-sharing deal with President Robert Mugabe. In his inaugural speech, he vowed to stabilize the country's economy as his first priority, promised to pay soldiers and public workers in foreign currency by March and asked striking teachers and doctors to go back to work.

While political analysts doubt if Tsvangirai and Mugabe will be able to establish a working relationship, Zimb-abweans pin their hopes on Tsvangirai to bail out the country from hyperinflation, check the worst ever cholera epidemic and revive the health and education systems that barely function.

A splash of rainfall in mid February, failed to relieve northern China's worst drought in a century. Low rainfall since October 2008 has affected more than 9.3 million hectares of land across six provinces, considered the country's breadbasket. About 3.7 million people and 1.85 million livestock are short of water and up to 63 per cent of the region's wheat crop is threatened, according to the nation's drought relief agency. While authorities are carrying out cloud seeding operations in a bid to spark rain, environmentalists say the low rainfall has merely exacerbated a long-term problem of the region. Northern China has over 40 per cent of the country's population, more than 50 per cent of the arable land and many industries due to its coal reserves. But it has less than 20 per cent of the country's total water reserves. The water table has dropped in the last three decades due to intensive agriculture, industry and rapid urbanization. 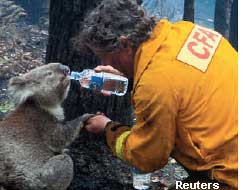 Cooler weather helped thousands of firefighters get a grip on Australia's bushfires that killed at least 189 people, left 7,000 homeless and wiped out 20 small towns in mid-February. Only a few hundred animals have survived the blazes that devastated over 400,000 hectares in the state of Victoria; millions of livestock, kangaroos, wombats, native birds and reptiles are feared dead.

Fanned by strong winds and a heatwave, the fires tore through the state for almost a week. Premier John Brumby called it the country's worst natural disaster in 110 years. Though the state police said the fires were set deliberately and arrested the arsonists, scientists blame global warming for conditions that fuelled the disaster. Victoria, and parts of South Australia and New South Wales, experienced unusually high summer temperatures, hovering around 46oC in late January and early February. This dried up the vegetation which fed the fires.

us economy
10 per cent stimulus

After much scrambling, the US Congress approved the US $789 billion economic stimulus package, which President Barack Obama said will help "get our economy back on track". But as the Congress hammered out details, it earmarked a little more than 10 per cent of the package for energy and environment. US $50 billion was allotted towards energy programmes such as subsidized loans for renewable energy projects, developing smart grids for transmitting electricity more efficiently, offering rebate on energy-saving appliances and making government buildings more energy efficient. About US $30 billion will be spent on public transport, high speed trains and other public works.

To curb illegal fishing, Tanzania plans to install cameras in its territorial waters in the Indian Ocean. The country's fishing industry has been hit due to increasing number of unlicensed vessels in Tanzania's territorial waters. Though only 90 vessels were licensed, more than 500 are operating in the Indian Ocean, said minister for livestock development and fisheries John Magufuli. The cameras would enable officials to detect unlicensed vessels, he said. According to Tanzania Fisheries Research Institute, illegal fishing leads to an annual loss of US $310 million to eastern African countries including Tanzania. 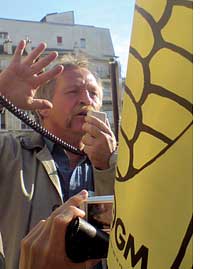 A report by the French food safety agency on genetically modified, or GM, maize has come as an embarrassment to the government.

The agency, in its report, said there is no evidence to support the view that the insect resistant mon 810 maize developed by US biotech giant Monsanto posed a health risk. This contradicts an earlier report that prompted France to impose a ban on the maize in February 2008. Just hours after the report was made public, prime minister Francois Fillon defended his government's stand saying the ban remains in force "until the environmental risks are clarified". The agency report concerns the health aspect, rather than the environmental risk, Fillon said.

Meanwhile, the European Commission, the EU's executive arm, has called on France, as well as Austria, Greece and Hungary, to lift safeguard measures against mon 810, the only GM crop approved in the EU.

Settling grievances that date back more than 150 years, the New Zealand government has agreed to pay NZ $300 million (US $157 million) to the country's eight indigenous Maroi tribes.

The amount was to compensate for illegal land acquisitions and violations of the Treaty of Waitangi--an agreement on land and human rights reached by British settlers and the indigenous people in 1840 that guaranteed them control over land and other natural resources. The government also acknowledged Maori authorship of the Haka, the war dance used by the All Blacks rugby team. The eight tribes comprise some 12,000 members and will receive half the amount in cash and the rest in rents from government-owned forests and greenhouse gas emissions credits. Though Maoris make up 15 per cent of New Zealand's population, they remain impoverished. "The redress will unlock significant economic development potential for the tribal groups," said the government.

The project dubbed Evenkia was planned in the 1980s but got cancelled after the Evenks said the dam would flood their villages, forcing them to relocate and abandon their traditional way of life. The indigenous community has the constitutional right to remain on its ancestral land. After two decades, the government plans to revive the project as part of its plan to double hydropower generation by 2020. The project, it is feared, will alter the region's fragile ecosystem and disturb underground nuclear test sites, abandoned since the Soviet era. 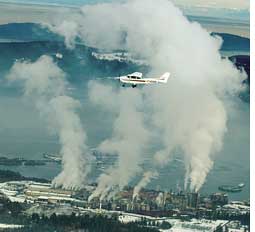 Canada's environment commissioner criticized the federal government for spending money on emissions reduction programmes without assessing if the money actually makes a difference. The commissioner criticized a C $35 million (US $28 million) scheme launched in 2006 to give tax credits to those who use public transport. The government had said the measure would cut at least 35,000 tonnes of greenhouse gas emissions a year. However, there is no way to evaluate the emissions reductions that have resulted from the tax credit, the commissioner said in his report. He also criticized the C $1.5 billion (US $1.2 billion) clean air trust fund, designed to cut emissions by 16 million tonnes a year between 2008 and 2012. Ottawa handed over the money to Canada's 10 provinces and three territories but did not oblige them to account for how the cash is spent.

To reduce a backlog of 770 million patent applications, the US Patent and Trademark Office plans to adopt a deferred examination procedure. It would enable the office to dismiss a patent application that is not complete or disputed unless the applicant gives a specific request for deferment. At present, the office can only defer it for three years. The plan will be included in the patent reform bill.