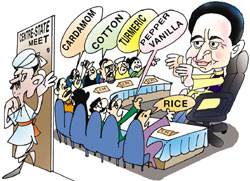 Two things that Union minister of commerce Kamal Nath claims as the most successful outcome of the World Trade Organization's (wto's) Hong Kong ministerial are the agreements on special products (sps) and the Special Safeguard Mechanism (ssm) for the developing world. But with the April 30 deadline for implementing the agreements coming to an end, India has made no headway in pushing the process along.

The Hong Kong ministerial recognised that developing countries have the flexibility to designate certain products in the sp category, on the basis of three criteria -- food security, livelihood security and rural development needs. Such products could attract higher tariffs or protectionist barriers. The products could also have access to ssm, under which there is a provision of quantitative restrictions on importing. India and other countries have insisted on the sp provision before allowing increased market access to developed countries.

But at home, the sp issue has invited unnecessary complications, resulting in problems between states. "Designating certain products as sp is very difficult in a bio-diverse country like India. There are hundreds of commodities that have an impact on food security, livelihood and rural development needs of different regions in the country," says Meena Menon, coordinator of the ngo Global Focus on South. "India trades in 700 agricultural commodities listed under the Harmonization Commodity Description and Coding System (hs) recognised by wto," says Partha Pratim Pal, fellow, Indian Council for Research on International Economic Relations (icrier), Delhi. An estimated 250 of these agricultural commodities are crucial livelihood resources. But under wto negotiations one country can't designate such a large number of products as sps. There is still no clear picture on how many products could become sps.

For India, the predicament is profound. If 3 per cent of agricultural products are allowed, only 21 agricultural commodities could be considered for special treatment. But given the high degree of vulnerability that Indian farmers face, there will be no dearth for candidates seeking the sp and ssm designation. Kerala, for instance, will push vanilla's case, while Orissa will bat for turmeric. The northeastern states will be particularly problematic, because they survive on products that are very localised and to cater to them a large number of products would have to fight their way into the wto list.

G K Pillai, special secretary in the Union ministry of commerce and industry, is fully aware of the complications. He says that there will be serious problems in identifying a small number of commodities if the us and eu have their way . Already, Pillai says, a round of squabbling has broken out between various states. Pillai, who heads India's negotiating team at wto, says a negotiating strategy for sps and ssm is being given high priority.

The question of sps and ssm is crucial because they were negotiated as instruments of levelling the playing field that is currently distorted by the huge domestic and export subsidies that the us and eu give to their farmers making small farmers in countries dependent on agricultural exports extremely vulnerable.

It is perhaps typical of the global trade negotiation system that even the small concessions industrialised countries deign to make, most often get bogged down in definitional quibbles.