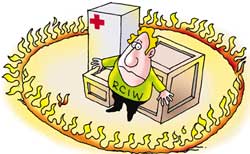 Around 300 Bhopal gas tragedy victims, including women and children, were assaulted by the police on May 17, 2005, while holding a peaceful protest demonstration to demand clean drinking water. Though the Supreme Court (sc) had ruled on May 7, 2004 that gas tragedy victims should be provided clean drinking water, state authorities have done nothing to ensure compliance with the order. As the area's groundwater has been contaminated by the waste lying in the defunct factory premises of the Union Carbide India Limited, people don't have access to any safe drinking water source.

On April 22, 2005, sc's hazardous waste monitoring committee asked Madhya Pradesh authorities to file an affidavit explaining how they will provide water through pipelines to the affected colonies. But they are yet to do so. The victims demand water from the Kolar river reservoir. They held the demonstration in front of the office of Manish Rastogi, director of the state government's Bhopal Gas Tragedy Relief and Rehabilitation department.

The victims, including many women, had entered Rastogi's office and were lodging their protest by beating on plates with spoons, when the police arrived and assaulted them. Some of them were also arrested.