Out of the woods? 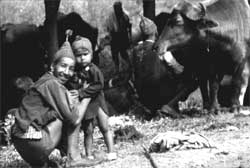 the forest and wildlife statutes of the country finally seem to be making some headway towards becoming more responsive to peoples' needs. The new minister for environment and forests, Jaynarayan Prasad Nishad, in a reply to a question in Parliament, declared that the government is making suitable changes to allow the involvement of local communities in the protection and maintenance of forests. The ngo sector has been pushing hard for precisely such changes, especially in the Wildlife Act.

There have been other positive developments, too, that only add to the prevailing sense of optimism. At a meeting convened by the Prime Minister (pm) Deve Gowda on July 3 at Lucknow, Avdhesh Kaushal, chairperson of the Dehradun-based Rural Litigation and Entitlement Kendra (rlek), presented to Gowda a copy of the Community Forest Management Plan of Protected Area (cfm-pa) for Rajaji National Park, prepared by the local Van Gujjar tribals. This was perhaps the first time that a forest community, with the help of a local ngo and some experts, had officially presented its own vision of how forests should be managed.

The last week of July was marked by hectic activity in Dehradun, as news trickled out that the pm had apparently passed on the cfm-pa to the ministry of environment and forests (mef) and expressed the need to consider it seriously. There seems to be some sort of commotion within the bureaucracy over such a move. But optimism prevailed in the activists' camps.

Meanwhile, the rlek has garnered august support for its plan. In a foreword to the cfm-pa plan, P N Bhagwati, former Chief Justice of India and presently the vice-chairperson, United Nations Human Rights Commission, notes with satisfaction that the cfm plan "has been prepared with the effective participation of the people who are going to be (its) beneficiaries" and its emphasis on forest-people symbiosis, which "would maintain social diversity as well as forest biodiversity".

The cfm plan quotes Principles 22 and 23 on indigenous and local communities from the Rio Declaration (1992), the International Labour Organization Convention 169 of 1989 (Convention Concerning Indigenous and Tribal Peoples in Independent Countries), and the National Forest Policy Resolution of 1988 of the Government of India, to ask for forest management to be transferred to the forest dwellers. The plan, in the process, points out that present wildlife laws, that call for relocation of forest dwellers as a precondition for notification of national parks, goes against all the above conventions and principles.

With the minister's statement in Parliament, the government now seems set to actually amend two laws. The previous (Congress) government had already prepared a draft of a new forest act that has now been widely circulated and debated upon by different groups. One such group initiative has resulted in an alternative forest act, which is being put forward to the mef for its consideration before it finalises its act. Similarly, the government has formed a committee under Ranjit Singh, former secretary in the mef, to look into amendments in the Wildlife Act. Different activist groups working on Wildlife issues have proposed changes in the act that would ensure greater rights and responsibilities to the people. Another committee, set up following a directive by the High Court to look into ways of improving protection and preservation of wildlife, has already submitted its report.