The international clinical trial business could come to India in a big way. The most advanced drugs might be available to Indians as soon as the research is finalised. A lot of Indians could get free treatment, also contributing to the development of new drugs. But given the poor state of regulations in India, the same people could also be used like guinea pigs by pharmaceutical companies. All this could result from a change in the Indian regulations for drug trials on humans 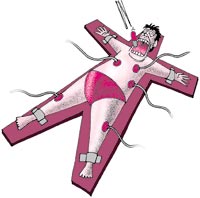 The international clinical trial business could come to India in a big way. The most advanced drugs might be available to Indians as soon as the research is finalised. A lot of Indians could get free treatment, also contributing to the development of new drugs. But given the poor state of regulations in India, the same people could also be used like guinea pigs by pharmaceutical companies. All this could result from a change in the Indian regulations for drug trials on humans.

Most of the research on new drugs is carried out in the industrialised countries. A recent study by Rabo India Finance, a subsidiary of Rabobank of the Netherlands, estimates cost savings of 50-60 per cent if the trials are held in developing countries. While the international clinical trial business is worth us $40 billion, the contract research market is worth us $10 billion.

Drug trials are conducted in three phases (see box: The process). In India, the Drugs and Cosmetics Act of 1940 made sure that the country is one step behind in each phase of trial, meaning that a trial phase could begin only after it had been completed successfully elsewhere. This was done to verify the safety of the drug. In August 2003, the act was amended to allow phase ii and iii trials to happen simultaneously in India and the country of the drug's origin. Now, an expert committee on drug regulation, created by the Union ministry of health and family welfare (mohfw), is said to be recommending that India allows phase i trials without any prior information on its effects on humans.

R A Mashelkar, director general of the Council of Scientific and Industrial Research, heads the expert committee. Mashelkar was not available for comment. But India's drug controller general, Ashwini Kumar, who is also on the committee, said that no such suggestion had been made as the committee hasn't finalised its report yet. "The core issue is that we have to develop a climate of carrying out clinical trials, and educate the people and the ethics committee about these trials," says Kumar.

Just that in India, poverty forces people to sell their body organs and blood. How would India ensure that these people are not exploited by international pharma companies? "We have enough safeguards. People who do not want to be ethical would do so regardless of the laws," says Kumar.

By safeguards he means the ethical guidelines for biomedical research on human subjects, laid down by the Indian Council of Medical Research (icmr) in 2000, and the good clinical practice guidelines of mohfw. According to the icmr guidelines, every research institute has to have an ethical committee, which is responsible for ensuring that trials are ethical. It is not mandatory for researchers to adhere to the 'guidelines'. icmr has proposed turning the guidelines into law, but the health ministry has not taken forward the proposal.

Does this system work? Take the example of the cancer drug trials conducted at the Regional Cancer Centre (rcc), Kerala, in collaboration with the Johns Hopkins University, Maryland, usa. The researchers injected an experimental drug into cancer patients without clearance from the drug controller general, without approval from the institutional ethical committee. A special committee set to look into the matter in India absolved the rcc scientists.

"It is important that the regulations take into consideration the rights of the people on whom the tests are being carried out," says Tripti Tandon of Lawyers Collective, which fights for the legal rights of hiv-positive people. Mira Shiva of the Voluntary Health Association of India says those who carry out human trials need to be made accountable: "Post-marketing surveillance needs to be strengthened to ensure that fake data has not been used to get a drug into the market."