Misuse of insecticides is killing peacocks in Haryana 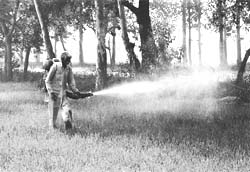 After pesticides were blamed for the decreasing population of vultures, pesticide misuse is now decimating the national bird population. A team of veterinary scientists at the Choudhary Charan Singh Haryana Agricultural University (ccshau), Hissar, has come out with a study that shows ignorance on the part of farmers, while sowing seeds, is killing peacocks.

The researchers say that to protect their seeds from termite attacks, farmers - on advice from farm scientists - treat them with the insecticide chloropyriphos before sowing them. However, the seeds are not sown deep enough in the soil, and are left on the surface, where they are eaten by peacocks and other birds like pigeons and partridges. The researchers say only male peacocks were seen picking up grain in the fields while the females looked after the chicks.

The issue came to light when a mahant (priest) at Rampura village of Mohindergarh noted the death of 13 peacocks in his neighbourhood within a fortnight in November-December 1999. The mahant realised that this had been the trend during the past few years. Fearing a decline in the peacock population, the mahant informed the district administration about the matter. The deputy commissioner of Mohindergarh sought assistance from the agricultural university in Hissar, according to M C Goel, additional director of research at CCSHAU.

The university referred the matter to three veterinary experts: N K Mahajan, M M Matta and Gulshan Narang. The experts found peacocks that had eaten the pesticide-laced grain were unable to fly and fell from trees. The experts also noticed the birds were struggling to keep upright while searching for grain. Among the other symptoms noted were respiratory problems, excessive salivation and diarrhoea characterised by a greenish white discharge. After the symptoms had set in, the birds died within 48 hours.

When the veterinarians went through the post-mortem examination reports, they found evidence of toxicity. Viscera tests revealed that the wheat grain ingested by the birds had high levels of the pesticide chloropyriphos, the toxicity of which was confirmed. The pesticide is an organophosphate and is known to get absorbed very fast, leading to severe diarrhoea, dehydration and death.