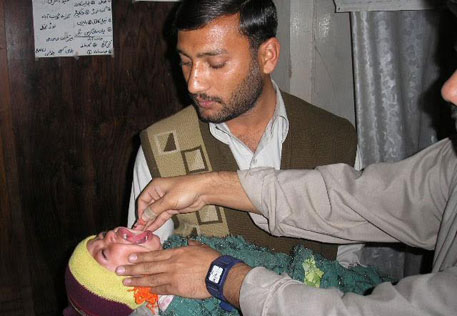 Pakistan seems to be making good headway in the fight against polio. Government officials claim that polio cases in the country have dropped by 70 per cent this year, with only 25 cases reported so far. This has been possible due to the Army’s intervention in areas, particularly in the north, ravaged by militants who are against vaccination programmes, officials told BBC.

In the past, most polio infections in the country have been reported in the north-western tribal region called FATA, or Federally Administered Tribal Areas, a hotbed of militancy. Many health workers and vaccination camps in this region had been targeted by militants, affecting immunisation in the country against deadly diseases. This year, FATA has reported only seven cases of polio, while Karachi has had one.

Ayesha Raza, polio adviser to the prime minister, acknowledged the Army’s help. “With the help of the Army and funds from the United Arab Emirates, we have been able to extend immunisation drives to high-risk areas. Polio samples from high-incidence zones, which used to be positive for months on end, are now testing negative again,” she told BBC.

While the fight against militancy, notably in North Waziristan, has been slow, the rewards were “already visible in the polio programme”, Raza said. According to government sources, in October last year, Pakistan had more than 200 polio cases—the highest in 15 years. Officials attribute this to the vaccination ban imposed by militants, who accuse doctors of being spies and believe vaccinations are part of a Western plot to sterilise Muslims.

“We got access to populations in Waziristan after more than two years. We have also now penetrated some formerly no-go zones in Karachi,” Raza told BBC. Officials claim there has also been a decline in the number of attacks on polio teams in recent months, with a number of men involved in such attacks being arrested.

The latest figures are a reason for Pakistan to celebrate. If the government remains determined to tackle militancy and carry out regular polio drives, Pakistan could soon join its neighbour, India, to become a polio-free country in South Asia.