People refuse to give in to POSCO 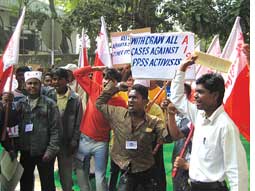 As tribals protested in India, Vietnam set an example

WHILE the Orissa government assured support to the South Korean steel giant posco to set up its 12-million-tonne steel project in the state, the communities likely to be affected staged a protest march in Delhi on November 15. The Supreme Court gave the go-ahead to the project on August 8 this year.

Even as the agitators in India demanded scrapping of the project on grounds of exploitation of tribals' livelihood, Vietnam took a call to scrap a steel plant by posco on environmental grounds following protests.

The region in Jagatsinghpur district of Orissa where the plant is to come up has a viable economy. "The tribals will not give away their land which is used for paddy and betel cultivation," said Sarbeswar Sahoo of Dhinkia village of Jagatsinghpur.

Activists said posco's water requirement would also hurt the villagers. The region's water comes from the Jobra Barrage across the Mahanadi. posco will also get water from the same barrage. "If they get the 300 million litres of water per day they have demanded, it will cause severe water shortage for agriculture," said Jyoti Ranjan Mahapatra, member of posco Pratirodh Sangharsh Samiti, an organization spearheading the anti- posco campaign.

"By giving the go-ahead to the project's forest clearance, the Supreme Court ignored the constitutional rights of the tribals who will lose their livelihood and identity," said Abhay Sahoo, the leader of the organization, before he was arrested (see 'Heavy metal', Down to Earth, August 16-31, 2008). Betel is cultivated mainly on forestland, which is traditional community land in Orissa. The activists said that almost 30,000 families earn about Rs one lakh yearly from these cultivations. "The state government has the right to stall the project in public interest," said Mamata Dash, member of Orissa-based posco Pratirodh Solidarity. The agitators also protested the arrest of Sahoo.

In Vietnam, posco's project was announced around the same time the Orissa plant was proposed. The authorities in January 2008 approved the US $5.4 billion posco steel mill in south-central coast of Van Phong Bay, famous for scuba diving. This triggered protests by residents and tour operators.

In the first week of November, Vietnam's prime minister announced the refusal to go ahead with the project. He added that this was to prevent pollution in the country where rapid industrialization since the 1990s has polluted rivers and air.