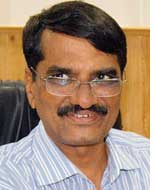 Divisional Commissioner of Aurangabad Bhaskar Mundereceived this year's Vasantrao Naik Pratishthan's Jalsanwardhan Puraskar for his contribution to agriculture by linking of rivers in Dhule district at no cost. He spoke to Ramesh Raut. Excerpts

On linking of rivers in Dhule

In 2005-06, when I was the collector of Dhule district, people faced severe water shortage due to a drought-like situation. But the neighbouring Nashik district received heavy rainfall; its rivers and dams were overflowing. It was then that we (the administration) decided to link the Girna river, which flows through Nasik, with the Bori river in Dhule.

During the British rule, Dhule was full of dykes and small canals. We revived these existing canals and nallas to link the rivers. Water overflowing from Girna dam in Nashik was released into a 53 km-long canal. From here the water was directed to the Bori through a drain. People used the water flowing through these canals for irrigation.

On how the project solved the drinking water problem

Dhule has a lake and a dam reservoir; both had dried up. We diverted water from another river flowing through Dhule, the Panjara. Using canals and dykes, we diverted its water up to 57 km and fed the Nakane Lake. The replenished lake now meets the city's drinking water needs throughout the year. The Sonwad dam reservoir was filled likewise. About 640,000 people in 116 villages in Dhule have benefitted. Earlier 500 to 600 tankers used to supply drinking water in Dhule district. After the project, tankers have reduced to 19.

On how the idea originated

I organized a meeting with villagers at Shirud, 30 km from Dhule city, to find solutions to the water crisis. Over a thousand villagers attended the meeting. They suggested linking the two rivers. Based on their suggestions, I prepared the detailed plan.

On the cost of the project

Nothing. The project did not require any land; there was no new construction. It was the brainchild of the people and they completed it in three months. Nashik residents too don't mind parting with the extra water.