Only 120,000 birds have congregated at the Nalabana sanctuary in Odisha this year 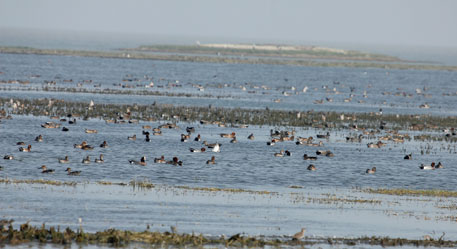 Cyclone Phailin, which hit Odisha on October 12, not only affected people in the coastal areas of the state but also cast its shadow on the winged visitors of Lake Chilika. The decreasing number of migratory birds in the country’s largest brackish water lagoon has left many ornithologists worried.

Though the heronry or the breeding ground in the lake's core island of Nalabana is abuzz with chirp and cacophony, the number of birds flocking the internationally-acclaimed 1,100-sqkm lake has reduced considerably. Experts believe that topographical changes triggered by the storm have made the lake a less-preferred destination for the winter migratory birds.

“This winter, the bird population in Chilika has come down because of almost two feet rise in water level in the breeding ground of migratory avian species at Nalabana within Chilika. The high water level at Nalabana is not favourable to the birds that land and forage in the wetlands. The floods that followed incessant rains triggered by Phailin brought large quantities of decayed vegetation and hundreds of fishing nets to Nalaban. The boundary of the Nalaban Birds Sanctuary was also washed away by the Phalin,” said S Balachandran, deputy director at Bombay Natural History Society (BNHS).

BNHS has been conducting a study on birds of Chilika, in collaboration with the Chilika Development Authority (CDA) and the wildlife wing of the forest department under Integrated Coastal Zone Project (ICZM), for the past two years. “The organisation which got Rs 1.10 crore for the five-year-long study is now mapping the impact of the cyclone on the birds,” added Balachandran.

“The shores of islands within the lake are major breeding grounds for the migratory birds. When the cyclone hit Odisha on October 12 and caused incessant rains, the shores were left swollen with water. In the current phase of study, BNHS is examining the effects of cyclone Phailin on the reproduction of the birds. We suspect that the storm has destroyed nest sites and that is bound to have a strong impact on the breeding of birds,” added the official.

He also explained that Nalaban is known world over as an ideal breeding place for many species of birds like black-winged stilt, gull-billed tern, little tern and river tern. But these birds have now abandoned their nests because of high water level. The strong winds during the time of cyclone also forced many birds to move away from their usual roosting places and settle elsewhere.

Around 120,000 birds of different species have congregated at the Nalabana sanctuary and other parts of the lake this year so far. Last winter, around 877,000  birds of 180 species visited the Chilika while 346,000 of them were sighted at the 15.59-sqkm Nalabana.

The expert also said that during their previous study on birds in Chilika, the scientists of BNHS had managed to trace the routes of migratory birds to China and Mongolia through satellite transmitters. Each winter these birds fly thousands of kilometres to reach the Chilika Lake”, added S Balachandran.