Pitfalls of a uniform food regime

In face of drought and rising food prices, attention shifts to local diet and food diversity 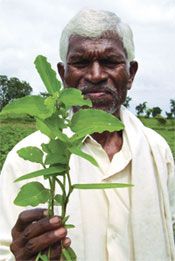 AS SEVERE drought sweeps parts of India, Russia and the US, fanning fears of a repeat of the 2007-2008 food crisis, attention has shifted to local foodgrains, vegetables and shrinking food diversity.

Though loss of food diversity has been in discussion since the World Food Summit of 1996, the current dry spell has given it an emergency revival. August saw a series of efforts at the national and global levels for revival of local food biodiversity to fight not only scarcity but also malnutrition, a major concern for India and other developing countries. Early in August, the ministries of rural development and panchayati raj issued public advertisements, urging panchayats to hold at least one gram sabha meeting on nutrition and bring back long-forgotten local crops into diet to fight malnutrition.

At the global level, the UN’s Food and Agriculture Organization (FAO) has brought out a report on food diversity and sustainable diets. The report indicts the current model of agriculture for not being effective in ending food scarcity and malnutrition. It cites the food crisis of 2008 and the shortage of food during the 2011 nuclear crisis of Japan as examples of how a uniform food regime could make millions vulnerable to food shortages. Various estimates, including that of FAO, show the 2008 food crisis pushed some 100 million people into hunger. The report was released just before FAO issued its monthly global Food Price Index in the second week of August. The index reported six per cent increase in food price after three months of consecutive decline.

But despite food inflation, it is possible to stave off malnutrition. “People who survive on local plants and vegetables never die of starvation,” says S M Mohnot, director of the School of Desert Sciences in Jodhpur. But more and more people now rely on food that are not harvested locally but obtained through government foodgrain distribution systems. “It ensures food security. But vanishing local food makes people vulnerable to malnutrition,” Mohnot says. In a drought year, as nature’s response to crisis, local plants and vegetables grow faster. People dependent on them tide over the drought, he adds. The local produce has another advantage: it is inflation neutral as people collect it from the wild or procure it from local markets at a cheap rate.

Over the last few decades, diets across the continents have shrunk to just a few crops. Of the 300,000 plant species available on Earth, some 10,000 are used for food. Of this, 150-200 species are commercially exploited, with 30 crops providing 90 per cent of the world’s calorie intake. The world sources 60 per cent of the plant-based dietary energy from just three crops, wheat, rice and corn. “Intensification of agricultural systems has led to a substantial reduction in the genetic diversity of domesticated plants and animals in agricultural systems,” says Bruce Cogill of Biodiversity International.

“India’s tribal population, usually the poorest in the country, still has access to a large number of local crops and vegetables, which ensure their food security. But with new agriculture and food distribution systems taking over, the new generation of tribals have lost the knowledge,” says Palpu Pushpangandan, former director of the National Botanical Research Institute in Lucknow.

There are two major concerns with the food basket becoming limited. First, it prompts farmers to abandon traditional crops and discourage procuring diverse food from the wild. During times of crisis, people have limited options. Those who fail to buy adequately diverse foodgrains and vegetables would thus suffer from malnutrition. Secondly, without the revival of other crops that were used earlier, the world may not be able to meet the huge demands in future—it needs a 70 per cent increase in agricultural production by 2050. The FAO report says there is too much focus on the quantity of foodgrains to attain food security while leaving behind the concern of nutrition, which will come from much more diversified diets consisting of lots of vegetables and other plant-based sources. “The alarming pace of food biodiversity loss and ecosystem degradation, and their impact on poverty and health makes a compelling case for re-examining food-agricultural systems and diets,” it notes.