A polluting industrial unit in Gujarat continues to operate, despite the state Pollution Control Board issuing notices to shut it down 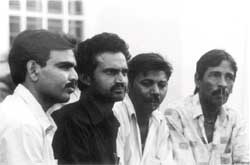 a polluting industrial unit in Gujarat continues to operate with the help of a minister, despite the Gujarat Pollution Control Board (gpcb) issuing notices to shut it down. In a bid to close the unit, the board suspended its production and cut its power supply. But a mere phone call allegedly made by a Gujarat minister restored the unit's power.

Hema Chemical Industries, based in Vadodara, was till recently operating in total violation of an order issued by the gpcb on July 25, 2001. Despite evidence that the unit dumped highly toxic solid waste in the heart of the city, the authorities are struggling to bring them to book. "Following a number of complaints filed by members of the Vadodara-based Paryavaran Suraksha Samiti (pss) and several other organisations, we cancelled the authorisation of the unit. This, in effect, meant that it was to close production. But it did not comply with the order," said Y A Tai, environmental engineer of gpcb.

"The company was then asked to submit an environment impact assessment report and subsequent to which the working of the industry was suspended under the Environment Protection Act, 1986," he added. But the company continued production. The gpcb then asked the Gujarat Electricity Board (geb) to cut the unit's power supply. However, this did not affect the unit's functioning as it switched to generators and on the second day its power was restored. Says Tai said: "It is indeed alarming that power was restored in such a manner." According to the members of pss, the minister in question, Kaushik Patel, is now trying to wash his hands off the situation, due to the pressure built up by the media.

On September 20, 2001, the unit's power supply was stopped once again by geb and now the unit is said to have suspended its production. This may come as a respite to environmentalists, who have for long protested against the unit's illegal activities. "It is a fight to the finish. We are not going to leave a single stone unturned in order to ensure that action is taken against the culprits. We have been threatened, but all this is inconsequential," said Rohit Prajapati of pss.

Nine workers of the unit have lost their lives in the last two years due to chromium pollution. pss claims that many of the unit's workers suffer from nasal perforations and severe dermatitis as they are constantly exposed to the chromium. S K Varma of the factory inspector's office of Vadodara has corroborated this. The pss and the Peoples Union for Civil Liberties (pucl) allege that the industry has been continuously violating the provisions of the Factory Act. Chromium levels are not regularly monitored and the technology adopted by the company is unsafe.