Residents take to burning waste after orders to not dump it in Kameng river; facility to handle waste incomplete due to lack of funds 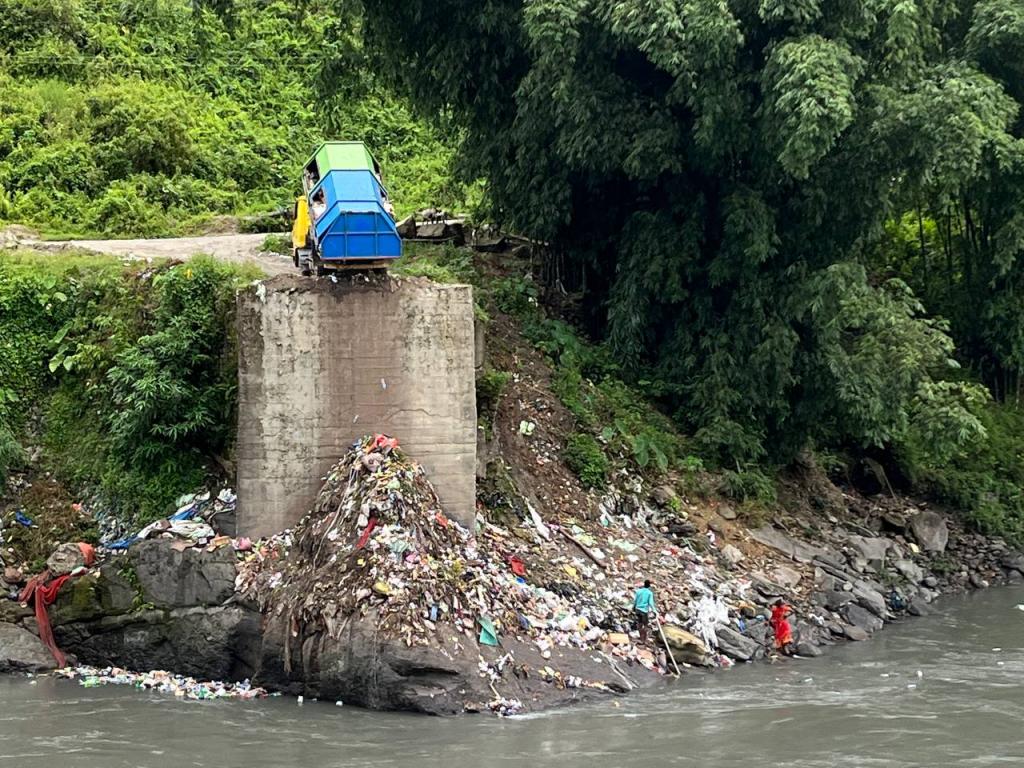 Garbage being dumped on the banks of Kameng river. Photo: Ranju Dodum

Arunachal Pradesh’s Seppa town doesn’t know what to do with its garbage. Its materials recovery facility (MRF) to segregate, recycle and repurpose waste is not functional due to a paucity of funds. Following orders to stop dumping waste in the Kameng river, many locals have taken to burning it — creating a new air pollution problem.

The State Pollution Control Board August 29 directed the East Kameng administration to ensure better waste management of solid waste. The notice stated no garbage could be thrown into the river or burnt.

Two years later, residents noticed that the river’s waters had turned black and that a large number of fish were dying. There were a number of possible explanations, including an avalanche in the higher regions where the river flows through, to possible glacial movement and resulting erosion.

Read more: Manipur’s Ukhrul faces a gargantuan waste problem; here is how it can solve it

However, an official government study found that factors including human activities may have affected the river’s turbidity. Raw sewage and solid waste disposal into the river at a place close to Seppa might have led to a high coliform load in the water, according to the study.

The agency was asked to explain why it was still dumping garbage in the Kameng river as it had been directed “not to do so” by the deputy commissioner’s office. Incidentally, the district deputy commissioner is also the DUDA’s chairperson by default.

Within a week of the notice, garbage collection from residences in Seppa stopped.

“Garbage collection had to be stopped since there was no alternative to dumping it in the Kameng,” said DUDA’s Executive Engineer Tarh Hachey. “The MRF in Pampoli on the outskirts of Seppa is not functional.”

In a meeting April 2021, it was decided the MRF would not be used until a boundary wall was constructed, Hachey said.

Children and cattle would often enter the premises and be at risk as there is no boundary wall. Residents had also complained about the odour of burnt garbage from the site, which had become a breeding ground for houseflies and other insects.

The issue was raised at “every meeting” to his supervisor (chief engineer) and the deputy commissioner’s office as recently as May 3 this year, said Hachey.

“I had requested higher authorities for providing at least Rs 25-30 lakh to build a temporary chain-link fence around the MRF,” the executive engineer said, adding that funds should be sanctioned even “if all other additional works cannot be sanctioned at this moment”.

The engineer also claimed he acted under the deputy commissioner’s orders to submit a proposal seeking Rs 75,00,000 for “additional work at the MRF” on May 11, 2022.

Over Rs 6 crore was sought for “additional works” in April 2022 but there was no response to the proposals, Hachey alleged.

In a meeting October 2020, it was decided that garbage will be disposed of near the Nicham Sonam bridge until an MRF and/or a sanitary landfill becomes functional, he further claimed.

He has “no alternative but to suspend the day-to-day collection and disposal off the garbage of Seppa Town till further order”, Hachey wrote August 16, adding no garbage will be dumped in the river.

He has been “unable to operationalise the MRF at Pampoli, due to non-fulfilment of the agreement made to the public,” the executive engineer wrote in another circular.

Ever since the garbage collection stopped, residents of Seppa have taken to burning their garbage in front of their homes. One resident said that this has affected the air quality in the town.

Groups like Kameng River Rejuvenation Club, which works on cleaning the Kameng, and Youth Mission for Clean River (YMCR) have sought solutions to the issue.

Read more: Supertech: It is essential to mitigate pollution, waste post-demolition; here is why

YMCR filed a complaint with the state pollution board August 22, seeking its intervention in the matter. “Repeated dumping of medical and domestic wastes in this river” has been going on for years,” it said.

The Arunachal Pradesh pollution board had issued orders after the YMCR complaint. “Immediately stop dumping of solid waste into Kameng river,” the board told the district administration. It also asked Solid Waste Management Rules, 2016 be adhered to in the town.

People should not “throw, burn or bury the solid waste on streets, open public spaces or in the drain, or water bodies”, the order said. This effectively prohibits people from burning their garbage as they have been doing lately.

“The work on 99 per cent of the MRF has been completed,” Polumatla told the media. “The MRF becoming a breeding ground for flies and mosquitoes is a result of the ‘open’ dumping of garbage. A sanitary landfill will be built to temporarily resolve the matter.”

The original detailed project report of the MRF did not factor in a boundary wall, he said.

“Even though four Members of Legislative Assembly have each contributed Rs 10 lakh and Rs 20 lakh has been sanctioned from the deputy commissioner’s untied funds, more money is needed,” said Polumatla.

I have already written to the state government on August 11 seeking additional funds to make the MRF operational, he added, condemning the dumping of waste into the Kameng.

While he is the chairperson of the DUDA, he alleged he was not aware under whose orders the agency was acting.