Pollution Control Board (PCB), Assam June 20, 2020 directed Oil India Ltd (OIL) to close down production and drilling at its Baghjan oil field. The state-owned oil and gas company will move the Gauhati High Couty against the order, officials said.

The PCB cited damages to aquatic life and endangered species as well as negligence and carelessness towards human life and property in a letter to the company.

An oil-and-gas well, owned by OIL, at Upper Assam’s Baghjan village caught fire on June 9 after leaking for about a fortnight. More than 9,000 local residents were evacuated and continue to live in relief camps. The Dibru-Saikhowa National Park and Maguri Motapung wetland, less than a kilometre away, in the vicinity has been under threat due to accident.

The PCB directed the company to do whatever was necessary to extinguish the fire. OIL officials had earlier informed Prime Minister Narendra Modi that the well would be capped on July 7.

The blowout, during operations to extract gas from a new sand (reservoir bearing oil and gas), and its aftermath cast a shadow over OIL’s Rs 5,000-crore expansion plans in the area.

OIL spokesperson Tridiv Hazarika in Duliajan confirmed the receipt of the closure notice, which alleges:

You have nonchalantly violated the provisions of law in force causing pollution to the environment… you are directed to CLOSE DOWN all the production as well as drilling operations of your all installations of Baghjan Oil Field forthwith.

OIL has drilled 23 wells at Baghjan since exploration started in 2003, according to a company document. Currently there were 21 producing wells — 17 of crude oil and four of natural gas, including Baghjan 5 where there was the blowout — Hazarika said.

The PCB earlier turned down OIL’s request to extend the deadline to reply to its June 10 show-cause notice. The latest notice to the company’s resident chief executive alleged the company was operating without the board’s — violating the Water Act, 1974; the Air Act, 1981 and the Environment (Protection) Act, 1986. 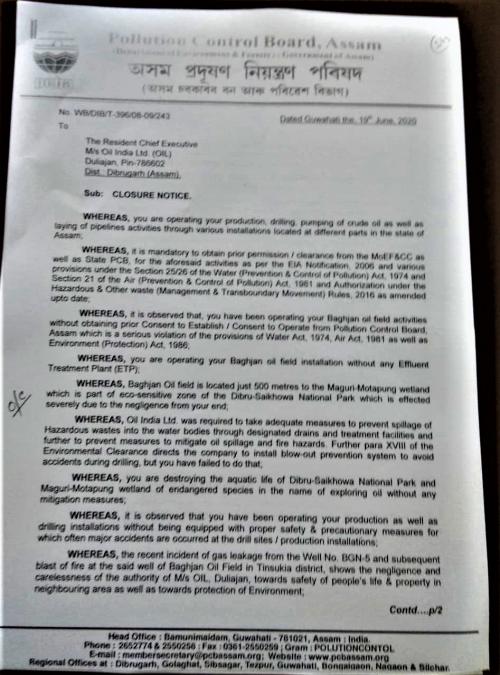 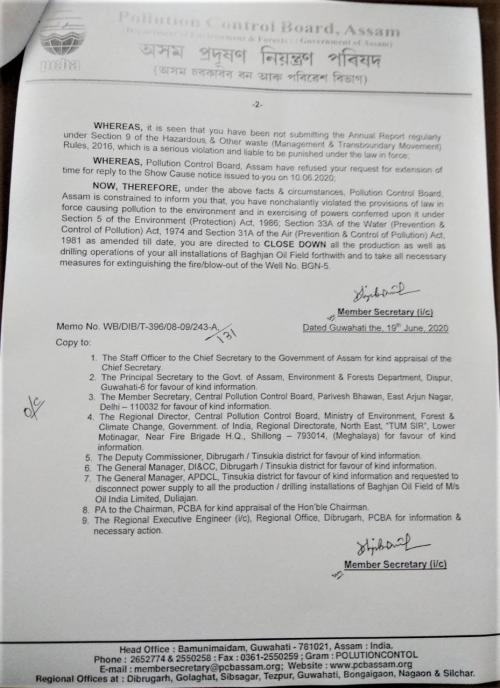 The Pollution Control Board, Assam notice to Oil India Ltd over the Baghjan fire

The PCB flagged the absence of any effluent-treatment plant though the company was supposed to prevent spillage of hazardous waste into waterbodies at the ecologically sensitive area: “… you are destroying the aquatic life of Dibru-Saikhowa National Park and Maguri Motapung Wetland of endangered species in the name of exploring oil without any mitigation measures.”

An OIL official, who did not wish to be named, expressed surprise at the PCB citing such violations now despite the wells operating for close to two decades.

The official did not comment on the notice but said: “We will seek relief from the court. We routinely interact with PCB, take them to our facilities for inspection.”

The official said the wells couldn’t be killed instantly and hinted at losses: “It takes time and once you kill the wells, the process is irreversible.”

OIL and the governments in Assam as well as at the Centre are assessing and inquiring into the May 27 blowout and subsequent ecological damages.

Conservationists have alleged damages to local ecology. The Maguri-Motapung wetland is classified as an important bird area.
A preliminary report by Wildlife Institute of India claimed the accident has “severely affected the health of water, forests and grasslands.” It said the area was home to:

“The spill has resulted in mass mortality and severely impacting the environmental condition resulting in debilitating conditions for species to survive,” the WII report notes.

It added that toxic fumes and oil coating have universally affected flora and fauna and the toxins pose long-term risk.

An OIL statement on June 20 noted various studies and assessment, including an environment and ecological survey, a study by non-profit The Energy Research Institute (TERI) on air quality and noise level and a seismological study even as locals complained of tremors.

There have been protests since the well caught fire. An OIL statement June 20 noted a blockade at the site. A day earlier, it claimed disruptions at 30 oil wells and five gas wells. It claimed to have lost 7,627 tonne oil and 9.87 million standard cubic feet metres per day natural gas since May 27 due to disruptions.

The blowout, meanwhile, may take more than two weeks to be brought under control. Representatives of Canadian well-control firm Alert Disaster Control were flown in to help plug the leak amid criticism of OIL’s in-house capacity to deal with such accidents.