Most patients complained of throat pain and breathing problems 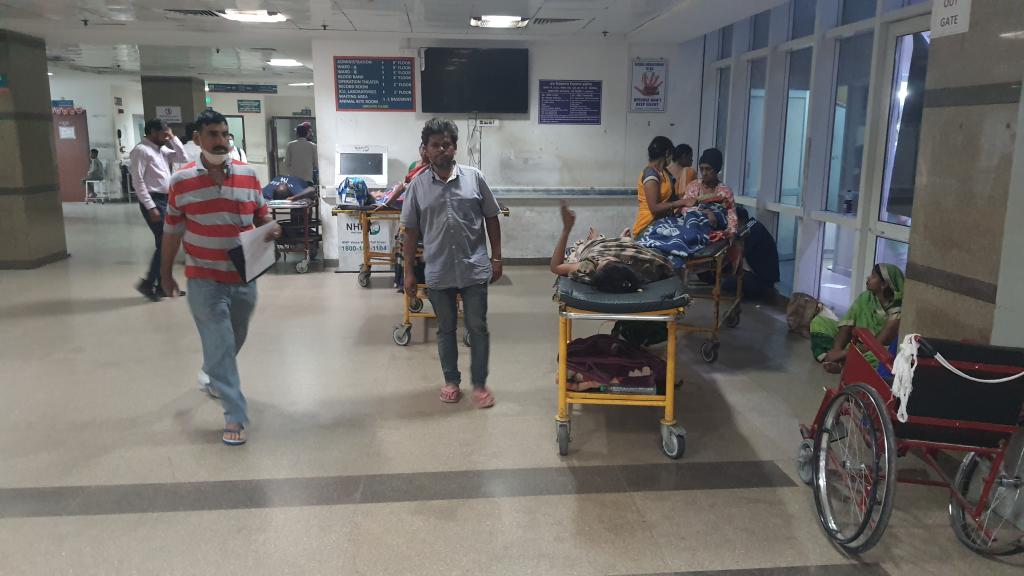 Delhi’s air pollution caused by bursting of firecrackers on Diwali and stubble burning in surrounding states has an immediate impact on human health. This is apparent from the increased emergency cases and hospital visits at hospitals on the day of the festival every year.

This year wasn’t an outlier, although the 24-hour average air quality index (AQI) for Diwali the second-best in seven years, according to the news agency Press Trust of India.

Down To Earth (DTE) visited city hospitals on the night of October 24, 2022 (Diwali) to understand the extent of the impact this year.

Some children with breathing difficulties were waiting at the general ward of Sardar Vallabh Bhai Patel hospital at around 8pm. “Every year, October 15 onwards, we witness a spike in the number of cases of patients suffering from chronic obstructive pulmonary diseases — which also includes asthma,” said the hospital’s chief medical officer, Kumar Saurav.

There was a slight increase in the number of emergency cases in the hospital this Diwali, he added.

Overall, across Delhi on Diwali day, there has been an increase in the number of patients with upper and lower respiratory disorders. Many of these are children, particularly those in the age group of 5-7 years.

“Most of the patients are found with throat infection, breathing issues or bronchitis, bronchial asthma, sore throat, conjunctivitis, skin allergies such as dermatitis,” he added.

The number of hospital admissions do not convey the entire extent of the effect of Diwali pollution, Bagai said. “A vast majority of patients impacted by the sudden increase in air pollution may not visit hospitals but opt for treatment at home.”

Delhi’s air quality was in the ‘very poor’ category on the day of Diwali and is likely to remain so up to October 26, according to System of Air Quality and Weather Forecasting And Research (SAFAR).

In Anand Vihar — one of the 35 monitoring stations in the city — the air quality index stood at 346 at 10 am on October 25, which comes under ‘very poor’ category, according to the average 24-hour Air Quality Monitoring Index bulletin released daily by the Central Pollution Control Board (CPCB).

Stubble burning is considered one of the most prominent sources of air pollution and has attracted media flak and policy intervention. The Gurugram administration, for instance, announced a penalty of Rs 2,500 per acre on farmers burning crop residue.

Green crackers were introduced several years ago to replace traditional crackers, which release much more noxious chemicals while burning. But illegal trade of the polluting crackers was observed even this year.

Vendors on Qutub Road in Sadar Bazar, a popular wholesale market for firecrackers, claimed the ban on traditional crackers has been strictly followed this year. Most of them are selling only decorative lights this season, they told DTE.

Right at the end of the market, however, some unlicensed sellers had set up stalls for firecrackers. Individuals were seen standing with open cartons of banned varieties of crackers in at least 12 dimly-lit spots in Outer Sadar Bazar and some more in Bazar Guliyan near Red Fort.

Most of them seemed to have heard of green crackers for the first time.

Regulated crackers markets in Faridabad and Noida didn’t have counters selling banned crackers but in interior areas like Faridabad Sector 36 and Aimnabad in Greater Noida, sales were made in black.