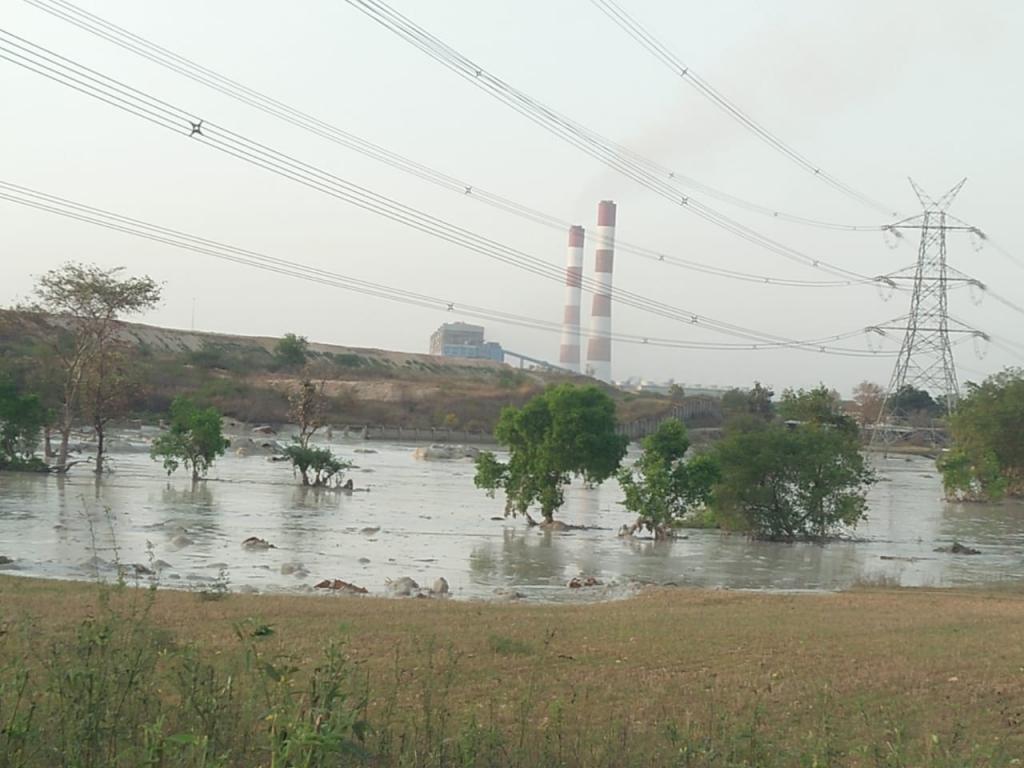 Ash dyke breaches at two coal-based power plants in Madhya Pradesh in 2019 and the subsequent assessment of the environmental damage cost from the breaches pointed to the need for effective deterrence to ensure full ash utilisation by these plants.

A Central Pollution Control Board (CPCB) and Indian Institute of Technology, Roorkee joint committee submitted its report to the National Green Tribunal (NGT) September 8, 2020 on the cost assessment of environmental damage from the two breaches.

The tribunal earlier directed Essar Power Ltd through an August 20, 2019 order and Vindhyachal power plant through a July 16, 2020 order to pay an interim compensation of Rs 10 crore for damage.

Similarly, water pollution and damage costs were estimated on the quantum of water that was polluted from the discharge of ash slurry. The quality of water was assessed to find out if there was any heavy metals contamination. The amount of suspended solids build-up due to ash slurry was also assessed.

Ash dyke from both plants was breached due to the increased volume of water in the ash pond after spells of heavy rain, according to the findings of the committee. Based on the estimation done, the amount of breached slurry from the Essar power plant’s ash dyke was about 97,200 tonnes. About 50 hectares of area used for crop cultivation was affected by the spread of this slurry, that also contaminated the nearby Jaria, Garra and Mayer rivers.

Ash slurry from the Vindhyachal plant’s ash dyke breached to about 33 hectares, with some quantity that reached the Rihand reservoir. A total of 225,000 tonnes of ash breached out from Vindhyachal plant, according to estimations.

The joint committee was formed on the NGT’s directions issued in its February 12 order. In the same order, the NGT directed thermal power plants to take prompt steps for scientific disposal of fly ash, warning that failure to do so will result in penalty.

The tribunal said non-compliant plants will need to pay environmental compensation determined from the December 31, 2017 cut-off date stipulated in a notification by the Union Ministry of Environment, Forest and Climate Change for full utilisation of fly ash.

In the same hearing, the NGT asked the CPCB to determine the environmental compensation cost methodology for non-complying power plants for the full disposal of fly ash. Disposal of stocked fly ash had not yet begun, the committee, with reference to the fly ash dyke breach, said in its earlier November 2019 report.

It also said fly ash was the main cause of air pollution in the Singrauli-Sonebhadra area and no sincere efforts were made for the proper disposal of fly ash by the thermal power plants since their installation.

The Singrauli-Sonbhadra area has at least nine major thermal power stations. More than half the capacity in the area is relatively new and was added in the past 10 years. More capacity addition and the presence of many large-capacity plants led to an increase in the amount of coal consumption, subsequent fly-ash generation and its overabundance in the area.

This led to extensive damage to fields and contamination of freshwater sources with toxic ash slurry. Sudden ash flooding to nearby settlements led to loss of lives on some occasions as well.

The adverse effect of fly-ash mismanagement is, today, well-acknowledged in courts and by public authorities. In the wake of the frequency of such incidents, the NGT passed orders directing all power plants to take steps for scientific disposal of fly ash or pay compensation for non-compliance.

Though the last date for achieving full utilisation was December 31, 2017, this date was not extended, leading to the non-compliance of norms by many plants and states.

Plants were also directed to furnish action plans for full utilisation in an environmentally sound manner.

The NGT responded to non-complying power plants and those who faced litigations by imposing penalties on them. The penalties imposed on plants in past two-three years, however, was not an effective deterrent as several plants were still far from meeting the full utilisation rate. They continued to pollute immediate surroundings with ash.

To ensure compliance, stricter penalties, closing down non-complying plants and more strict monitoring of such plants can prove to be an effective deterrence system.

In order to reduce incidents of fly-ash breach and enhance adoption of fly-ash-based products, important steps and measures must be taken at both the plant level and by regulatory bodies at the Union government and state level.

Measures in the form of stricter regulations, strict enforcement and monitoring and more incentives can be a major driver for efficiently managing ash and promoting fly-ash use.

An analysis by Delhi-based non-profit Centre for Science and Environment (CSE) found the countrywide unused ash stock from thermal power plants in the past 10 years amounted to as high as 627 million tonnes. This was almost three times the current ash generation of 200 million tonnes per annum.

The total quantum of unused ash from the coal power sector was as high as 1,647 million tonnes as of March 31, 2019, according to a December 2019 report submitted to the NGT. This was almost eight times the current ash generation.

The overabundance of ash might aggravate in the future with recent government orders of doing away with mandatory coal washing and opening the coal sector for commercial mining by private players. This will indirectly lead to more ash generation, said Nivit Kr Yadav, director of CSE’s industrial pollution unit.