The most serious pollution threat to groundwater was from calcium, chloride and iron, associated with sewage and pollution from tannery waste

Tiruppur is one of the two industrial clusters in Tamil Nadu that faces both water and land pollution. Photo: Wikipedia

Groundwater is becoming more polluted in Tamil Nadu’s industrial areas and Vellore is the state’s most polluted district in terms of river pollution, according to a new study by Delhi-based thinktank, Centre for Science and Environment (CSE).

CSE did an assessment of Tamil Nadu CEPI scores. CEPI (Comprehensive Environmental Pollution Index) is a rational number to characterise the quality of the environment at a given location following the algorithm of source, pathway and receptor. An increase in CEPI score denotes adverse effects on the receiving environment.

Five industrial clusters in Tamil Nadu were found to have a water score of more than 50. Three of these — Vellore-North Arcot, Manali and Tiruppur — were  ‘critically polluted’ and two — Cuddalore and Coimbatore — were ‘severely polluted’, according to the CEPI water score 2018.

Vellore, the most polluted district in Tamil Nadu in terms of river pollution, was home to 240 tanneries, 17 red category industries and small-scale chemical industries, according to CSE.

Partially treated industrial effluents, combined with sewage and other wastes were being discharged directly into surface water according to the study, Assessment of groundwater quality in some towns of Vellore district, Tamil Nadu, India.

This had caused severe groundwater pollution in the industrial belt. The most serious pollution threat to groundwater was from calcium, chloride and iron, that are associated with sewage and pollution from tannery waste. 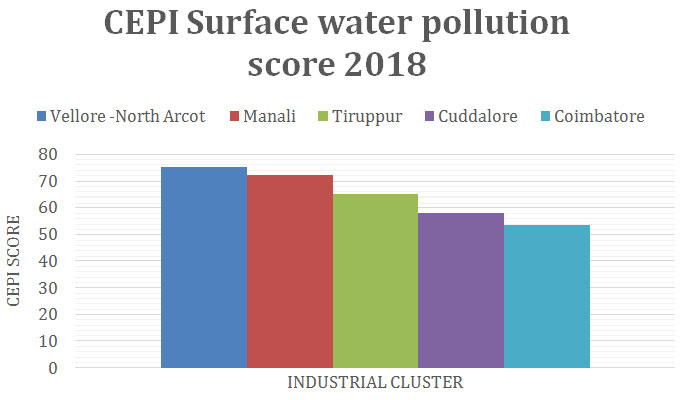 CSE also found that five industrial clusters in Tamil Nadu had a land score of more than 50. For arriving at land score, ground water and soil quality was considered.

The Manali industrial area was one of the most polluted areas identiﬁed by the Central Pollution Control Board (CPCB). About 300 industries had come up in this area, including chemicals, plastics, petrochemicals, refineries and fertilisers.

Some well-known industries like Madras Fertilizers Ltd, Madras Petrochemicals Ltd and Madras Reﬁneries Ltd had also ﬂourished in the area during recent years.

Manali was extremely contaminated due to several years of random dumping of hazardous waste and free discharge of efﬂuents on land by industries. The high amount of toxic metals in the environment might have also caused an increase in their presence in groundwater as a result of leaching. 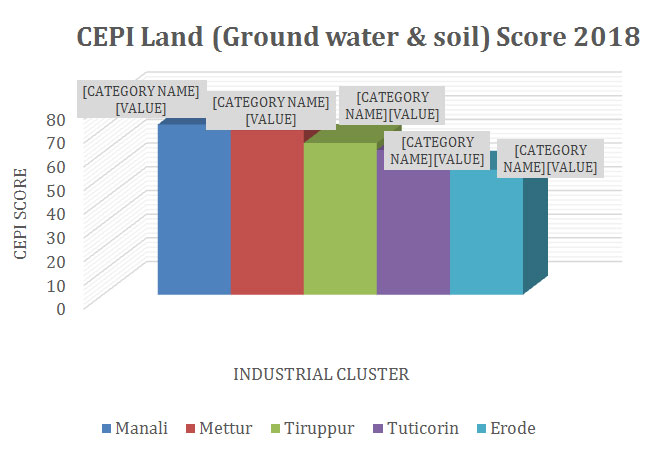