Industrial accidents: Time for Neyveli Lignite to take a call

Management should decide the fate of the old plant units immediately

The boiler at unit 5 of stage 2 of the plant had exploded early morning when workers were about to resume operations, killing six and injuring 17. A press release from NLC, that runs NLTPS, said unit 5 was shut and undergoing maintenance, when the incident occurred. 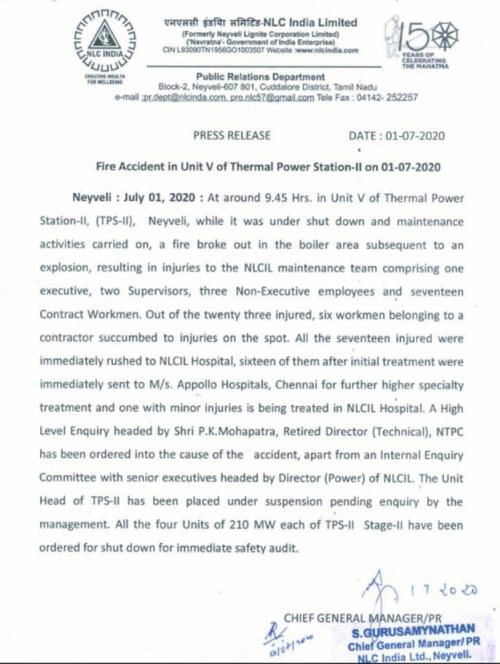 The press release issued by NLC on July 1, when the accident at NLTPS occurred

The official Twitter handle of the government-run plant, however, said maintenance activities were carried out in unit 6, when a fire had broken out in unit 5.

Delhi-based non-profit Centre for Science and Environment reached out to the Directorate of Industrial Safety and Health (DISH), but an official for the department refused to divulge any information.

Two committees (internal and external) were set up to investigate the incident, according to an official from the Tamil Nadu Pollution Control Board (TNPCB). The exact reason for the accident could not be ascertained by the TNPCB officials who visited the site, said the official.

It may have occurred due to the cleaning of the bottom ash in the boiler hopper, the official pointed out. This was, however, not confirmed, as investigation reports are yet to come.

Two explosions had occurred at the same plant earlier. A report by Down To Earth highlighted maintenance and safety issues in the plant and pointed out that a majority of the units were 25-60 years old.

Unit 5 — where the accident occurred — was commissioned more than 30 years ago, during 1988-93. The unit was already considered for retirement as no space for instillation of pollution control technologies was available.

Questions, thus, emerge over why no phase-out plans have been chalked out for such over-aged, unproductive and inefficient units.

What actions did the plants take in the past eight-nine years to avert such incidents? Why were the lives of the workers put at high risk?

There have been labour issues in the past, with workers striking over a demand for revising wages and many other reasons. It is possible for the operation and maintenance of the plant to have been affected by these problems.

The plant was also shut for some time due to unrest among workers. The safety and health of the workers, maintenance of the plant and management at NLC aggravated and worsened due to these reasons, something the accidents seemingly reflect.

The thermal power plant sector is considered to be one of the most organised. The occurrence of fatal accidents at such a high frequency indicates the time for a decision by the plant management on the operational health of the plant and decide the fate of the different units.

It will be in the interest of the management and the work force at the plant, as they risk their lives just being there.

There have been a series of accidents after lockdown measures to curb the novel coronavirus disease (COVID-19) were eased or removed. Some industries are seemingly not prepared for restarting their factories with proper protocols in place, resulting in the loss of life, as a string of accidents across the country have revealed.

An explosion at a pesticide factory in Gujarat’s Dahej had left eight dead and more than 50 injured June 3. Yet another blast at a chemicals factory in Ankleshwar occurred June 11, leaving one dead and four injured.

Two gas leaks in Andhra Pradesh’s Visakhapatnam revealed gaps in safety measures as well. The leak of styrene gas on May 7 at a chemical factory owned by LG Polymers Ltd left 11 dead, with thousands hospitalised.

Heavy penalties by the National Green Tribunal or action by state pollution control boards have not made a difference, with the accountability lacking across several industries.

It is also time to revisit and strengthen existing systems for maintaining safe working environments.