Emissions increase 9% compared to last decade; atmospheric concentration rises by 1,875 parts per billion from the 1850s

The amount of methane in the Earth’s atmosphere has continued to rise, with 576 million tonnes of the gas added every year between 2008 and 2017, showed two recent studies from the Global Carbon Project.

Emissions increased nine per cent compared to the last decade, according to the studies. The atmospheric concentration of the gas occurred for more than a century, the studies pointed out.

While methane emissions briefly stabilised between 2000 and 2006, concentrations of the gas in the atmosphere now exceed 1,875 parts per billion or about 2.5 times that from the 1850s.

Methane is responsible for a quarter of global warming that occurred since the 1850s, according to climate scientists.

All known data about methane was gathered by researchers from emissions inventories, atmospheric measurements and models. This data was then collated to form a global ‘methane budget’ that detailed the processes that added and removed the gas from the atmosphere.

Raising livestock, increase in coal mining, landfills, oil and gas production were the specific activities linked to the greatest increases, according to Benjamin Poulter, coordinator of wetland methane emissions estimates for the Global Carbon Project. 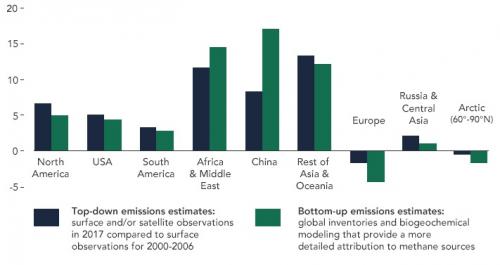 “The increase was primarily fuelled by human activities, especially agriculture and fossil fuels,” said Poulter, who is also a scientist at US space agency National Aeronautics and Space Administration.

Agriculture — including manure management and enteric fermentation — made up 24 per cent of the emissions, while landfills were responsible for 11 per cent, the study noted.

Tropical regions in three continents — Africa, Asia and South America — were responsible for 64 per cent of the entire planet’s emissions, while temperate regions and the Arctic contributed to 32 per cent and four per cent respectively.

Large amounts of carbon are contained in the Arctic’s frozen soils (permafrost) and forest vegetation.

Water-logged soil — once it begins to thaw — creates conditions ideal for methane production. Abnormal methane emissions in higher-latitude regions are yet to be found “despite thawing permafrost and record-breaking air temperatures year-after-year,” said Poulter.

NASA’s Arctic Boreal Ecosystem Vulnerability Study researchers, however, made hyperspectral airborne observations and found millions of sources of methane around small ponds and lakes in Alaska and western Canada.